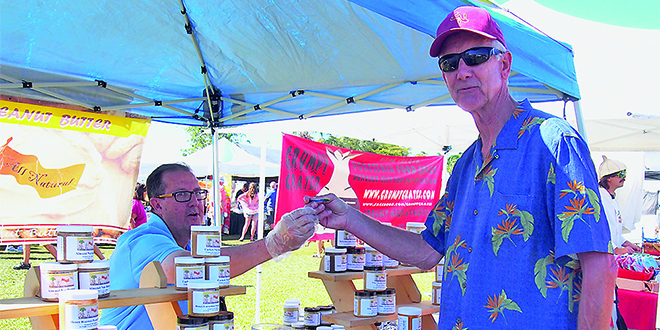 Photos by Maria Lamb | Brian Johnson from Minnesota tried a sample of Coconut Cream Peanut Butter but settled on Hot Buffalo as a gift.

Kat’s Southern Twang B-B-Q & Grilling Sauces
Kat Green of Kat’s Southern Twang B-B-Q & Grilling Sauces “has always been creative.” Even as a kid she could “look at something and would come up with something magical.” Her assorted jams and sauces are her current magical creations. This is Kat’s third season at the Marco Island Farmers Market and she can’t make her Bacon Jam fast enough. The jam is made with bacon, onions, garlic, brown sugar and a splash of bourbon. It goes well with burgers, grilled cheese sandwiches, or even added to breakfast items such as pancakes and French toast.

Kat’s Magic Spread is made with artichokes, sundried tomatoes, roasted red peppers, garlic, spinach and green olives. This is an all-purpose spread, which pairs well with chicken, stuffed mushrooms, omelets, dips or simply eaten with a slice of fresh, crusty bread.

Sassy Sauce is a true southern barbecue sauce, and Kat’s granddaughter Kaylee loves it on everything. Sassy Sauce works well as a basting sauce for grilled pork, chicken, ribs or burgers. Each week Kat offers samplings of her jams and sauces and would like her customers to know that she uses only the best ingredients and adds no preservatives. Kat’s jams and sauces are also available at the Marco Island Florist.

This is Paradise Peanut Butter’s first season at the Marco Island Farmers Market.

Rich Harmon and his wife wanted to make a peanut butter that is “out of this world.” According to Rich, “the peanut butter has to be better than what you can get at the store,” and he is not satisfied until he gets “that look and comments of OMG, that’s incredible.” His focus is on natural ingredients. The almond butter, cashew butter and creamy and chunky peanut butters are totally natural – nothing but nuts. He does use palm leaf oil in the flavored butters as it is healthier, and it comes from sustainable farms. Rich is concerned with rainforest destruction.

Rich’s best-selling flavor is Coconut Cream Peanut Butter, followed by White Chocolate Raspberry and Dark Chocolate. According to Rich, “People that like spicy things are mad over Hot Buffalo.” Marco Island is his first market of the week, so every flavor was made the day before. His favorites are flavors that resemble his own childhood candies, such as Dark Chocolate, Bavarian Cream and Honey Cinnamon. Only natural ingredients are used in all the butters, down to using sea salt in the flavored butters.

Bark Street Dog Bakery’s tent offers a smorgasbord of yummy treats for your favorite canine. Wayne Matonak has been coming to Marco Island for the past eight years. Canines bring their humans over for a quick browse hoping to go home with “Peanut Mutter,” Wayne’s best selling treat. Other popular treats are the Chix and Joy Sticks, which are yard-long chewable sticks, flavored with chicken or beef, and grain-free alphabet cookies. Wayne also offers Elk and Bison Bites, natural treats for both doggies and kitties.