Back Again in our own Backyard 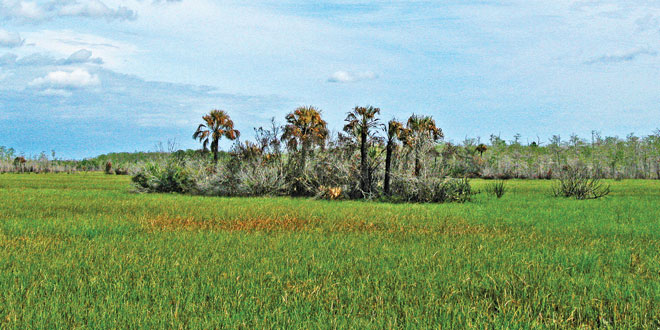 The unique ecology that is Fakahatchee Strand Preserve State Park is located about 45 minutes from Marco Island. It is a linear swamp forest of about 80,000 acres, which translates to approximately 20 miles long and 5 miles wide. Although it is a part of the state park system, it is actually a state nature preserve and thus, more highly preserved and regulated than a park. It is the largest state park in Florida; larger than the next three combined Loosely defined, a strand means a moving body of water. Fakahatchee is truly Florida wilderness.

In 1913, the area was purchased by Lee Tidewater Cypress Company for logging which commenced in the 1940’s when the wood was used in mine sweepers, PT boats and on the decks of aircraft carriers. During the late 40’s as much as one million cubic feet of cypress a week was taken from this area, virtually stripping the southern portion. By the late 50s, logging was exhausted and there was interest by the Gulf- American Land Company in developing the area as a southern extension of Golden Gate Estates; some people purchased property and they or their families still own lots or private dwellings within the preserve.

In 1972, as part of the settlement regarding illegal dredge and fill by Gulf-American in Cape Coral, some land 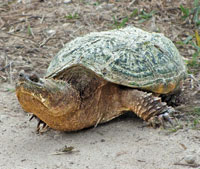 Snapping turtles can live as long as 100 years!

was acquired by the state. In 1974, under the Environmentally Endangered Lands Act, about one-third of the present preserve land area was purchased by the state. Further acquisitions continue and are still ongoing. Fakahatchee Strand became a state park in 2000. In addition to the clear cut logging of its earlier days, there were also farms in the area and some grapefruit and orange trees remain within the park.

The ongoing Comprehensive Everglades Restoration Plan (CERP) is important for the survival of Fakahatchee. The Prairie Canal that was dredged in the early 60’s to drain the area for development has damaged this fragile area; by backfilling this canal, CERP will help restore the natural flow of water to the preserve.

The park is staffed with three full-time rangers and a core of passionate, knowledgeable and hard working volunteers. The Friends of Fakahatchee is a very active citizen support group that assists with maintenance, funding and education. They man a new visitor center as well as host a variety of events. The small center is chock full of interesting models and information about the area. I was fascinated by the replica of the cigar orchid. This orchid, once found in Fakahatchee, has been poached to extinction in the area. However, in an agreement with Cuba, that country has supplied Fakahatchee with seeds 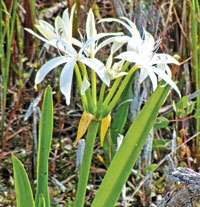 Swamp lilies bloom in the Strand.

and reseeding is occurring.

On a trial basis, the Friends are running ghost tram tours of the Strand; the tours are named after the elusive ghost orchid which blooms within the park. The two and a half hours tour provides an alternative to putting on boots and sloshing through the muck on one of their guided swamp tours. It is their hope that these tours will continue on a regular basis beginning in November.

On the tour, we examined a variety of habitats, including prairies, swamps, and hardwood hammocks. Most of the area is made up of limestone. Not like the limestone found up north, this is calcium carbonate, made from shells and very porous. There are good examples of just how porous it is (and why we are so subject to sinkholes in Florida) near the visitor center. Our guide shared with us a somewhat fossilized sand dollar encased in limestone that was recently found, indicating that this area was once under water. Although we did not visit the southern part of the park, it consists of an estuary.

Among the fauna we saw were deer, a raccoon, snakes, a snapping turtle, butterflies and a variety of birds including hawks; a previous tram tour had encountered a bear. Our guide noted that seeing deer means that the area can sustain a 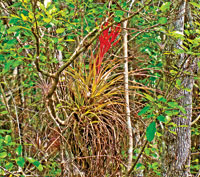 The cardinal airplant adds a splotch of color among the foliage.

While on the tram, we also happened on some students conducting an experiment. They are trapping and radioing marsh rabbits; their theory is that if a python eats a radioed rabbit, they will be able to track down the python. To date, one such rabbit has been ingested, but the python spit out the radio. In the southern section, there are crocodiles and manatees.

The flora in Fakahatchee is distinctive. It is home to between 7,000 and 10,000 royal palms – the largest number in the United States – as well as the largest concentration and variety of orchids in North America. This is the only place in our country where you can see a mixture of royal palms and mixed hardwoods, especially bald cypress. It is on the pop ash trees where ghost orchids can be found – usually in July.

The bald cypress provide a canopy that makes the Fakahatchee ideal for orchids and there are at least 44 native ones that have been located. There are also 14 native bromeliads throughout the area. On our trip, in addition to the various trees, we saw duck potato flowers, swamp lilies, numerous epiphytes including the brightly hued cardinal air plant, the seed pod of a wild coco orchid, an African 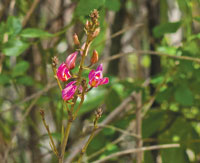 Pine pink orchid, one of 44 species found in Fakahatchee.

spotted orchid, and a pine pink orchid in bloom. There also is an abundance of poison ivy here!

There are a number of hiking trails in the Fakahatchee; I’m told a good one is about six and a half miles past the visitor center, through Gate 12. East and West Main Tram trails, so named because they were built to haul the cypress logs, are also good hikes. There is a canoe and kayak launch at East River, south of US-41. In addition to the aforementioned swamp walks offered by Friends of Fakahatchee, there are also guided canoe trips. Their website is www.friendsoffakahatchee.org.

Incidentally, a big “thank you” to Jo-Ann Sanborn, Marco’s resident Everglades artist for letting me know about this tour; Jo-Ann’s studio gallery is located at the Esplanade and her daily blog (www.joannsanborndaily.com) is often full of information about her beloved Everglades.