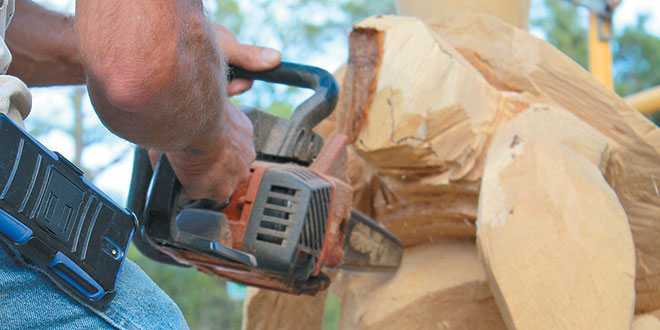 Baby dolphins come into this world tail first and swimming. Just moments after birth, the mother dolphin will gently nudge the newborn up to the surface so that it can take its first breath of fresh air. This image was the inspiration behind artist Michael Von Schroth’s latest wood sculpture, “Baby’s First Breath.”

Von Schroth has been working with wood as a medium for over 26 years. You may have seen him. For the past 20 years he has set up shop next to the Gators’ Crossroads bar, just past the intersection of US 41 and San Marco Road. In season he can be found sculpting away, equipped with his handy chainsaw and earmuffs. Von Schroth, along with his two sons Christopher and Luke, all take part in 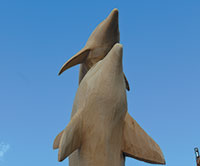 At the very top of the sculpture sits the dolphin calf, its nose pointed to the sky.

woodwork. His son Christopher even competes in national competitions. “My son grew up around it. He’s really good. A lot better than me at some things,” said Von Schroth with a laugh. His other son Luke does finishing work.

“Baby’s First Breath” was made out of a massive piece of cypress wood. The wood costs upwards of a couple thousand dollars. “I go to a mill up north and I buy,” said Von Schroth. “When I buy wood, I cut it and look at it. I make sure it’s the kind of quality that I want.” The draw of cypress wood is that it can be put outside. There’s no fear of rot and it can essentially stand the test of time.

Walking up to his studio the air was filled 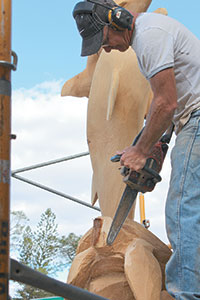 Von Schroth used a raised platform to sculpt the massive piece of wood.

with tiny particles of wood that slowly drifted to the ground like snow. It smelt like a log cabin and summer time. Von Schroth carved expertly. Sawing off a little piece here, gently shaving off a piece there. It was as if the cypress was speaking to him. With each stroke of his chainsaw he could see more and more of the marine life coming through. Turtles swam under the dolphins and at the very top was the calf, its nose pointed towards the sky.

Von Schroth says that when he started with the concept of “Baby’s First Breath” he had a completely different image in mind. But as he worked certain things popped out of the 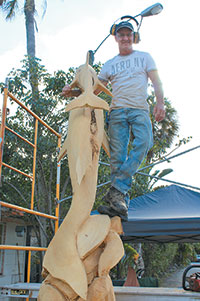 wood and he just went with it. “That’s nothing what I had in mind,” said Von Schroth. “In my head it was supposed to be different. The concept’s there, but it’s not exact.”

It’s interesting that traditionally, chainsaws evoke feelings of ruggedness, or maybe even a sort of meanness. Yet with this rough medium he uses, he creates something so tender and beautiful, and out of the wood comes art.

As for the future, Von Schroth plans on leaving his mark in Naples and Marco Island. He’s been speaking to the Marco Island Center for the Arts and has a few ideas up his sleeve. “Donating to Naples and Marco is basically me saying I’d like to leave something for what I’ve done here. Everyone knows me and I want to leave something,” said Von Schroth.