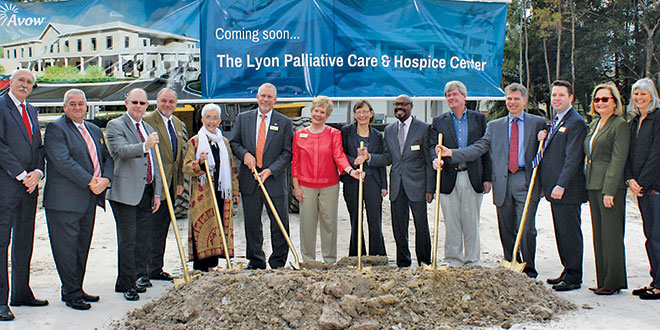 Avow’s newest building will serve as the new home for its palliative care and hospice clinical teams plus community bereavement. It will be located adjacent to the Ispiri Community Center on the southeast side of the campus.

Construction on the two-story, 24,000 square foot building will begin this month with expected completion targeted for November 2016. The building was designed by Phil Krieg, AIA, principal at Burt Hill/Pollock Krieg Architects. Construction will be facilitated by DeAngelis Diamond Construction.

The new facility will 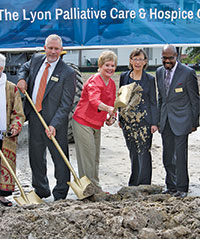 Thelma Lyon (center) joyfully tosses dirt to launch the construction of Avow’s newest facility on the Avow campus in Naples.

be the fourth building added to Avow’s fifteen-acre campus. The E & L Smith Administration Center was built in 1992. The Frances Georgeson Hospice House Inpatient Unit was built in 2003; the Ispiri Community Center was added in 2010.

The interdisciplinary facility will be built with ongoing community support garnered through the Promise 2 Give Campaign for Avow which, in addition to constructing the new facility, is dedicated to grow palliative care programs for adults and children and sustain hospice services at Avow.

According to Avow President & CEO Jaysen Roa, “Construction of The Lyon Palliative Care and Hospice Center is made possible thanks to the generosity of Thelma Lyon. Thelma has been engaged in the national conversation about palliative care for a number of years and she is extremely passionate about advancing this new kind of care in our local community. Thelma was also instrumental in helping us secure our guest speakers, Doctors Meier and Morrison.”