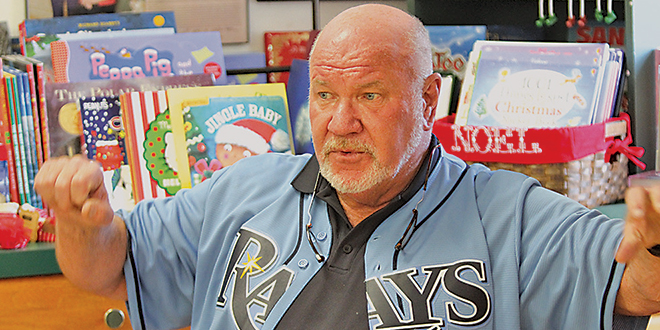 Randy Wayne White’s famous Doc Ford series has catapulted him to the top of the New York Times bestseller list on numerous occasions. But Randy Wayne White didn’t hesitate to give credit where credit is due when addressing a standing room only crowd at Sunshine Booksellers on Friday, October 21st.

“I couldn’t give away my early books,” White told an audience filled with some of his most loyal fans. “There were times I tried, but people wouldn’t take ‘em.”

White said it was local, independent bookstores like Sunshine Booksellers that put him on the map, and kept him in business in the early days.

White had literally stepped off a plane in Fort Myers an hour earlier and drove directly to Marco Island after returning from a book signing in Chicago.

There are 24 books in his highly popular Doc Ford series. Many in the audience had read them all. In recent years, White has started another series, the Hannah Smith novels, that focus on a character from an early Doc Ford classic, “Captiva.” White was introducing his newest Hannah Smith novel “Seduced,” released Tuesday, to the Marco gathering. “Seduced” is the fourth novel in the Hannah Smith series.

White has been on a break-neck pace in recent years, publishing two novels a year. It’s a pace that he admits may not be healthy for him to maintain.

“I write seven days a week with rare, rare exception. I need to start taking vacations, I really do. I need to start working out more. So this will be the last year I write two books in a year. It’s been four years in a row. That’s enough. I need to start paddle surfing and having fun.”

“In ‘Seduced,’ about a year ago, in the citrus industry, friends of mine were telling me about this blight that has all but destroyed the Florida citrus industry. It is a disease that is spread by flies.I remarked about how when the Spaniards landed in Florida they planted citrus trees, so that on return voyages they could harvest citrus and have something to eat.”

White discovered many of these trees while working as a fishing guide. “They were growing on remote islands.”

“I mentioned, ‘Did you try reverting to the original root stock?’ They said, ‘awe that would be too simple, it would never work.’ There begat my interest in Florida citrus.”

“If a Florida citrus tree grows in an area that it is so remote that it cannot be cross-pollenated with another citrus tree, the fruit it drops contains seeds that are the exact DNA replica of the original tree. My theory was that if we could find trees so remote that they may well date back to the original seed stock. They may be exact duplicates of trees that began 400-500 years ago. So we went looking for these trees. And we found three archaic Spanish citrus trees. We know that because we’ve done the preliminary DNA work.

“So in the book “Seduced,” Hannah Smith is presented with the same problem, and she remarks to Doc Ford, this linear, not very funny, not very likable marine biologist, that here citrus seeds are dying. Ford said, ‘Go back to your groves, determine which trees don’t have it, and find out why they are immune.’ So Hannah comes up with my idea. And she goes looking for the original citrus trees. So all of that stuff in “Seduced” is real.”

Marco Island is often mentioned in White’s books. In fact “Ten Thousand Islands” was set on the island.

“Much of ‘Ten Thousand Islands’ was set on Marco,” White said. “It was based on a true story about a gold medallion. The Spaniards came in 1500, the Jesuit priests described the king of the Calusa’s as wearing a gold medallion of strange design on his forehead. A child, while digging in a Calusa burial ground, found the king’s burial spot. Within a month or two of this discovery, the child was found hanging by the neck. A month or two later the girl’s bereaved mother was contacted by a gentleman from Lehigh Acres. The shyster got the woman to give him the medallion. A number of years later I got the medallion from the shyster. I owned it for 22 years, then I donated it to the Florida Museum of Natural History in the child’s name. This is all true. So I have already written about Marco.”

A woman in the audience summed up the desire of him Marco followers when she shouted, “We’re ready for another one.”