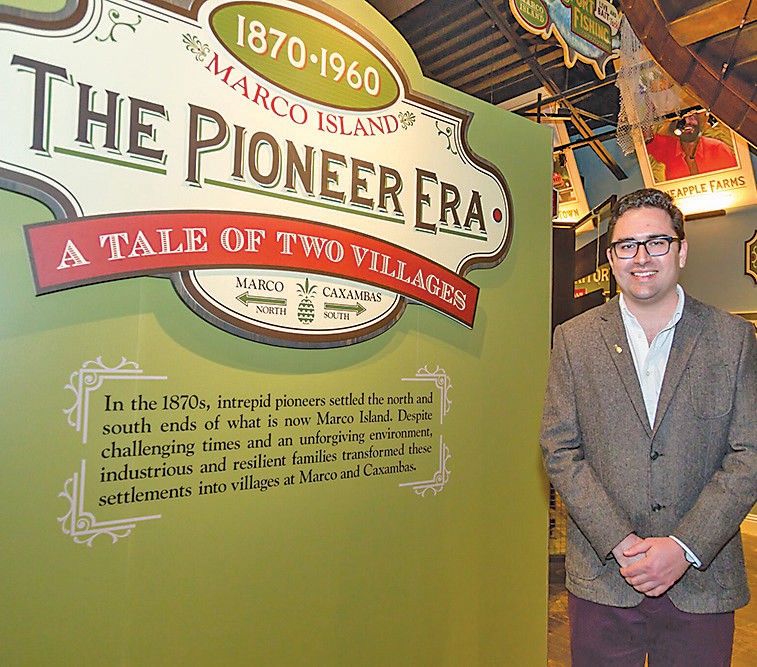 Austin Bell in front of the MIHS Pioneer Exhibit, which he curated. Submitted Photo

Since the spring of 2014, the Marco Island Foundation for the Arts, a 501(c) (3) non-profit organization, has been naming an Artist of the Year. This special honor recognizes the art or activity of a person or group who has made an outstanding contribution to the cultural life of our community. Ten nominations were received by the deadline, March 31st, which were greatly appreciated. These were individuals or groups who are all wonderful artists, well known for their contributions to the arts and the culture of Marco Island. However, in the end, only one had to be chosen.

Inside the museum, Austin curated three permanent exhibit galleries which tell about the people who lived on Marco Island for thousands of years, the early pioneers, and the Mackle Brothers who brought us the modern Marco Island that we know today. A variety of mediums ranging from immersion to interpretative panels to compelling artwork to innovative technology were used in these displays. Since the first Calusa exhibit opened in November 2014, the community has seen the steady development of these exhibits bringing an estimated 50,000 visitors to the Marco Island Historical Museum since 2014.

Austin was nominated for Artist of the Year by Pat Rutledge, Executive Director of the Marco Island Historical Society. She said, “My nominee is not a painter, a sculptor nor a photographer, but someone who has made an outstanding contribution to the cultural life of Marco Island in a different way.”

Recent popular temporary public outreach exhibits such as the Marco Island 50th Anniversary Celebration in 2015 and the Island Country Club 50th Anniversary Celebration in 2016 were created by Austin. He also oversees the management, development, and care of the MIHS collections and recently received a grant from the National Endowment for the Humanities to preserve archeological materials from Marco Island for generations to come.

And to top that all off, Austin is the author of “Marco Island” (2017), a book in the popular Image of America series by Arcadia Publishing. The expected publication date is November/December 2017.

Austin will be honored as the 2017 Artist of the Year by the Marco Island Foundation for the Arts on Saturday, June 3rd at 11:30 AM during the annual Scholarship/Artist of the Year Luncheon at the Fellowship Hall, Wesley United Methodist Church, 350 S. Barfield Drive, Marco Island. The community is invited to attend. Call 239-389-0280 for more information or reservations.