Attention Southwest Florida Shoppers: Save Money, Live Better … and be in a Music Video?! 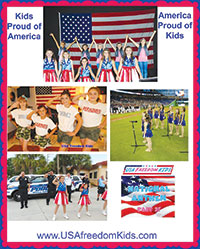 The USA Freedom Kids are in production on a music video for their fun and upbeat dance song, “National Anthem Part 2.” The Kids will be shooting a scene at the Walmart Supercenter located near Marco Island on Monday, October 19.

The Kids have already recorded several scenes, including one of their favorites with the Marco Island Police and Fire Rescue personnel. “It quickly became way more than a great scene for the video,” says Jeff Popick, the group’s founder and manager, “it was a party; and a truly terrific experience for everyone.”

“National Anthem Part 2” is now available on iTunes, Amazon.com and many other sites. The song is described as a high-energy dance song that combines elements of the “Star Spangled Banner” to help inspire and grow freedom and American patriotism.

The song is, of course, patriotic, but it also breaks new ground with its electronic dance musicality. EDM, as it is known in the music industry, has become a favorite style of music. In the case of the “National Anthem Part 2,” this creates something very special and unique – appealing to young and old alike. Our veterans absolutely adore these girls and the patriotic music. Our younger generation loves the fun music, while learning the importance and 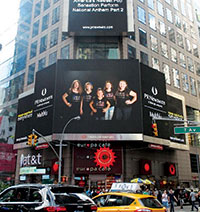 The music video is choreographed by Tre Preston, who some refer to as the “King of Choreography.” Tre has been instrumental in creating dance routines for many A-list performers, and he has even served as the creative director for the best-selling pop group, Kidz Bop.

The USA Freedom Kids perform patriotic music that truly melt hearts, lift spirits and inspire a renewed appreciation of American freedoms. In addition to the single, they have a full album, which is scheduled to be released in early 2016. Bob Galloway, Walmart store manager says, “The USA Freedom Kids represent the best of America’s future. It is terrific to see kids who are proud of America. And, America is so proud of them.”

The USA Freedom Kids is a local group, based on Marco Island, but they’ve already made their way into New York’s Times Square when their first single, “National Anthem Part 2,” was launched. Popick reports that he is speaking with representatives from the campaigns of numerous presidential candidates about the Kids performing for them, but has declined to comment on which candidates. “Time will tell,” he says.

Come celebrate freedom with the USA Freedom Kids! For more information, please visit www.USAfreedomKids.com. If you’d like to be in the video, you are encouraged to send an email to info@usafreedomkids.com for more details.