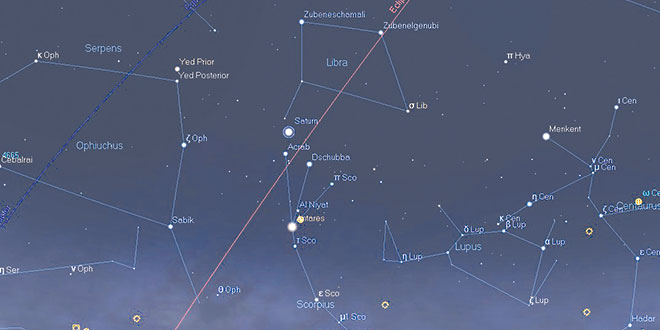 Looking Southeast, 11:00PM May 29. Saturn is well up in the sky while the glorious summer Milky Way is beginning to rise. SUBMITTED PHOTO

I was lent a small book by a good friend recently; this book was written to introduce a novice to Astronomy. What makes this particular book worthy of note is that it was published in 1903. Its original title is Astronomy for Women by Camille Flammarion written in French; the edition I have is an English translation, re-titled Astronomy for Amateurs.

It reads very much as a modern introductory book with a couple of notable exceptions; first, the language is more ornate and “flowery” than is typical today and gives the book a rather quaint feel, the second exception we’ll get to in a moment.

For the stargazing portion of the book, not much has changed in the past 112 years. The constellations are drawn about the same way; the directions for finding various constellations are very similar to what you read in this column today. The brightest stars’ magnitudes are carefully listed, and the distances to the closest are correctly given. In the portion on the Solar System all the planets’ sizes, distances and various satellites are listed. Interestingly, all of the major satellites had been discovered by then, and not a few of the smaller ones were known. The author correctly gave the exact date for the next transit of Venus, then more than a century away!

Naturally, without the benefit of modern equipment and the space program, a lot of the details are just plain wrong. Mars was thought to have a much warmer climate, for example, and comets supposedly consisted of nothing but gas. Which brings us to the second exception.

In modern books, a brief mention is always made about stuff that is not known or well understood. However, in this book, not a word was written about major controversies that were rippling through Astronomy at that time. The author simply ignored them. Why do the stars keep shining for eons? Astronomers in 1903 had no clue and were desperate to find out. (They are naturally occurring nuclear reactors.) Why was Mercury not following it’s predicted orbit? That question had been bothering Astronomers for more than half a century. (General Relativity provided the answer.) What exactly were those so called spiral nebula? (We call them galaxies today.)

The book was written just as a major revolution of scientific thought was getting underway. All of the above questions would be answered within 20 years, meanwhile raising brand new questions that still bedevil us today. Such is progress!

After a winter without planets, we have a summer loaded with them. Jupiter, Venus and part of the time, Mercury are visible this month in the west, while Saturn reaches opposition on May 22. This means Saturn rises as the Sun sets and thus is visible all night long.