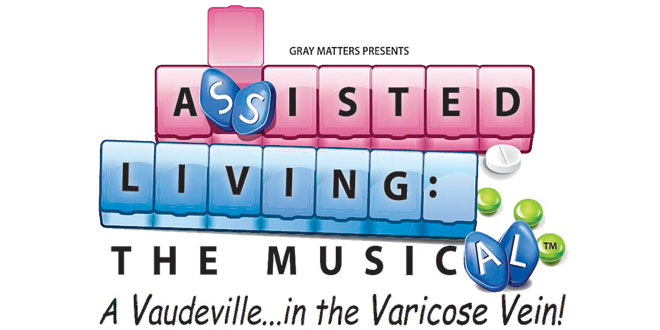 Assisted Living: The Musical® comes to Marco Island when it is performed by its authors Compton & Bennett at Rose History Auditorium. It runs Friday, Saturday, February 8 and 9 at 7:30, and Sunday, February 10 in a 2:30 matinee show.

The show, billed as “A Vaudeville…in the Varicose Vein,” delivers laughs from the opening scene in which a newly-departed couple is greeted in the afterlife not by Elvis, but by Tiny Tim.

The show romps through the “best years of their lives” at Pelican Roost, an active senior living community oozing with characters who have unique answers to later-life’s questions.

“It’s like a cruise,” explains Pelican Roost resident Naomi Lipshitz-Yamamoto-Murphy, “except the final destination is not The Bahamas.” She is one of 18-characters played by the two actors.

Assisted Living: The Musical opened in Naples in 2009 and immediately drew the attention of national and international press. It enjoyed AP coverage in more than 180 newspapers, and on the radio 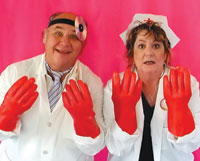 including the BBC and ABC World Radio News. The San Francisco Examiner calls it “Wickedly funny.” The San Jose Mercury News warns, “You’ll die if you miss this one.” Its hometown Naples Daily News says, “Hilarious.”

Audiences have expressed all manner of reaction to the show. One little old lady literally fell off her chair laughing and had to be helped up by two strong staffers. Another woman left the show in the middle, and then returned with a spare oxygen tank for her husband who was “laughing too much.” One Gen-Y’er said of his first peek into old age, “Sex? Drugs? No work? I’m in!”

Assisted Living: The Musical is performed by its authors Rick Compton and Betsy Bennett on Friday and Saturday, February 8 and 9, and in a 2:30 matinee on Sunday, the tenth.

Tickets and information are at www.ComptonAndBennett.com, or by calling 800-838-3006. Rose History Auditorium is located at 180 South Heathwood Drive on the Marco Island Historical Museum campus.