Ask Me About the Birds! 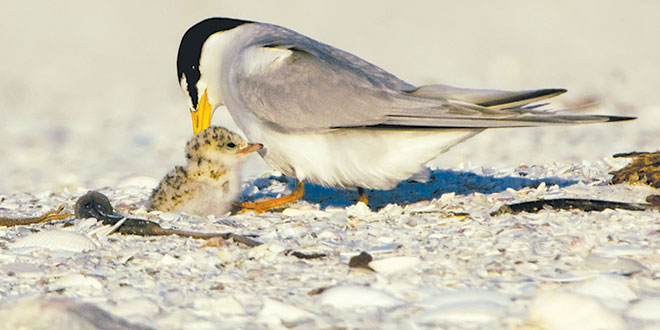 A moment between a shorebird and her chick on the beach.

Florida’s white sand beaches are a playground for millions of residents and visitors each year. Beaches also serve as important habitat for shorebirds, with many species laying their eggs and raising their young right on the sand. Beaches in and around Rookery Bay National Estuarine Research Reserve historically have hosted some of the largest beach-nesting seabird colonies in the state.

Audubon Florida and Audubon of the Western Everglades recently partnered with Rookery Bay Reserve to hire Adam DiNuovo in a new position as Shorebird Monitoring and Stewardship Project Manager.

DiNuovo is working with research and stewardship staff at the reserve to monitor seasonal beach-nesting bird colonies, over-wintering shorebird population trends, spring/fall migratory periods and habitat on mainland beaches, as well as on remote, offshore islands. He is also recruiting and training bird stewards as part of a wider education and outreach

initiative within Collier and Lee counties.

A native of Palmer, Massachusetts, DiNuovo received his bachelor’s degree in Conservation Biology from Franklin Pierce University. Before taking this position in April, he was Research Coordinator at the San Diego Zoo Institute for Conservation Research, managing field crews studying the California Least Tern and Western Snowy Plover at Camp Pendleton. He was previously part of the Audubon family, having worked for three years as Assistant Sanctuary Manager at the seven seabird islands that form Audubon’s Project Puffin focal islands in the Gulf of Maine. Before Project Puffin, DiNuovo worked with American oyster catchers in South Carolina, Delaware and Virginia; piping plovers in Mississippi and Massachusetts; and common and roseate tern colonies in Massachusetts.

“The fact that South Florida’s climate provides habitat for birds year-round, and the emphasis on field work focused on species with which I 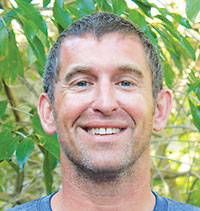 am familiar, made this job very attractive to me,” said DiNuovo. “Also, this is such an important region for wintering and migrating shorebirds that the opportunity to educate others about the perils faced by nesting and migratory birds was a calling.”

DiNuovo’s efforts have already paid off. While on his monitoring route recently he spotted some crows that were fixated on something moving in the vegetation. He looked through his spotting scope and saw a tiny Wilson’s plover chick struggling. Knowing that crows are natural predators of baby birds, he took off running.

“I have never covered 40 yards faster in my life,” said DiNuovo.

He rescued the little fluffball, snapped a quick photo and then released the bird to the safety of its parents.

“Keen observation skills are a requirement for Audubon biologists who work with well-camouflaged beach-nesting birds on a daily basis,” said

During the monthly survey, Adam DiNuovo and Rookery Bay Reserve bird stewards spotted this snowy plover and chick near the north end of Keewaydin Island. This is the first official nest spotted in Collier County since 2005.

Dr. Marianne Korosy, Audubon Florida’s Important Bird Area Coordinator. “In this case, the crows’ behavior signaled Adam to look a bit more closely. He was able to save the life of a tiny chick that has a chance to become one in the next generation of Wilson’s plovers nesting on this beautiful island.”

Snowy and Wilson’s plovers are solitary nesters and their nests can be found on the beach above the high tide line or in open sandy areas with sparse vegetation. Least terns nest together in colonies consisting of several pairs or hundreds of individuals.

The eggs and chicks of beach-nesting birds are especially vulnerable to human disturbance. From early March to late August, least terns and Wilson’s plovers nest on Keewaydin Island and other area beaches. Nests are made in shallow depressions or “scrapes” on bare sand. Eggs and young are 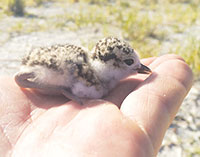 This Wilson’s plover chick was entangled in vegetation and would have become a meal for crowsif DiNuovo did not spring into action.

so well camouflaged they can be unintentionally stepped on by beachgoers. In addition, adult birds will quickly abandon their nests when disturbed by people or dogs.

Audubon engages citizens in shorebird monitoring programs around the country, and volunteers are needed to help monitor beaches within the Reserve and surrounding area.

“The only way for these conservation efforts to succeed is through community awareness,” says DiNuovo. “Most people are simply unaware of the importance of this habitat and the little things they can do to help while visiting these beaches.”