Ask Me About the Birds 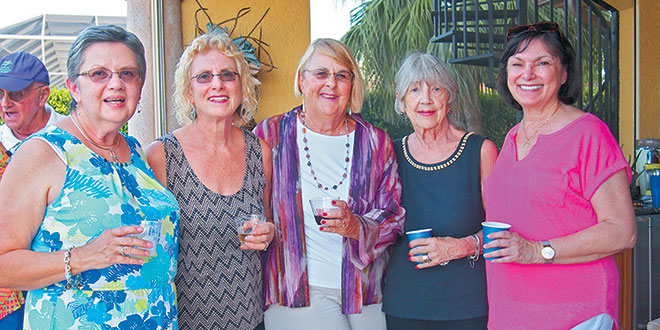 Calusa Garden Club members are fascinated with birds of all kinds. So it was no surprise when club member Sandy Wallen hosted a late afternoon bird watching event at her newly built home overlooking the ABC Islands. Members arrived with high-powered viewing scopes and cameras, ready to take photos of the colonies of birds hovering over the three mangrove islands.

Did you know that the waters surrounding the ABC Islands (just south of the Jolley Bridge) are closed to public access? According to the Florida Fish and

Wildlife Conservation Commission (FWC), this buffer protects the nesting and roosting birds. The islands are also declared a Critical Wildlife Area, and serve as a bird rookery for protected or threatened species.

Donna Kay gave a running narration of “the colony of magnificent frigatebirds weighing down the mangrove branches.” Marianne Foley described the evening as a “birdfest,” and praised Sandy Wallen “for arranging an eagle to perch majestically for everyone to admire.”

The was a very special discovery by

Charlette Roman made the very special discovery of eagles on

Island A. Charlette, wearing a green shirt that read, “Ask Me About the Birds,” answered all the questions members and guests had about the birds.

Birds are about feathers, flight and song, and there was an abundance of all three this evening. Members were awed by the agile frigatebirds, with glossy black feathers and deeply forked tail, soaring, circling and gliding, and from this distance we could hear the faint mish mash of bird sounds.

It was a “grand finale” event, as club members wished their “snowbird” colleagues a safe travel home.