Art in all Forms Cars as Art 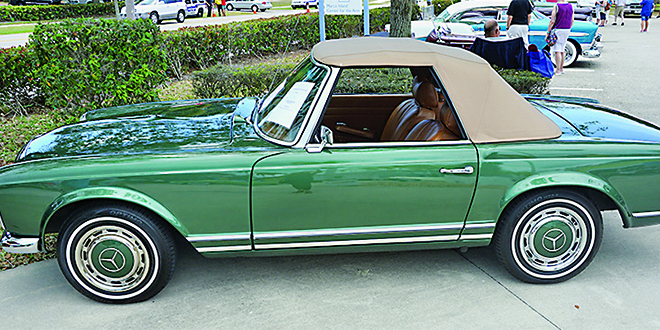 Photos by Jessica Hernstadt | This pristine Mercedes 280 SL convertible (1971) was generously donated by Bill Young to be auctioned off following the show, to benefit Marco Island Academy.

The Art Center’s eclectic and informal setting on Winterberry Street hosted the 4th Annual “Cars as Art” event featuring pre-1977 unmodified antique and classic automobiles. The sponsors and chair people for this annual fundraiser were Jack and Claire Keery, and Keith Pershing at Island Automotive.

Over 1,000 people dipped themselves into sunscreen and drank fluids to brave the sun and find that there was something of interest for anyone with the slightest interest in cars.

Each of the 45 automobiles was evaluated by qualified art professionals, photographer Clark Lindberg and artist Mary Kane Zemel. They had a difficult choice to make for not only did the cars have perfect period details, were stunningly beautiful, but any number of them were deserving of an entire article, not just a trophy.

In the best cars the total entity is art itself. This they found in a 1933 Auburn Phaeton owned by Sal Campo, the winner of the Judges Choice award.  The next set of awards was three People’s Choice awards. The steady stream of visitors throughout the six-hour event determined these winners. It was clear to many that these automobiles were designed with someone’s passion and creativity. Many of the cars were a complete masterpiece unto itself in every aspect of visual design and sculpture.

The “Cars as Art” fundraising event has become like bright headlights traveling down Collier Boulevard on Marco Island. It shines a light on a different type of art. We may have forgotten that “artful automobiles are all about the symbiosis of man and machine, and not (just) about basic transportation,” Co-chairperson Jack Keery stated,  “We were very pleased with the attendance, the cars were amazing, the event was a success, and people left with a smile on their face.”

Marco Island Center for the Arts is a non-profit 501(c)(3) Arts organization established in 1978. Its mission is “Promoting Education & Appreciation of the Arts on Marco Island.” For more information on the Art Center’s many classes, programs and events go to marcoislandart.org or call 239-394-4221.