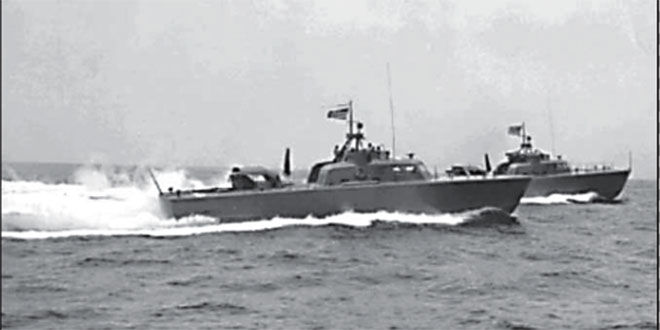 Two crash boats on a rescue mission in the Pacific.

Art Calvert has done just about everything during his lifetime. Fishing is what brought him to Goodland. Fame and fortune is what brought his Irish ancestors to America. Beverly Boggs, one of Calvert’s daughters, has a trove of Calvert memorabilia and shared the Calvert family history with me. The Calverts first appeared here in 1629, after King Charles I granted Sir George Calvert the proprietorship of a large tract of land, north of Virginia’s James River. Calvert, also known as the First Baron of Baltimore (West County Cork, Ireland), and his son Cecil, the Second Baron, are celebrated for founding the State of Maryland. Its largest city is named for them. If you are inclined to drink a toast to the Maryland Calverts, you can do so with a swig of Calvert Extra, an 80 proof rye whiskey, until recently, distilled in Baltimore. In 1840, Art’s branch of the family settled in southwest Indiana, where still another community, Calvertville, was given the family name. It was in this rural unincorporated town that Robert Arthur Calvert was born in 1913. His first one room school, 3 miles from his farm, was reached on foot or by horseback. It had from one to three students per grade. In 1931, Art graduated from Arsenal Tech, (6,000 students) in Indianapolis, where he edited the school paper. In 1934, he joined the Indiana National Guard and learned to fly in a fabric (linen and cottonseed oil) 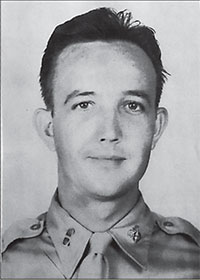 covered Stearman PT-17 trainer biplane, taking off from cow paths and unpaved roads at nearby Camp Knox, Kentucky. This plane was to perform yeoman reconnaissance service in WWII and later as a crop duster and stunt plane after the war. Some are still in service today.

Tiring of the cold in Indianapolis, where he was editor of a small paper, Art got a ride to Florida and ended up with an aunt and uncle in Tampa. He organized a harmonica band, which regularly broadcast (WDAE) from the Tampa Terrace Hotel. Art played the harmonica and bass fiddle, which he made from a wash tub. After the hotel closed, Art attended the University of Florida, spending his summers working in Atlantic City as a bellhop, lifeguard, chef and vaudeville performer, probably at the Steel Pier. In Atlantic City, he became smitten with another summer worker, Dorothy Walbert, from Maryland’s Eastern Shore. After college, Dottie moved to Miami looking for work. Art followed and the two were married in 1936. They opened a barbeque stand with Art doing the cooking and Dottie delivering the food to cars on roller skates. When Dottie became pregnant, they closed the barbecue and Art partnered in the founding of Standard Supply and Electric Co. He also became proficient in navigation at the Pan Am School of Navigation. These efforts were later to land him a birth in the recently renamed Army Air Forces (AAF) and the captaincy of an AAF army 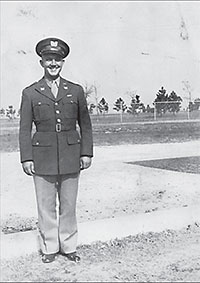 war ship in the Pacific. After WWII broke out, Art likely felt that as a pilot, trained in navigation, he could wrangle an appointment with the AAF and fly combat missions in the war. He was half right.

On August 23, 1943, Art received a telegram appointing him not as a pilot, but as a Warrant Officer JG (rated Third Mate) in the Maritime Section of the U.S. Army, assigned to a QM (Quartermaster) Rescue Boat. He was ordered to report to the Paren Army Air Base in New Orleans, at his own expense. The telegram was signed by General Arnold, Commanding, Army Air Forces. Prior to this time, the Navy had the primary responsibility for rescuing its downed pilots in the Pacific. By 1943 however AAF planes were taking off from Army administered land based aerodromes for bombing runs on enemy installations. The AAF wanted the responsibility and assets for recovery of its own pilots. They did not want to depend on others – especially the Navy. (The AAF was not designated as a separate branch (USAF) until 1947.) In response to this, the AAF developed the ASR (Air Sea Rescue) 85, almost immediately dubbed the “crash boat.” During 1944 and 1945, over 140 of these 85-foot boats were delivered to the South Pacific. They carried a crew of 14, and were built of double hulled Honduras Mahogany, with plywood used in the interior. They were armed with two double 50 caliber machine gun 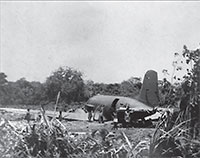 This Army Douglas DC-3 managed a crash landing in the Philippines in the fall of 1944. Warrant Officer Calvert and his crew were sent in to rescue the crew. Pictured: Natives stripping the plane after rescue.

mounts, and a 20 mm “pom pom” anti-aircraft gun mount. Their speed was roughly equal to the fabled PT boat and their range was about 500 miles. Art Calvert, now promoted to Master took command of one of these boats, the P-111, when he arrived at Guadalcanal in the early spring of 1944. Skipper Calvert, now promoted to Master, promptly named his boat The Prodigal Son, after the biblical character who always returned home after his sojourns. The boat lived up to its name. The military gave names to everything in those days. Thereafter, he and his crew fought in the South Pacific from Guadalcanal to the Philippines. In late 1944, Art’s luck finally ran out in the Philippines, when he contracted a particularly virulent form of Malaria. He was shipped back to the states in April 1945 and honorably discharged in June 1945.

The military censored every letter sent home by its soldiers and sailors. Art wrote twice a week. Many were preserved by the family. None detail any of his exploits there, but did offer reassurance that he was doing OK, and was thinking of his family. It is not known how many pilots he rescued or other acts of derring-do he and his crew pulled off, but one vignette survives. In the fall of 1944, while on patrol from his base on Cebu Island in the Philippines, Art was notified that a Japanese sub was in the area. He cut the engines 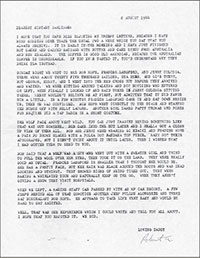 over an oil slick and launched some depth charges off the fantail. Because of the debris, which then floated to the top, Art believed that the submarine was hit. One of his earlier letters dated August 8, 1944, does detail a memorable event. It was apparently written from a base in the Russell Islands, 25 miles northwest of Guadalcanal. This was the day when Bob Hope and his troupe came to entertain the troops. According to Art, 25,000 sailors, sea bees, and GIs were assembled to hear him. It must have meant a lot to Art and to rest of the troops stationed there. One can picture Art pounding on his typewriter (all caps) to share this moment with his family back in the States. In the letter, he portrays Bob Hope, Frances Langford and Jerry Colonna as being weary and tired, but game and uplifting to the troops. “A wolf was a guy who went out with a sweater girl and tried to pull the wool over her eyes,” Hope told the homesick fighters – a knee slapper even today. Art was still laughing when he arrived in Goodland 10 years later.

In the next column – an upbeat Art Calvert arrives in Goodland and starts selling “Goodland Views.”