Are you smarter than a Stone Crab? 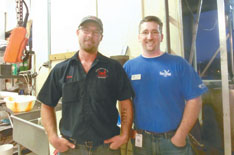 Fortunately, there wasn’t a quiz at the end of the “Are you smarter than a stone crab?” program. The educational program was fun, informative and tasty too, thanks to Rookery Bay, the local Sea Grant Extension agent-Bryan Fluech and Grimm’s Stone Crab Company. The program offered an in-depth look at the Stone Crab claw industry and its economic impact on the State of Florida. The program started off at the Rookery Bay National Estuarine Research Reserve and ended in Everglades City at the Grimm’s plant.

Bryan led a class of about 20 through a comprehensive look at stone crabs covering the biology of stone crabs: where do they live, how long do they live, what do they eat, when do they spawn, etc. The second portion focused on how the fishery works, the management of the stone crabs and the economical impact the industry has on the state of Florida. The third and final portion of the event was a field trip to Everglades City to Grimm’s to learn about the processing of the stone crabs.

Do you think it is legal to take BOTH claws of a stone crab? Most wonder how a crab would feed itself without claws. Overwhelmingly, the audience voted for a one claw rule. FALSE! Florida does allow a fisherman to take both claws. Only claws measuring a minimum of 2 ¾” are acceptable. If the claw is snapped off quickly and properly (not twisted or pulled) a diaphragm will seal the socket and it will not bleed out. Claws regenerate, however studies show only about 13% of stone crab claws harvested have been regenerated. An infield study conducted 10 years ago showed 75% of stone crabs will survive while missing one claw and 50% survive with both claws removed. Stone crabs are bottom feeders and are able to move and eat freely without claws.

Florida waters have 1.5 million crab traps. There are 72 commercial permits in Collier County alone. Monroe and Collier counties account for 52% of all stone crab landings 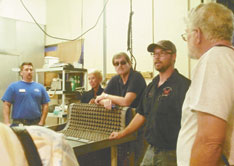 representing an average of 600,000 pounds of claws with a dockside value of $5.5 million. Fl-Seafood.com indicates Florida fishermen catch more than 83 percent of the nation’s supply of grouper, pompano, mullet, stone crab, pink shrimp, spiny lobsters, and Spanish mackerel. Of that, 100% of spiny lobster and 99% of stone crab come from Florida.

After absorbing all the data, everyone would agree the most delectable part of the program was the opportunity to sample stone crab claws. Of course, mustard sauce complemented the offering, and blue crab claws were available for those wishing to compare taste and texture. The class was warned never to ice raw crab claws. They must be cooked first, then iced. If frozen, thaw in the refrigerator, not under water.

Following the sampling of stone crab claws, the group headed to Everglades City to Grimm’s Stone Crab Claw Company. Justin Grimm met the group and explained, “the company is family owned and operated and you can find three generations at the plant on any given day. Grandmother, at 83 yrs. old, still comes in daily.” They have four employees and have been buying from the same boats since 1979. They only buy from these suppliers. This guarantees quality assurance.

The boats are individually owned and the crabbers operate as independent businesses. Of course, it is a highly regulated industry. “The second they hit the door we start to file the state trip ticket. The amount of crabs, does everything look normal, were they in any chemicals? The trip tickets are filed electronically with the state daily. At any point, the FWC can stop a boat and inspect it. They can walk into the building. They make sure the crabs are handled properly, check for any safety violations, confirm they are the right size. Everything has to be just right. We’ve done this for a long time so we have a pretty good relationship. They make the required two trips per year for inspection.”

The audience questioned the cost per pound. Factors included in the price per 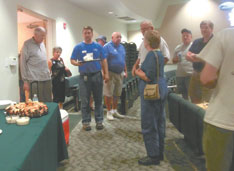 Claw tasting was a hit with the audience!

pound calculation include the availability, demand and the cost of fuel for the boats. Bryan commented, “In the bigger picture, regulations, environmental protection standards and even type of gear can weigh in on the cost the end consumer pays.” Would less regulation help? Not necessarily. Many of these requirements have been imposed to make things safe and ensure the continuity of the industry. As Justin said, “There’s a reason we do this. I would rather know I have to fill out all the paperwork and know everything is safe.” Justin said these factors are considered in the price and knowing the crabbers have to make a bit, that, too weighs in. “It’s a cultural thing, Grimm’s has worked with same boats. Many are handed down through the family. We’ve worked with three generations of their families, too.”

Someone in the audience mentioned some crabbers went on strike recently. “Not at Grimm’s,” Justin replied. The crabbers, on strike for nine days, worked for Joe’s Stone Crab located across the river at Grimm’s old plant. When asked if they got what they were seeking by going on strike, Justin said no.

The attendees were brought inside and watched as a circular wire bin with claws was dropped into a boiling vat of water to be cooked. The process is closely watched and timed. Once cooked, each claw is weighed. A forklift moves the bins. Soon another is placed in the vat to cook.

The program was three hours long, but many stayed to see a boat coming in just after 6:00PM. Undoubtedly, the $15.00 ticket price was a great value, especially considering each person had more than four claws to eat (and there wasn’t a quiz!). Bryan will hold the “Are you smarter than a stone crab?” program once more before the end of May. A similar program on shrimp will be scheduled soon.

Contact the Rookery Bay National Estuarine Research Reserve for more information on the wide variety of classes, programs and outdoor excursions they offer. You can reach them at 239-417-6310, or find them online at rookerybay.org