Are the Keys’ Reefs Dying? 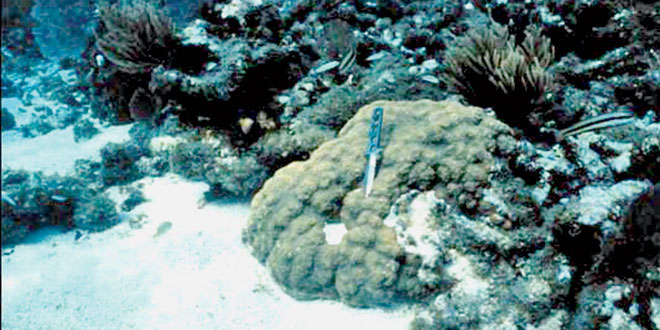 “Live corals on the east side of the Florida Keys are mysteriously dying and algae are taking over that eco-niche. Studies and mapping suggest that a number of natural factors, combined with the effects of human activity, may contribute to the corals’ demise.” – Gene Shinn, U.S. Geological Survey

It is well documented that there is a widespread loss of corals on the Atlantic Ocean side of the Keys, both close to shore as well as offshore. They are being replaced with an algae which is known flourish in high concentrations of certain nitrates and phosphates. These new chemicals are considered to be nutrients, not contaminants, but seem to originate from the treated sewage and septic systems along the Keys. Although this disposal water is released into the limestone base at depths of 30 to 90 feet, it is believed to migrate towards the ocean and those coral reefs.

Most of Florida is built on limestone, which is the remains of ancient reefs, and this substance is very porous, allowing lots of water to filter through the ecosystem. Much of the disposal water is released below a layer called the Q3 conformity. However, Q3 is not present throughout the entire island floor and, at those locations, leakage of disposal waters can occur. The waters beneath the reefs do contain nutrients, and one of them, ammonia, is highly concentrated and released at levels much more than that of normal seawater. With the change of each tide these nutrients are absorbed by the plants and corals.

There are other events taking place here as well that have an impact on the health of the reef. The Florida Keys are a great place to fish, and overharvesting certain fish that control algae on the coral seems to be an issue. There is a balance out here that should be 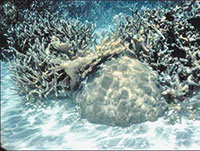 maintained, but it has been upset. Certain fish thrive cleaning the coral to obtain their nutrients, and they bring along the larger fish, which bring in the other predators.

It seems like a simple formula, but when the head coral and Elkhorn coral die these small fish have no food choices, and if they are no longer part of the system, the larger fish and their predators have no food either.

In addition, a mysterious epidemic has nearly eliminated an algae-eating urchin, diadema. Natural events such as tropical storms and hurricanes can have a more severe impact on the health of the coral in a shorter period of time as well.

Our lack of understanding of how fragile the coral can be is also a major contributor to its demise. Our Florida reef is the number one dive destination in the world, with ten times the number of visitors than the second place Australian reef. So many snorkelers and divers touch and stand on the coral, disturbing protective polyps on the exterior of the structure. Bacteria can now penetrate, and what took hundreds of years to form, is now exposed to infection, disease and possible death.

Is it too late to reverse or correct what has been done? I’m not sure. I do understand that it took hundreds, maybe thousands, of years for this reef to develop, and photos over the last forty years show a quick and drastic change for the worse.

I’ll be diving in the Keys in mid-August and look forward to providing an update very soon!

Much of this article’s content is information provided by the U. S. Geological Survey.

Bob is the owner of Stepping Stone Ecotours and is also a naturalist on board a dolphin survey boat on Marco Island. He is a member of the Florida Society for Ethical Ecotourism (SEE). Bob loves his wife very much!