Appreciation and Community at the Police Foundation Picnic 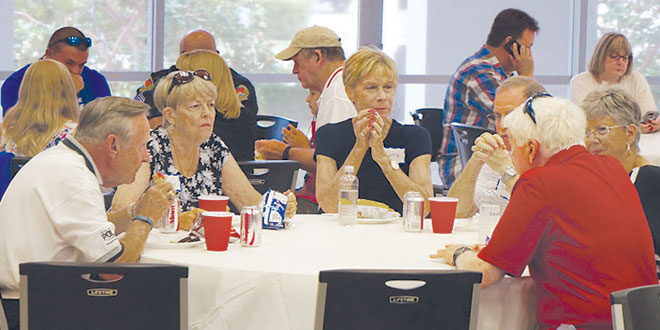 An event like the Police Foundation’s Appreciation Picnic on Saturday, August 1, reminds us how lucky we are to live on Marco Island.

St. Mark’s Episcopal Church provided the setting for this community event. Most of the 127 people who RSVP’d attended, along with 15 Police Foundation volunteers who planned and worked the event so that the officers and their families could enjoy the day.

Outside, Chief Al Schettino grilled hot dogs, hamburgers and sausages on the barbeque. Inside, an assortment of summer food and drinks were served 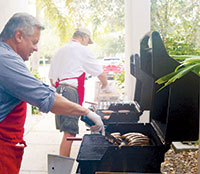 Foundation event planners made sure that the kids had a great day. An enormous inflatable waterslide was set up outside the church. It was a typical Florida hot summer day, and the children stayed cool by splashing and playing in the water. Hats and t-shirts were given to each child, the dry t-shirts proved especially handy and were appreciated by parents.

The annual event was started three years ago by former foundation president Joe Granda. Joe told us that the event was to say ‘thank you’ to the police department and foundation volunteers, who he says are “the best in the world.”

The importance of community support for our officers, which the Police Foundation helps provide, could not have been more evident when Officer Smith took the microphone.

The crowd listened intently as Officer Smith told them of fellow Officer Paul Ashby, whose wife Amy is battling a rare form of breast cancer. The Ashbys have three teenage children. Amy, a nurse, will be unable to work due to the aggressive chemotherapy treatments she must undergo. The officers set up a GoFundMe page (www.gofundme.com/ashby-sjup) and called on the community to help one of their own. 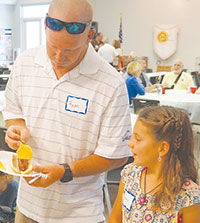 The Marco Police Foundation assists officers and employees of the Marco Island Police Department in emergency financial situations and maintains a scholarship fund for officers and their children. They also provide community services including the neighborhood watch program, and help with crowd and traffic control during special events.