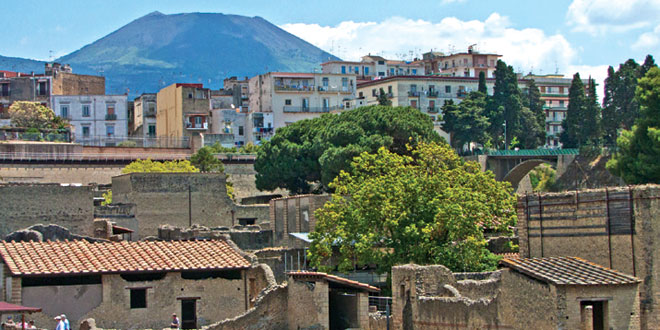 Italy is comprised of 20 administrative districts known as regions, one of which is Campania, located in the south west along the Mediterranean Sea and the location of some noteworthy ancient sites. Above Campania’s capital, Naples, looms Mt. Vesuvius, the volcano that helped preserve two of its three major antiquities, Pompeii and Herculaneum (Ercolano).

Because we could not decide which of these two locations we wanted to visit, we decided to book a tour that combined both. Normally, we hate bus tours, but this was an efficient way to visit both sites in one day. We were picked up at our apartment and our guide was knowledgeable and professional.

Pompeii was an important Roman commercial center whose origin dates to the 7th century BC, although there is evidence of settlement during the Iron Age (9th-12th centuries BC). In 79AD Mt. Vesuvius erupted, burying the town in up to 20 ft. of ash known as tephra and pumice. Its remains were first unearthed in1599, covered over and not rediscovered until the1700s; subsequent excavations have revealed details of everyday life of that period. The just over 100 acres that can be visited represent more than half of the original town; the remainder lies unexplored below the modern town of Pompeii. There is much to see and one could easily spend an entire day there.

There are remains of villas as well as more modest housing, shops, hotels, restaurants, public buildings, temples, public pools and baths, an amphitheater, and even a brothel (lupanare) complete with pornographic decoration. While most of the mosaics and frescoes have been removed and are now 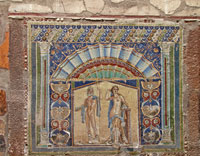 One of the preserved mosaics in Herculaneum. PHOTOS BY VICKIE KELBER

in museums, there are still some intact in situ. Plaster casts were made of the human remains. Many of them are in the Archaeological Museum of Naples, but a few remain at Pompeii. Their tortured facial expressions and twisted hands reflect the anguish of their deaths.

Pompeii is best seen with a guide or at least a guidebook to help make sense of what you are seeing. There is so much evidence of life of that time that will be made clearer with some type of guide. Guidebooks are available for purchase onsite as are authorized guide services, however, the quality of these guides is not guaranteed.

If traveling on your own, there is parking available or the site can be reached by the Circumvesuviana train from Sorrento or Naples. The stop is called Pompei Scavi, scavi meaning excavations.

Herculaneum, a seaside resort frequented by the wealthy, was also destroyed by the 79AD eruption. For 48 hours, the town was bombarded; it is estimated that the heat was 10 times hotter than the atomic explosion in Hiroshima. It was not lava that covered this town, but, rather, pyroclastic, a mixture of lava, water, and stones. That is why it was so well preserved and able to be excavated and why the human remains here were skeletal. The heat was so intense that all of the skulls found have holes in 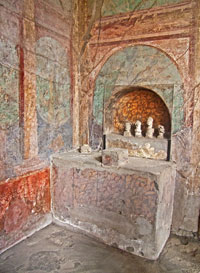 The interior of one of the remaining structures in Pompeii.

the center indicating, as our guide explained in crude terms, their heads exploded.

While Herculaneum is smaller than Pompeii, it is better preserved; carbonized wood and even food remains have been found there. Presently there is no active excavation going on, but a boat full of victims trying to flee the disaster was found as late as 1990. As in Pompeii, some of the ancient city remains buried under the modern one.

The elegant villas here still have some of their decorative mosaics, frescos, inlaid marble floors and some original furniture. Middle class housing and shops including thermapolia which offered take out food, a hotel, and temple provide more insight into life during Roman times as do the gymnasium (palestra) complex and public baths.

Herculaneum is also on the Circumvesuviana train, closer to Naples than Sorrento, at the stop Ercolano Scavi. There is about an eight block walk to the site. Parking is not readily available.

Buoyed from a good visit to Pompeii and Herculaneum, on the spur of the moment, we went to Paestum (PEST um) on our own. Because of road construction, our bus ride there from Salerno was quite long but it was well worth it as Paestum turned out to be our favorite antiquity. Its location is quite evocative; somewhat overgrown, sporting many wildflowers, gentle breezes, and not very crowded. It is the site of both Greek and Roman ruins and touts the best preserved Greek temples outside of Greece. Having visited Greece, we thought they were easily equal to the ones we saw there.

Known as Poseidonia by the Greeks, Paestum’s three temples dating from the early 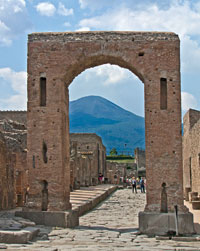 An ancient arch in Pompeii frames Mt.Vesuvius which destroyed the city in 79AD.

6th century BC are in the Doric style and so well preserved that altars are still visible in some of them. Although only about 20 percent of Paestum has been excavated, there are well intact walls, and ruins of a Greek memorial tomb, Greek Ekklesiasterion (meeting place) and agora, as well as ruins of the Roman forum, an amphitheater, housing, public buildings, and a pool. Due to natural and manmade factors, Paestum gradually turned into swampy land which brought malaria and its residents abandoned it for higher ground. Today, much of the land that was Paestum is owned privately and being farmed.

An interesting side note is that in World War II, during the Allied invasion of Italy, the US 36th Infantry Division landed on Paestum’s beach; one of the nearby temples was used as a military hospital. Photos exist of the hospital, as well as photos of troops walking and living among the ancient remains.

If you plan a trip to Paestum, be sure to allow enough time for the museum. It was wonderful. We ended up taking a later bus “home” than the one we planned because we wanted more time there. The artifacts all come from the adjacent area and range from prehistoric up to Roman times. Among the treasures are the reliefs and ornaments from the temples, Greek vases, tomb frescoes as well as objects from various tombs.

There are organized tours that can be booked to Paestum. If going on your own, there are frequent buses from Salerno and less frequent trains. From the train, it is a little less than a 10 minute walk to the site. Parking is available.