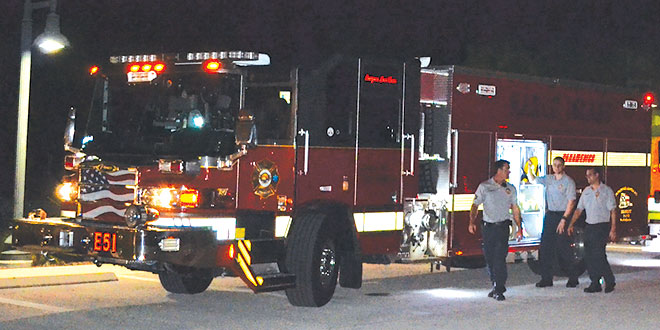 Parked outside on display, were the departments fire-response and rescue vehicles. PHOTOS BY MELINDA GRAY

On Tuesday, Oct. 7, in honor of National Fire Prevention Week and in celebration of their 50th anniversary, the dedicated men and women of the Marco Island Fire-Rescue Department gave an interactive presentation at the Marco Island History Museum. The auditorium was filled with people eager to learn about the department’s past, present and future. Also, in the audience was Nick Macchiarolo, the 100th new-hire for the fire-rescue squad.

Fire-Rescue Chief Mike Murphy opened the night by encouraging the audience to participate in each “show-and-tell” station demonstrating the different aspects of the department. The stations displayed AED (semi-automatic external defibrillator) and EKG (electrocardiogram) machines, equipment worn by firefighters, nostalgia from the department’s past and an informative display about their marine-rescue equipment. There were even hazmat suits to try on and a table where one could sit and have their blood pressure checked by a member of the fire-rescue team.

Following the interactive demonstrations, the history and importance of the Marco Island Fire-Rescue Department was highlighted in a PowerPoint. Pictures and articles told the story of their growth over the last 50 years. Just a couple hundred calls per year in the 1970s have grown now to over 3,500 calls per year; a budget of $215,000 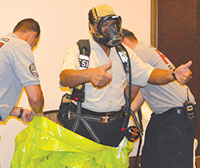 Two thumbs up from Mac Chaudhry, General Manager of the Hilton Marco Island Beach Resort and Spa, as he gladly volunteered to try on one of the hazmat suits with some help from Firefighter/Paramedic Scott Corey (left) and Firefighter/EMT Jesse Yarnell (right).

in 1980 has expanded exponentially to their current budget of more than $5 million. Naturally, they have had to expand and progress right alongside the island they serve and protect.

Marco Island has 380 multi-family buildings, 110 of which are high-rises, and more than 2000 single-family homes. Every fire gets investigated so that lessons can be learned, and thus passed on in the form of public education. They’ve learned a lot, said Chief Murphy.

Deputy Chief Chris Byrne, who has been with the department for 30 years, pointed out that there are just a few components for successful fire-rescue operations: dedicated, well-trained personnel, quality equipment and quality facilities.

The fire-rescue team is responsible for more than just fire suppression. Their operations include EMS (emergency medical services) in the form of basic life-support and advanced life-support; marine-fire and rescue; hazardous materials response, containment and clean-up; dive-rescue; high angle rescue, or repelling down a high-rise; and vehicle extrication, more commonly known as the jaws-of-life.

“The one interesting part about this is these aren’t separate people that do this. These are firefighters. They have to be just as competent in fire suppression as they are as a paramedic. They have to be prepared for marine rescues or dive calls; it is a 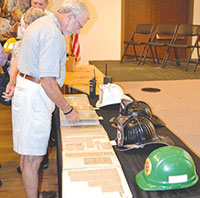 Fifty years of Marco Island Fire-Rescue Department history was displayed on the table at the front of the auditorium.

jack of all trades. They’re always ready; they’re proud to serve; and they give people hope. That’s what they are dedicated to do,” said Chief Byrne.

Their quick response vehicle is just one of their quality tools. Akin to a mobile emergency room, it is equipped with a cardiac monitor, capable of more than the standard EKG. They can also screen blood pressure and oxygen levels in the blood. The machine’s 12-lead system covers all variables of the heart, and allows them to be able to recognize the early signs of a cardiac event. They’ve had great success in catching problems early and transporting patients to the hospital where they are able to make a full recovery.

The department’s fire station on San Marco Road is a quality facility, but Chief Byrne said it needs renovation to keep up with what’s required of it.

“Today, a fire station is a community building. It has to provide the space to train and a place to live when firefighters are on their 48-hour shifts. We bring in the community for meetings, teach CPR, teach first aid and all of the alarms are received there, “said Chief Byrne. “We encourage the public to come to one of our pancake breakfast and take a tour.”