Another Year Helping Children for Kiwanis 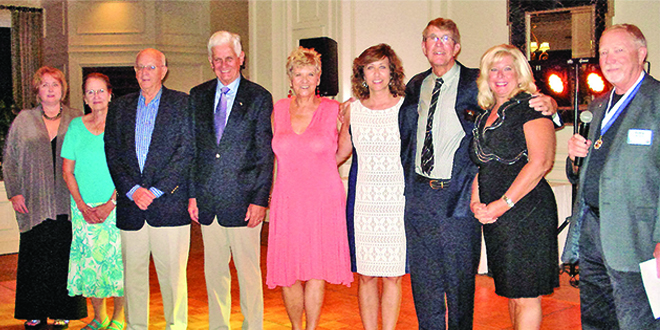 Photos by Maureen Chodaba: Outgoing officers and board members of the Kiwanis Club of Marco Island.

Donna Niemczyk was honored with the Gift of Kiwanis Award, Silver Level for inviting many new members into the organization. Irene Glynn, Secretary of the Kiwanis Club of Marco Island, received the Kiwanian of the Year Award in recognition of her dedication and service to the club.

Gary Wilson, Division 22 Lt. Governor, Kiwanis Club of Naples-On-The-Gulf, welcomed and inducted new members to the club. New members present at the installation dinner were Cindy Crane, Dr. Rick Siegel and myself. It is indeed an honor to be a member of this wonderful organization. 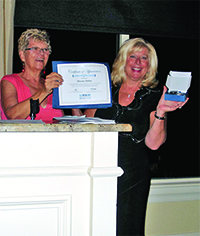 meal and dancing to the sounds of DJ Steve Reynolds, one theme reigned true throughout the evening. Children are our future!

Thanking all who wished her well in her role as president for the new year, Dr. Kathleen Reynolds spoke from her heart in saying “Every year with the Kiwanis Club of Marco Island is a good year!” Reynolds said, “Having been a member of this organization for a number of years, I know the outstanding caliber, commitment to service, and overall goodness of its membership. Members of the local Kiwanis family take the work of serving children and the community seriously, as evidenced by the things we support.” Those things include the Literacy Buddy Project of the Early Learning Coalition of SW Florida, the Terrific Kids Program, Reading is Fundamental at two local elementary schools, support for early child care programs, expansion of library resources in elementary schools, and summer camp scholarships for children from needy families.

The Marco Island club also supports active Key Clubs, a Kiwanis high school organization that introduces teens to the world of service and offers scholarships to a few graduating seniors. Santa Claus, his wife and several elves also join with local Kiwanians to present Christmas gifts to students at local elementary schools with an enrollment of 700 students and a higher than 90% poverty rate. The Kiwanis Club of Marco Island joins forces with our two Rotary clubs to raise funds and pack food for the Collier County Food Bank through Meals of Hope.

The Kiwanis Club of Marco Island has also adopted a new initiative to improve the dental health of our children, both preventively and restoratively. The club is dedicated to creating happiness and healthiness for our children. We aim to put healthy smiles on their faces!

The Kiwanis Club of Marco Island always welcomes new members. Please join us for a delicious breakfast and fellowship at Stonewalls, 551 S. Collier Blvd., each Thursday morning at 7 AM. For more information call Kathleen Reynolds at 239-394-0459, email Kreynol@aol.com or visit www.kiwanisclubofmarcoisland.org.