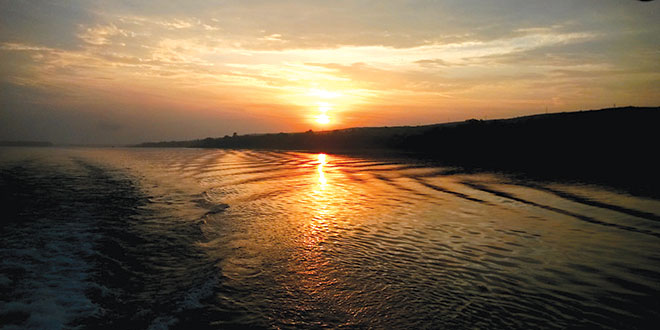 A red sunset on the eastern Danube River.

By Joan and Carl Kelly

We set up our latest trip with Grand Circle Cruise Line (GCCL). It was to be a relaxing anniversary trip on the Danube River, and romantic. We knew GCCL programs always include the difficult local, sociological and political questions, but we had no idea that we would get such a dramatic history and civics lesson.

Refugees are now passing through eastern European countries, and recent events in these countries give the local citizens a connection to the refuges. It became a discussion throughout the trip, informative and educational. Grand Circle Cruise Line does not shy away from current events as they happen.

We began our trip in Bucharest, Romania with a bus tour of the old city, driving along Victory Avenue to Revolution Square. Here we stopped to meet Edmund, who was a youth during the 1989 revolution against communism. He was in this square when the shooting started.

He told us his story.

The people had gathered because the dictator Nicolae Ceausescu was to deliver a nationally televised speech, complete with orchestrated crowd response 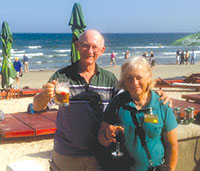 Carl and Joan Kelly toast their host country after wading in the Black Sea. SUBMITTED PHOTO

from 80,000 people. But they were hungry from imposed austerity, and began shouting, “We want bread.” That soon turned into “Down with Ceausescu.” Then, the secret police began shooting from the rooftops and windows around the square.

Panic, chaos, anger; In his rage, Edmund grabbed a Romanian flag and cut the regime’s crest from the center, then waved it in the air. Suddenly, he was a leader of the youth.

That was December 21, 1989. Over the next four days the military turned on Caeusescu, arrested him, gave him a brief trial, then executed him on Christmas day.

Edmund showed us the flag, “Most people wave their flag; I wear mine.” He draped it over his head and shoulders, and then continued his story, “On December 21st there was no food to eat, but the day after Christmas there was bread.” Also, there was clothing, toilet paper and all of the other necessities that had not been there four days earlier.

Edmund is proud of his country. They were brave in 1989 and have come a long way since. 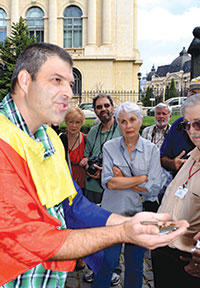 Edmund tells his story to tourists in Bucharest’sRevolution Square. PHOTOS BY JOAN AND CARL KELLY

That is typical of the people we met in the five countries we visited. They share a similar recent history of shedding oppressive government, and they all have powerful stories to tell. They have all personally known deprivation and hunger. And, notably, they all express a kinship with and compassion for the hungry Syrian refugees now fleeing tyranny and crossing their countries.

Note: We do not remember Edmund’s last name. An inept Budapest pickpocket missed his target and got my notebook.

The Danube River flows into the Black Sea at Constanta, our next destination. Constanta is an ancient city complete with ruins and artifacts. But the Black Sea most attracted us, as all bodies of water do for all mariners. We touch, wade or swim in any water that is new to us; therefore, also this sea and the Danube.

Aboard our ship, the River Aria, we run east from the Black Sea mostly through low farm country and small towns. Here the Danube is quiet, but not lazy, beautiful but not romantic. Not yet. Our destination tomorrow is Ruse, Bulgaria.