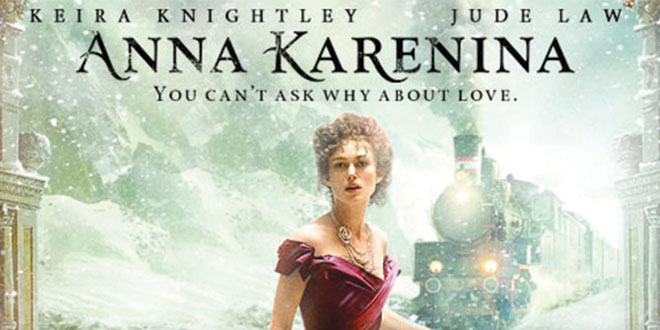 Leo Tolstoy’s “Anna Karenina” is generally considered one of the greatest novels ever written. It’s been made into movies 13 times, and the Greta Garbo/Fredric March version of 1935 is widely recognized at the best. This latest edition is a balletic show-within-a-show that dances back and forth from footlights to backstage to “reality”. Despite the heroic staging, magnificent settings of St. Petersburg and Moscow of the late 1800’s, and a screenplay by Tom Stoppard, it falls far short.

Keira Knightley as Anna is beautiful, but unconvincing. Jude Law is excellent, but wasted as her husband, a dry government official. Sadly or, perhaps comically, Aaron Taylor-Johnson as Count Vronsky, looks very much like a well-dressed Gene Wilder in “Young Frankenstein”. There are myriad others in the cast, mirroring the broad sweep of Tolstoy’s story, complete with reflections on adultery, jealousy, class/society, values and hypocrisy. The movie is an elaborate dance with stops and starts that serve more to detract than 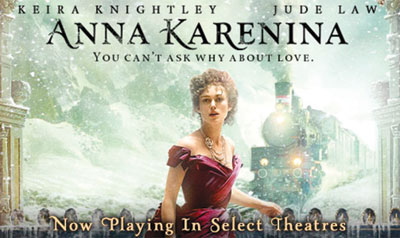 The plot is familiar. Anna meets Count Vronsky on a train and accidentally runs into him again wherein the attraction develops. When she returns to her husband she realizes that she has no feelings for him, and desperately wants to be with Vronsky. Meanwhile, there is a separate tale of Levin (Domhnall Gleeson), a landowner, who falls in love with Kitty (Alicia Vikander). He and Kitty represent pureness and virtue – the antithesis of Anna and Vronsky.

Anna loses herself in hopeless addiction to Vronsky. She imagines Vronsky as unfaithful to her, and grows desperately ill as she carries Vronsky’s baby. She recovers her physical health, but deteriorates mentally. Vronsky is puzzling. Does he really love Anna? Is he simply a vapid social climber without much to redeem him?

Karenin maintains his rigidity, but behaves properly. Anna pursues Vronsky, and is snubbed at the theatre by St. Petersburg’s society. She finally crumbles, and the melodrama ends.

Director Joe Wright’s experiment is ultimately a failure. Despite its sweep and the majesty of the dance scenes, the result is mechanical and ultimately unsatisfying.

Glass: A Pretentious DisappointmentThe Irishman: Another Classic from Martin Scorsese