Andrew Guidry, D.O.: The Marco physician who went to war 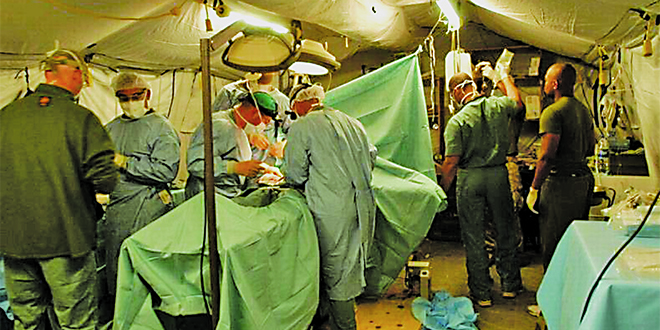 On October 23, 1983, the U.S. Marine Corps suffered its biggest single day death toll since the battle of Iwo Jima in 1945. On that day, a group calling itself Islamic Jihad drove a 19-ton stake bed truck, packed with the equivalent of 21,000 pounds of TNT, into a barracks at the Beirut, Lebanon International Airport. Three hundred fifty U.S. military personnel, part of a multi-national peace keeping force, were sleeping in that four-story concrete building, which collapsed as a result of the blast. Among the dead were 220 Marines and 18 sailors. An additional 128 lay wounded and bleeding. Thirteen of these later died. Nineteen-year-old U.S. Navy Corpsman, Andrew Guidry was in that building. Today, Guidry is a successful Marco Island physician and single parent, raising two beautiful daughters. That is another story. But it was the U.S. Military that helped him get here. His journey led through a lot of blood, sweat, and sacrifice.

Upon graduation from high school in 1981, Andrew became a U.S. Navy corpsman. (He had plans to become a physician and wanted medical experience. He quickly got more than he bargained for.) Navy corpsmen, like army medics, are the first responders to medical emergencies. His first tour of duty was at the Marine Corps base at Camp Lejeune, North Carolina. In 1983 he was deployed to Beirut, Lebanon with the 8th Marine Regiment, as part of a multi-national peacekeeping force. Corpsman Guidry didn’t know it then, but this was to be the first of three combat deployments for him. In Beirut, Seaman Guidry lived and worked in the same building with the marines. He and the other navy corpsmen held sick call there every morning. Local Beirut merchants had the run of the place, with their trucks being waved through security all through the day. No one saw what was coming. On the morning of October 23, Corpsman Guidry became a part of the horror and devastation of a terrorist attack, which was to set the tone for the next 33 years. Andrew’s Marine unit was living in what he described as a four-story parking garage at the Beirut airport when all hell broke loose. “We were having morning sick call in our half of the Marine barracks,” he said, “Suddenly, there was shouting and small arms fire outside. I ran outside in time to see a truck barrel into our building, followed by a tremendous explosion, which caved in the other half of the building and knocked us to the ground. It was complete mass chaos. There were hundreds killed. The entire parking lot became covered in wounded. All we could do was 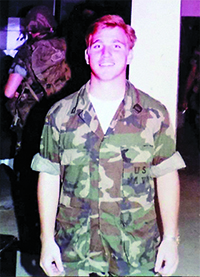 triage. Each corpsman had at least ten wounded to attend to. We could see that some of them weren’t going to make it. We would dress the wounds, try to stabilize the patient, and then move on to the next. Only two doctors and a dentist were available.” The enemy combatants followed up by a daily shelling of the compound with mortar rounds. Within a month the corpsmen were sent home. All the corpsmen received the Navy Expeditionary Medal, for operating in a combat zone under circumstances which merited special recognition.

Andrew later joined the Oklahoma Army National Guard in the early ‘90s, while attending medical school. In 1994, when he began his medical residency in Tampa, he transferred to the Florida National Guard (FNG) based in Orlando. By 2003, Dr. Guidry had advanced to the rank of Lt. Colonel, and was designated as the brigade surgeon for the FNG 53rd Infantry Brigade Combat Team, a unit of about 1,800 soldiers and the largest National Guard unit in the state of Florida. In April 2003, the 53rd was attached to the U.S. Army’s 3rd Armored Cavalry Regiment and sent by air and ground assault convoy into Ramadi, the capital of Iraq’s volatile Anbar Province, 73 miles west of Baghdad. The 53rd was to later receive the Valorous Unit Award (equivalent to a Silver Star for individual heroism) for extraordinary heroism in combat operations. They had been through 291 continuous days of combat. It became Col. Guidry’s job to accompany his men on combat operations and visit their far-flung small posts, scattered in their 927 square mile territory. It was the traveling on Iraqi roads where most of the killing and maiming occurred. Col. Guidry had to do this on a daily basis. “When I made my scheduled visits to our posts, we had only one Humvee and an ambulance,” Dr. Guidry said, “Our soldiers were getting killed and horribly wounded along these roads every day. The stress was affecting all of us. During my first week there, I experienced what could only have been a panic attack. Fortunately it never happened again, but the dread of the frequent road trips never left. It was the IEDs (improvised explosive devices) that we feared the most. There was no defense against them.”

Col. Guidry was stationed in an old Iraqi Army maintenance depot between Ramadi and Fallujah. “We got mortared every day,” he said, “but the rounds mostly bounced off the reinforced concrete roof. When we got there, roadside bombs were the big thing. About halfway through our [six month] deployment, suicide bombers appeared.” Col. Guidry was called in to determine the manner of attack 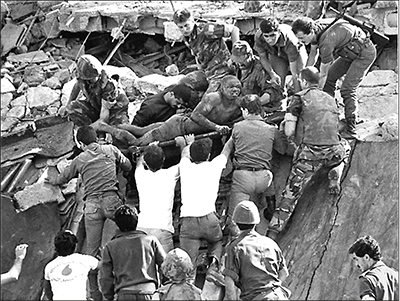 Navy Corpsmen administer first aid to one of the 128 wounded Marines from the collapsed Beirut barracks.

in what appeared to be a new development. “On a routine patrol, an explosion occurred beside one of our Humvees,” Guidry said, “It happened when a motorcyclist had come alongside the Humvee. The driver was completely shredded and ripped up. The commanding general wanted to determine if the blast had come from an improvised explosive device (IED) roadside bomb or from the motorcyclist. I had seen and operated on many IED wounds and determined that this wasn’t one of them. I told the general that these wounds could only have come from explosives, strapped to the motorcyclist. I added that from now on, we would probably have a whole lot of this sh*t coming at us.”

Because of a shortage of field surgeons, Col. Guidry accompanied his men on raids and patrols. At all times, Guidry carried his M16 with him and on occasion returned fire coming in on one of his patrols. “When not operating on the wounded, I kept my M16 close at hand” said Andrew. “On at least one occasion, it probably saved my life.” Intelligence had detected increased enemy activity in one of the area towns. An entire battalion of 600 men surrounded a walled neighborhood of about 64 homes, preparatory to searching the interior. Col. Guidry set up next to the wall to await the wounded. “I was standing with my back against the wall,” he said, “There was small arms fire, but as yet none in our sector. I saw some movement to my left and saw that a door in the wall, four feet away, was slowly opening outward. A rifle barrel then protruded, followed by the hadji (a pejorative term used by soldiers), who was holding it. Reflexively, I fired my rifle, killing the hadji with a short burst to the head.” Col. Guidry found nothing extraordinary about this incident. He had been shot at before, sometimes returning fire but this was the first time he had killed someone – as far as he knew.

Six months after completing his tour of duty in Iraq, Col. Guidry was deployed to Afghanistan and was assigned to the sprawling Bagram Air Force Base at Kabul. He modestly described this tour as a 9 to 5 job, helping to administer the large medical complex there. Killings from penetrating suicide bombers and shootings by defected Afghan soldiers weren’t to happen there for another ten years. Arriving back in Marco Island in November 2004, Dr. Guidry was finally free to devote all of his time to his medical practice. It had suffered during his periodic deployments, both stateside and overseas.

Next edition: Tragedy and Triumph – Dr. Guidry returns to his Marco Island practice.