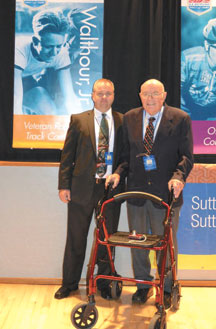 My uncle and me under my grandad’s banner.

At the beginning of November, I had the distinct honor of representing my dad’s side of the family as his father, Bobby Walthour Jr., was inducted into the United States Bicycling Hall of Fame, class of 2011. My grandfather’s induction marks three Walthours currently in the Hall of Fame along with his father, Bobby Walthour Sr. (class of 1989), and his cousin, Jimmy Walthour (class of 2000), and hopefully more to come!

The weekend’s events were just spectacular. On Friday evening, there was a small meet and greet at the Hall of Fame with some past and current inductees. The other inductees along with my grandfather this year were, Ruthie Matthes, world champion mountain biker, Marty Nothstein, Olympic track gold medalist and Mike Sinyard, founder of Specialized Bicycles.

Saturday afternoon my cousin, Bobby, was a participant in a track cycling symposium in which track cyclists from many past and current eras told stories about their days of cycling and also answered many questions from the audience about the history of track racing. One audience member was Gary Fisher, inventor of the modern mountain bike.

The induction ceremony was held on Saturday evening in a grand hall on the grounds of UC Davis. The foyer was adorned with a red carpet leading into the entrance to the grand hall. That alone makes you feel kind of special, although not so many flashing lights! Once inside there were banners representing all four inductees preceding the event area itself. Inside the grand hall, as a 10-piece band played in the background, a silent auction was held with everything from an autographed Lance Armstrong bike to rare bottles of wine. There was a display of some memorabilia from the four inductees, my grandfather’s, in particular, was his original track frame and handlebars on which he won his amateur cycling championship in 1921.

The ceremony started with a video montage of each inductee’s career highlights and their induction plaques were presented to family members. My cousin, Bobby, received the plaque on behalf of our family, and I have to say, what a great speech he made in honor of our grandfather! Keynote speaker for the 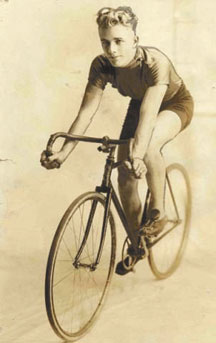 event was Bob Stapleton, former owner of Voicestream Wireless and current owner of the HTC High Road Professional Cycling Team. During the evening’s events awards were presented to current USA cycling athletes who are standouts in their prospective areas of cycling.

Some of my grandfather’s career highlights are multiple six-day cycling championships. Six-day races are an event with two man teams who ride continuously for six days one riding as the other rests. They often covered more miles than the Tour de France does in three weeks. Over a 12-year span my grandfather competed in 89 events throughout the U.S., Canada and Europe, placing on the podium in more than half of the meets. He also won hardware in four of five triple six-day races he entered in 1934 and 1935.

Since 2008, the Hall of Fame has been located in Davis, California and I must say what a great location it is. Just nearby is a wonderful little park called Central Park, just a stone’s throw away from UC Davis campus. Davis boasts more than 50 miles of bicycle paths and more bicycles per capita than any other city in the nation. With a population of about 65,000 people, nearly 25% of all residents commute by bicycle. During the ceremony the City was presented the platinum award by the League of American Bicyclists for being a bicycle friendly community.

The Hall of Fame was originally founded in 1986, and located in Somerville, New Jersey, which was at the time home of the United States’ oldest bicycle race, the Tour de Somerville. The tour’s founder, Pop Kluger, was the Hall of Fame’s first inductee.

The weekend was special for many reasons, especially deep pride in my family’s bicycling accomplishments over three generations. The memory I will cherish the most will be observing my Uncle Bob’s emotional reaction to the whole event, as his dad became a member of United States Bicycling Hall of Fame.