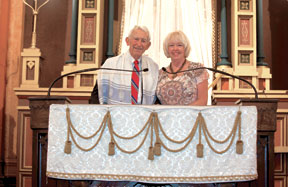 Eddie and Karen at the ceremony. PHOTOS BY AARON ASCH

In late August we received an invitation to attend a Bar Mitzvah in Cincinnati, Ohio. The invitation was printed on an exquisite stock in classical fashion. The cover page had a photograph of a certificate indicating that it was granted to: “Edward Saeks, who has successfully completed the course of studies of his Hebrew School and is herewith qualified for entrance in to Higher School of Jewish studies.” The date on the certificate was 6th of June, 1943. “A good touch,” I said to myself. Dr. Eddie Saeks’s grandson or great-grandson is going to celebrate his Bar Mitzvah and we have been invited.

Once I looked inside the invitation I was surprised to see the photo of my dear friend Dr. Eddie Saeks of Marco Island and Cincinnati. The photo was not exactly that of a 13 year old Eddie but of a very young Eddie anyway. Getting more curious by the minute, I read on. “At 83 he is about to reach 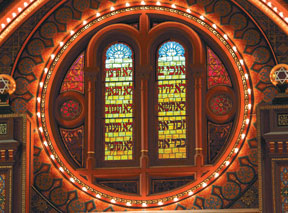 another… But this time you can be there!”

This was an invitation to Dr. Eddie’s second Bar Mitzvah! I was shocked, surprised and happy all at the same time. The invitation went on to explain, “In his book of Psalms, King David proclaimed the lifespan of a man is 70 years. If he should live beyond that age, it’s as if his life has started again. When 13 years have passed, and he becomes 83 years of age, it is a wonderful and happy tradition for him to celebrate his second Bar Mitzvah with family and friends.”

My friend Dr. Eddie and his dear wife Karen were inviting my wife and I to attend his second Bar Mitzvah on Saturday, September 15, 2012 at the Plum Street Temple in Cincinnati, Ohio! Enclosed were very detailed and precise instructions as to where everyone had to go, how to get there, at what time and how to dress. Karen sure took her time to organize everything in a 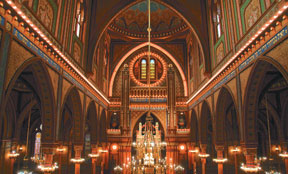 My wife and I purchased our tickets and notified Karen of our intention to be there but asked her not to tell Eddie. We wanted this to be a surprise because we did not think he would expect to see us there. She was kind enough to agree and we were on our way to Cincinnati on September 14.

We checked into the designated hotel in Blue Ash, Ohio which was just a few miles away from Eddie and Karen’s summer residence. At 6:00 PM we walked down to the ballroom where a small cocktail party was planned with Eddie arriving after all the guests were present. Around 6:30, Eddie walked in shaking hands, hugging and kissing the guests. I was standing by the bar when he noticed me. It was a most memorable moment which was captured in a photograph.

Dinner with Eddie and Karen’s friends and family was a wonderful treat. Before dinner we were given the opportunity to look closely at 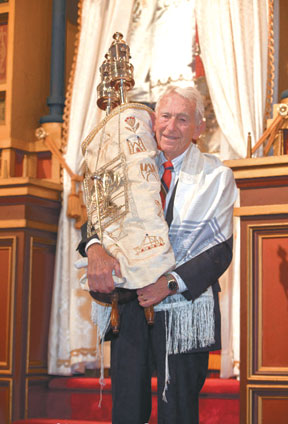 Karen’s Bar Mitzvah gift to Eddie. Karen had photographs of Eddie’s close family printed on fabric in order to have them sewn on this 70 year old Tallis.

The next morning we boarded mini-buses and were driven to downtown Cincinnati, approximately forty miles away. The Bar Mitzvah ceremony was held in the “Wise Temple” on Plum Street. This was a very historic building. Since 1866, Plum Street Temple has been one of the most celebrated sanctuaries in the world and the “flagship” of the Reform Movement. Built to reflect the high hopes of Rabbi Isaac Mayer Wise, the father of American Reform Judaism, the temple evokes the roots of Judaism from many lands and eras. The building reminded me of structures I had visited in the Middle East and Northern Africa. It was covered wall to wall with most intricate carvings and adorned with high domes.

The ceremony was very emotional and solemn. Eddie gave a very touching speech, talking about his family and their journey from 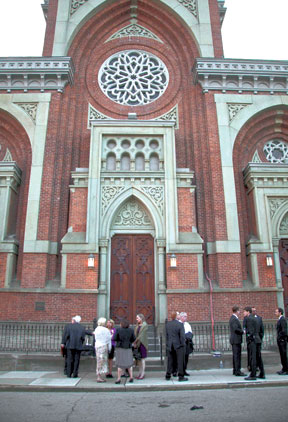 Lithuania, where they lived “in dread of oppression, prejudice and brutality,” to the United States, “because of their desire for a life of freedom, safety, and future with hope.” He interrupted his speech periodically to ask the Rabbi if it was raining inside the temple as his tear drops kept falling on the paper he was holding in his hand.

“How can I dedicate this day without in some way, recognizing what this country has given to me and I suspect to all of you as well.” He concluded, “Where else can each of us practice the religion of our choice, without repercussions up to and including death? Where else can we openly state our viewpoints, even if in opposition to prevalent beliefs? No jails, no beatings, no numbers on our arms. In fact, no punishments at all because that is one of the foundations of our country.”

Karen closed the ceremony with her chosen words for the occasion. “Eddie is wearing his original Tallis. It 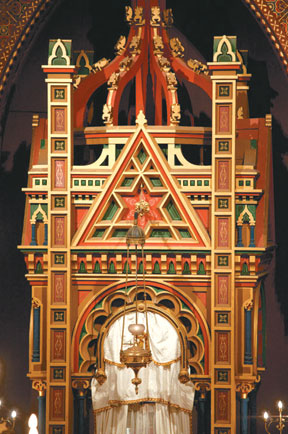 has served us well, first as our chuppa and now at his second Bar Mitzvah. Only this time, with heirloom pictures of his grandparents, parents and brothers, so he could be wrapped in their loving arms of yesteryear. Your parents laid a solid foundation and you chose to build upon It. Your Judaism has always been an integral part of your life. In fact, now more than ever.”

As we walked out of the Temple, my wife and I were also experiencing the same rainfall Eddie was asking the Rabbi about as he made his speech.

The day continued with a most interesting and lovely river boat ride on the Cincinnati River and ended with a magnificent barbecue party for all the guests at Eddie and Karen’s residence’s club house.

It was a wonderful Bar Mitzvah for a wonderful man whose life was, in so many ways, similar to the lives of those of us who came to America as the last beacon of hope, opportunity and promise of a life lived in love and peace.