An Osprey Rescue, With a Happy Ending 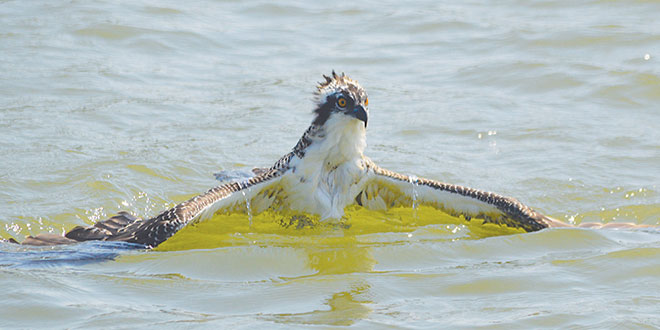 Obviously in distress, this young Osprey was fighting to stay above water. SUBMITTED PHOTOS

It’s Saturday, May 2nd, the Dolphin Explorer’s 9 AM trip is on the water and something special is about to take place. With 19 happy passengers on board, the tour started as usual, with several dolphin sightings of adult males and even a mom and her calf. We passed a few Osprey nests and the guests took interest in the information that we shared about these raptors.

As we made our way up the Intercoastal toward Keewaydin Island, I noticed something in the water flapping its wings furiously. Using my binoculars I was able to determine that it was an Osprey. My first instinct was that this bird had grasped a fish that might be too big to take from the water. I’ve heard stories from fishermen about

Ospreys that grab a large fish and, because of their strong grip and the additional small spikes on their feet, they cannot let go and the bird will drown. There is even a story about a fish that was caught and the talons (claws) of a bird were still in the fish’s skin…no bird, just the talons!

As we drew closer I could see the color of the Osprey’s eyes and knew immediately that it was a juvenile. When born, these birds of prey have blue eyes. They quickly turn to an orange color, which stays that way until the bird is 18-24 months old. When 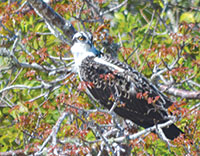 Seen again on Sunday, the rescued Osprey was in a tree branch, looking calm and ready to resume a normal life.

they mature, the adult Osprey has eyes that are yellow.

Even though this young one had some size, it occurred to me that it was in trouble. It is not unusual that two siblings raised in the same nest will battle for food from the parents, and sometimes the more dominant of these two will push the other one from the nest. That may have been the case here. Also, it seemed that this youngster was of a physical stature that it might be practicing its take-off from the nest. It was a breezy morning and it could have been blown over the nest, landing in the water. Young Ospreys begin to fly (fledge) when they are 7 to 8 weeks old. In any case, the bird was in a situation that it had not experienced before.

As we approached, it was obvious there was no fish in this young one’s talons. It was doing everything in its power to stay afloat and it would not be long before shock and exhaustion would overtake it.

Captain Bob Erikson skillfully guided the Dolphin Explorer alongside, while I grabbed a net from our storage area. Once in range we successfully captured the bird. There was a stretch of sandy beach not too far from the nest, and Capt. Bob guided the boat to shore. With cooperation from our guests, a path was made so that I could 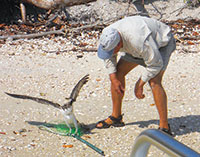 On the beach, Bob readies the bird for release from the net.

exit the boat via our front ladder, and I took the Osprey to land.

Here’s when things got even more interesting. The bird was tired and possibly in shock. I was able to grasp it carefully from behind, after assessing that there was no damage to the wings. In a state of panic, and not knowing at all that we were trying to help, the raptor grabbed hold of the net as I raised it from the ground. I did not have enough hands to hold the Osprey and free its feet at the same time.

Two of the guests on board offered their help, which was gladly accepted. I placed a towel over its head and eyes to calm it, and again grasped the wings and body. With one foot already free, the guests carefully removed the netting from the other foot. Once free, the Osprey was released on the beach.

I looked around and noticed one of the parents in a nearby tree, watching my progress. As in many cases throughout the animal kingdom, you do not want to get between a mom and its young. That can be quite dangerous. However, this mom sat quietly and only observed.

There did not seem to be any physical problems with the rescued animal. The wings were lying properly in place along side of the body and the

feet were in good order. Knowing that mom was aware of her youngster’s location, we went on our way. We passed by that same location about an hour later and the juvenile was still in the same place. Passing by, on our 1 PM tour, we noticed the young one, still on the beach, and with mom still nearby.

All onboard hoped that some rest and some time to dry the wings would result in a happy ending. We were rewarded with that ending the next day. On Sunday’s 9 AM tour we stopped by the same location and saw the rescued bird in the branch of a tree.

Both parents were close by and the adult male was eating a fish.

Capt. Bob and I smiled at each other, knowing that food was being provided to the rescued party. I think this one will make it.

Ospreys are found in just about every corner of the world, except the extreme North and South Poles, and their survival rate varies based upon the type of habitat and conditions available. I’ve read that about 60% of the young ones in South Florida make it to adulthood.

Maybe we’ve increased that percentage a tiny bit for this year.

Bob is the owner of Stepping Stone Ecotours and a Naturalist on board the Dolphin Explorer. He is also a member of the Florida Society for Ethical Ecotourism (“SEE”) and Bob loves his wife very much!