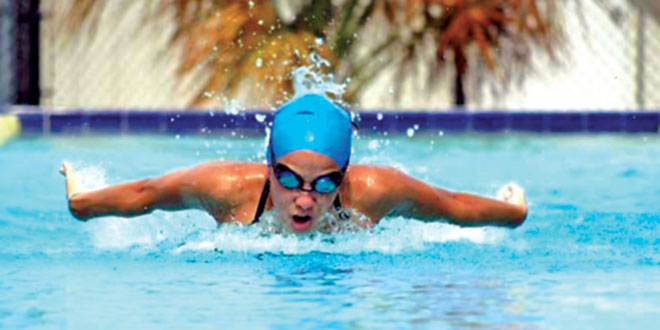 Flying out of the water at the 2008 Summer Olympics in Beijing, Mercedes Farhat’s 100 meter breaststroke heat.

It has been eight years since Marco Island’s Mercedes Farhat stood on the starting block for her 100 breaststroke Olympic heat in the 2008 Summer Olympics in Beijing, China.

A Lely High School graduate just two months before, Farhat was in a stratosphere of world-ranked competitors.

As her heat race ended, all Farhat thought was, “I am not going to let that girl out touch me.” She didn’t.

A top Florida high school swimmer, Farhat won her heat, but did not record a fast enough qualifying time to continue.

Yet there were so many big-time moments for her to remember.

With the opening Olympic parade she was the lone woman representing her father’s home country of Libya.

Her competition name was Asmahan Farhat.

“It was so cool. I was part of the women’s rights 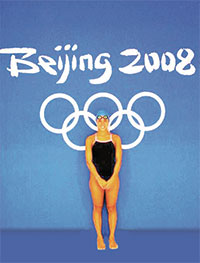 movement in Libya, opening the doors for other women to follow,” she said.

Farhat trained for the 2012 Olympics, but due to social pressures and political strife that followed the 2011 Libyan revolt against dictator Moamer Kadhafi, swimming pools and clubs became almost non-existent.

In 2016, with friendly support, Libya’s Daniah Hagul competed in the Rio Olympics. She swam the 100 breaststroke, but did not move on after the first round.

In 2008 the historic Libyan clothing was such a standout, even TV crews set cameras down to get photos of Mercedes and dad Kamal, her swim coach.

It was layers of clothing topped off with a huge gold necklace “that draped over my entire chest,” Farhat said. “Then a scarf around my head and more gold jewelry from that and huge gold 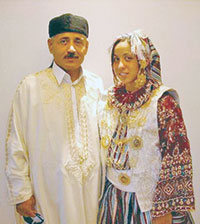 bangles around my wrists.”

All that and the athletes didn’t get to see the show. They waited outside to be called into the parade. They were No. 99 on the parade list.

“We could see the fireworks though, which were amazing,” she said.

Ironically, only those in the arena got to see the Farhats in the parade.  A jammed crowd at Mercedes’ home in Marco were ready to cheer, but a break in TV coverage took place as the Farhats were to march. Mercedes later saw it on video replay, but no one at her home, or around the country, saw it live.

No matter, the excitement continued.

Before her heat she warmed up in the same lane with Michael Phelps.

“It was crazy, it was nuts,” Farhat recalled. “I have posters all over on 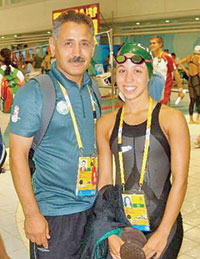 Mercedes with her dad and coach Kamal before a practice round

my bedroom walls of him. I have three of his biographies, but never got them signed.”

“I was right next to him. I can honestly say that you swim faster when Michael Phelps is in your lane.”

In describing Phelps swimming past her, she said, “Normally a big guy will make the water choppy. I could feel his power that pushes the water, there were barely forceful waves. It was so smooth. I wondered if someone actually passed me.”

At the time new suits, Speedo LZR Racer and a Blue 70, were being boasted as the fastest suit ever created.

“If you signed a contract to wear the suit in your race they were giving them away,” Farhat said.  “Speedo gave me a $500 swimsuit that was not even on the market yet!” 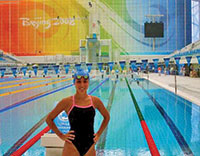 In the Cube, Mercedes before her swim. Submitted Photos

her efforts, Libya gave her the Most Valuable Athlete medal, which was saved along with the many swapped Olympian pins.

Her most cherished pin was from Dara Torres, at 41, the oldest swimmer to medal in the Olympics.

Torres was a University of Florida grad, and Farhat was in her freshman year.

“She wasn’t giving out pins, but I didn’t care, I had a photo of her since I was six years old and I went for it,”
Farhat said.

Torres chatted with Farhat and they shared a Gator chomp. The next day Torres gave Farhat her pin.

Farhat has connections with Olympians Ryan Lochte, Elizabeth Beisel and Caeleb Dressel from being undergrads at UF. Dressel shared gold in the 4×100 relay at the Olympics, with Phelps, Nathan Adrian and Ryan Held.

“Ryan Lochte was a

Following her University of Colorado graduation, Mercedes with mom Christine and dad Kamal.

lot of fun and Elizabeth is one of the funniest people I know. Anything she says seems to be hilarious,” Mercedes said.

After an outstanding 2012 Olympics, Lochte could only notch a gold medal in the 4×200 relay with Phelps, Connor Dwyer and Townley Haas.

Farhat marvels at how the sport of swimming has just taken off in the last eight years.

“Swimmers are crushing records,” Farhat said of this Olympics. “They are setting records by seconds.”

Katie Ledecky set two world records in this Olympics on her way to an overall five gold medals and one silver.

She breezed to a world record win in the 800 meter freestyle.

After touching the wall she casually waited for the rest of the competitors. Ledecky set a world record time of 8:04.79, eclipsing her former record 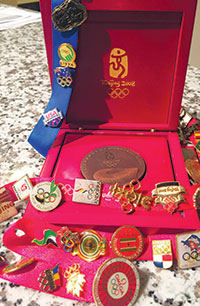 Submitted PhotosMercedes Farhat’s Most Valuable Athlete award, and a host of Olympic pins she swapped for at the 2008 Summer Olympics.

The daughter of Kamal and Christine Farhat, she has a sister Louisa. Mercedes and Louisa helped set many records while members of the Lely High School swim teams from 2004 to 2008. Louisa has an engineering degree from the University of Florida. She now lives in San Francisco where she is a sales engineer.

Eight years ago Farhat said of her experience, “Just being in the Olympics will be something I will always cherish. I can always say, ‘I was an Olympian.’”

Her feelings remain the same.