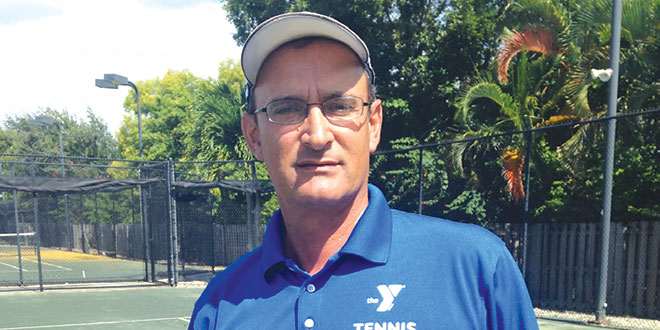 Roberto Saad was ranked number 36 tennis player in the world in 1988.

Meet Roberto Saad, the Marco Island YMCA’s newest tennis director. Roberto’s life and tennis career has been nothing short of amazing. He’s traveled all over the world, played in tournaments such as the Davis Cup, won two doubles titles, and in 1988 he was number 36 in the world, a feat very few can claim. Now, he’s here on Marco Island to share his wisdom of the game and his philosophies on life, which to him are inextricable.

Let’s start with the beginning, when did you first start playing tennis and how do you get involved with the sport?

Well, my family belonged to a tennis club down in Argentina. My dad, he was a physician, and was into sports. He was the doctor for a professional soccer team and he was an avid tennis player. I started playing tennis at the club when I was about 7. My brother Raul and my older brother Ricardo— we were all very good players. We picked up the sport rather quickly and we fell in love with it. My father was a very good instructor; he was studious of the game. We had two or three other pros at the club who were also very good.

So you had a lot of resources available to you?

How did you go from playing tennis at the club to playing professionally?

Positive reinforcement helps you get to the next level. If you’re successful in one level you will strive to move up and go to the next. So it was a gradual progression. Going from a little boy to a good junior player, to a top junior player, and then transitioning to the professional level. 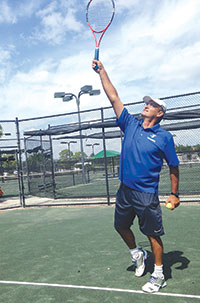 Roberto believes his experience playing professional tennis helped shape him as a person.

It takes several years. You have to have patience, dedication, a vision and a goal. Time will take care of all of that.

How old were you when you started playing competitively?

I was 15 years old and I was competing with the top adults from the States and the region. I was giving them a run for their money. Once that starts happening you know you’re there and it’s just a matter of timing, the breakthrough, and making the right decision, too. One of the right decisions I made was to come to the United States to study here in high school. This was back in 1979, my father always wanted me to study and play tennis at the same time and the only place that we could do that was here in the U.S.

Can you tell me a little about your experiences playing professionally?

In life it’s very important that the experiences that mold you and create your character are positive ones. You’re going to have some negative ones along the way, but the negative ones I minimize them. I don’t pay much attention to them. I build up on the positive experiences. The traveling, the competing under pressure, the recognition, the skills, the development that you have to go through. I will never forget playing in Grand Slam events, worldwide TV, playing the Davis Cup event where you got twenty-some thousand people screaming at you and the team.

The human experience has to be transferred! Because then if somebody doesn’t want to transfer those experiences, it’s a waste. It goes to the grave with you and it’s wasted. 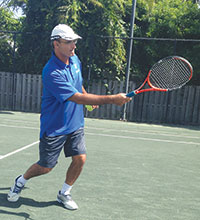 with the people you teach?

Of course. My experiences are part of my knowledge on what I am. I transfer the experience to them.

What brought you to Marco Island?

I was living in Fort Myers and I had my own tennis club there. My brother Raul was here in Marco Island as a tennis director and he invited me over to do some clinics with him and to see his operation and his facilities. So I’ve been coming to Marco for the last 3-4 years.

What part of being the tennis director do you find most appealing?

I like the organizational part, I like the instructional part and I like to create programs for people. But also I like to fulfil their potential. I want them to walk away from the tennis courts after a lesson feeling that they learned something, and that they gathered information and knowledge through that process. So if I can make somebody’s day happy, then I’m happy.

So when someone comes onto your court they’re going to leave feeling better?

That’s my goal, for them to acquire knowledge and experience and leave on a positive note. That’s very important because you’ve got a limited time with your client and you want to bring the best out of them and provide to them whatever venue or way for their problems to be solved. People come in with all sorts of inclinations in the tennis court. Some people want to learn the game very well, some people come in trying to compete, and some people come in because it’s a social, healthy activity for them. So you get a bunch of scenarios and you got to meet each person’s needs, and that’s a challenge sometimes. It’s part of the job to not let you go frustrated.

If you would like to schedule a lesson with Roberto call the YMCA at 239-394-3144. The tennis program offers private lessons, clinics and round robins. There are lessons available for children, adults, intermediate players and beginners.