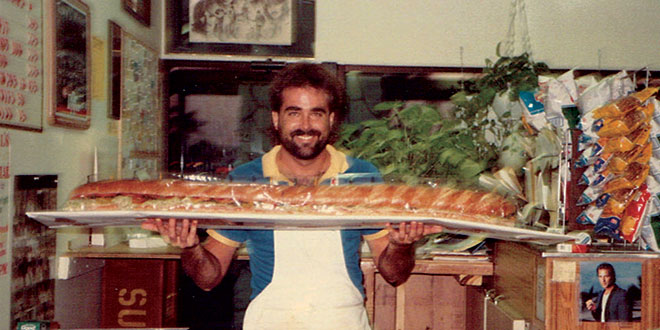 Al Landers is known for bringing many restaurants and cuisines to the island, including deli.

A few months ago I did a story on Reno Landers, the part-time Marco Island resident who miraculously survived a skydiving accident. Recently I met up with his father Al Landers, to talk about Reno, as well as Al’s longtime role on Marco. Al has been here for over 30 years and is responsible for many of the restaurants us islanders consider staples. Al’s an interesting guy with a ton of experience. He’s been to culinary school, is good friends with Chef Bobby Flay and even spent some time in South America with the band Queen. We talked about everything from Reno’s recovery to the time he and his buddies initiated Marco Island’s first-ever boat parade. Here is our conversation.

What was it like to hear that your only son was in a skydiving accident?

I was gone for six months. I went on a guy’s trip all across different states. When I came back I was here the second day and I was at Ace Hardware. No one knows I’m back and one of the employees said to me, “Hey Al, you have a phone call.” That’s impossible, nobody knows I’m even back on Marco. And he said, “Well this girl sounds hysterical.” So I answer the phone and my daughter Tiana says, “Dad, Reno’s chute didn’t open. He crashed.” And I said, “Oh my God, Tiana

he’s dead.” I literally felt all the blood in my body come out of me. I thought I was going to have a heart attack. It was the most horrific thing I think I have ever—I don’t even know how to describe it. But then I said, “Well, Tiana where is he now?” And she said that he was still in the medevac to Atlanta Medical. Well then his chute had to open because otherwise he’d be in a hearse. So I’m getting bits and pieces.

So what did happen exactly?

What had happened was he came in and in the last 60 feet he just free fell. And he crashed. I don’t think I’ve ever had anything worse than that.

He’s doing a lot better. The prayers and the overwhelming support from the people of Marco. I had people come up to me that I don’t even know that hugged me and said they were praying for me in church. It’s just unbelievable the amount of love and support. That’s the thing about Marco, it’s one big family here. Everybody looks out for each other. They didn’t give him a whole lot of chance, but he was in great shape. He’s got about a year recovery. He’s a miracle. It’s just a miracle. He’s 21 and he’s got a long road to recovery, but like

Al was a certified member of the Marco’s original Men’s Club, seen here.

I said, he’s going to make it.

You sort of seem like a person who always has their hands in a bunch of different things. I was wondering how you came to that, what’s your background?

I went to Florida State and graduated. I didn’t play college ball because I was a walk-on. I tried to walk-on and the coach, Bobby Bowden, kind of talked me out of it because I was putting myself through college and he thought I’d probably get hurt. I’d be on the practice squad. I also went to chef school to become a chef. I thought I was going to do restaurants so I at least would not be handicapped by not knowing what I was doing. One of my dear friends is Chef Bobby Flay. I’m also a realtor. I’m one of these people that just can’t really sit still.

What I did on Marco was I got here and I didn’t know what to do. So I started thinking, what does Marco need? So I opened Marco’s first deli, then the first sports bar, then Marco’s first hamburger joint and so on. What happened to me was that people just kept coming up to me wanting to buy these places from me. So I was like okay! I built like, 10 or 12 different restaurants on Marco.

Could you just give us a running 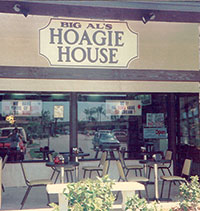 Photo at left, Al celebrating a birthday with his children Reno and Tiana.

list of the restaurants you created or were involved in?

Okay you got Big Al’s, the Sports Pub, Kahuna’s, Buckwheat’s, Palm Garden, Froots, Stonewalls, Bimini’s, Cocomo’s and the Islander. One of my favorites was Bimini’s. That one I built from the ground up. That was a cool restaurant. That just came about because I was in McDonald’s on a Friday night with my little kids, and I thought, God, it’s Friday night and I’m with my five-year-old and my two-year-old, talking to people like, I wish there was a place where you could just go in and there was a kids room and we could have a drink and relax. That’s how it all came about. That’s how Bimini’s started.

I never try to duplicate anything. Every concept I did was the first. I was always trying to think, what could I do to make the island a little better? And that’s become my motto. Hopefully whenever I leave or check out, I hope they say, he came in and he made the place a little better than what it was.

Tell me about your involvement with the boat parade.

We were all in the Yacht Club and me and the bartender Mr. Bill were talking. We were all talking and I was like “we’re going to go to Fort Lauderdale, where I grew up, and we were going to watch 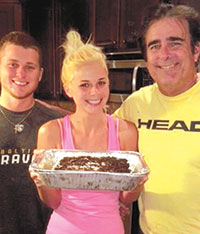 the boat parade.” There they have thousands of boats. Mr. Bill suggested we could do one here. And I go “hey, we should!” You know we had a few drinks in us. There were four boats and we went up and down the canals and people were throwing refreshments at us. That’s how the first one started. It was really funny. It was real impromptu, only four boats. Then the next year Gail Schultz from the chamber, she took it over and it’s been happening ever since.

What’s this I’ve heard about you and the band Queen?

After I got out of Florida State I ended up going to South America for a whole year. They were touring down there and I became real good friends with Roger, the drummer. It was great. I mean they were the biggest band at the time. I was down in Rio de Janeiro and I’m on an elevator and I hear English for the first time in like a month, because all I’ve heard is Portuguese. And I’m like, “Oh my God – English!” And they start laughing. Then I was like, “You look familiar to me,” and that’s how we all became friends.

So are you working on anything right now?

Yeah I am working on something right now. One more concept as we talk. I can’t sit still I got to do something.