An evening at the House of Mozart 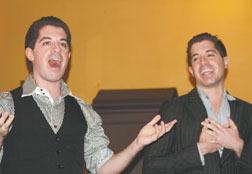 Anthony and Will performing. PHOTOS BY VAL SIMON/COASTAL BREEZE NEWS

Marco Island’s House of Mozart has long been known for its fine food, particularly its German/Austrian specialities. The restaurant, located in the “Big Publix” shopping center has a dedicated following for good reason. On February 3rd devotees of fine food and wonderful music were treated to a five course feast accompanied by Will and Anthony Nunziata, twin tenors. Alfred and Manuela, Mozart’s proprietors, hosted the two night show – sold out both nights – with audiences clamoring for more. We will be privileged to get more when the brothers squeeze March 11-15 into their crammed schedule.

In between courses the brothers sang everything from a rousing “Funiculi Funicula” to a moving “The Prayer”, dedicated to their beloved “Granny”. Born in New York City, the twins were educated at Boston College where they performed in some school productions before embarking on their joint professional musical career. The twins have been at it since their toddler days, and were fortunate enough to have the unfailing support of generations of a loving family. Grandfather Bill Wendell 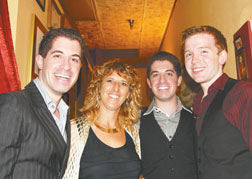 Will, Manuela, Anthony and Brad.

was an Emmy Award winning announcer who appeared with Ernie Kovacs and David Letterman, and was on “Truth or Consequences” as well as announcing for the famous Macy’s Thanksgiving Parade.

The heritage of a legion of superb Italian tenors shines through the twins’ performance. They’ve traveled the world singing their songs and spinning their yarns. They can be seen at Feinstein’s, a major Manhattan cabaret supper club in New York City.

When Will and Anthony sang “You’ll Never Walk Alone”, a classic from Rodgers and Hammerstein’s “Carousel”, several women in the audience were weeping, and “The Prayer” brought on more tears. But, it wasn’t all tears. “Get Happy”, “Happy Days Are Here Again” and “Make Someone Happy” were distinctly upbeat, and the synchronization between the twins was remarkable. They strolled among the diners, singing and bantering with a distinctive personal touch.

Interestingly, the twins sang several Stephen Sondheim songs. They had performed at Avery Fischer Hall in New York for Sondheim’s 80th birthday. Recently the Oak Room at the Algonquin Hotel in New York, closed after 32 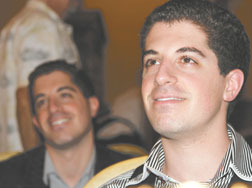 years featuring well known star performers. That leaves only Feinstein’s and Cafe Carlyle as the two cabaret supper clubs. Performances at the clubs were described in the New York Times as, “comparable in quality to classical music concerts and the best Broadway shows” and that Stephen Sondheim’s songs are cabaret staples. Mozart’s diners were clearly entranced by the tenors as virtually everyone in the audience was silently enjoying the performance (except the inevitable four who chattered incessantly!).

Brad Gardner, an extraordinary musician in his own right, accompanied the twins on the piano. As a youngster he was in love with the piano at first sight, and never lost that love. He taught himself to play without sheet music or training. He’s played on Broadway for musicals such as “Silence” (a parody on “Silence of the Lambs”) and “The Addams Family”. Brad graduated from Campbell University in North Carolina where he was on full scholarship. Brad’s dad, Kirk, is a full time Marco Island resident.

It was an evening of fine food and outstanding entertainment. Who could ask for anything more?