An Eagle Court of Honor for Ricky Grootveld 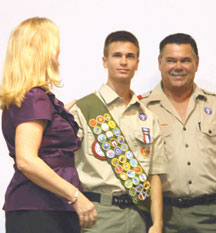 Ricky Grootveld is an exceptional young man. This statement was heard over and over during a ceremony in which Ricky received an Eagle Scout designation. Ricky has served the scouts for 11 years. Scout Master Emilio Robau and Commissioner Jim Chute, spoke about his accomplishments. An avid camper, backpacker and skier, Ricky also has a blackbelt in karate, percussion leader for the Lely High School Marching Band and was seen at the Veterans Day ceremony as a member of the JROTC carrying the POW flag. He’s one of the top 100 students in Lely High School.

To earn this honor, according to Gil Burley from the Boy Scouts of America Council, Ricky had to exhibit leadership skills and be counted worthy. He has to honor self and all fellow scouts. Through his Eagle promise, he pledges himself eternally to the values and principles of being an Eagle Scout and becoming a master of his own power.

Nancy Richie, Environmentalist for the City of Marco Island, spoke on behalf of Ricky’s dedication to community service: “I was contacted by Ricky about an Eagle Scout project he wanted to do. The project would benefit our natural environment, enhance aesthetics at our park, and educate generations to come about what makes our Island community and environment so special and beautiful. His project, an American Osprey nesting platform and a garden of native and exotic palms, was exactly what Mackle Park needed. When someone says “he’s an Eagle Scout,” it’s impressive and one knows to expect great things!”

Parents are an integral part of the heartfelt ceremony, each being pinned by their son. Ricky’s father is also Scout Master. Led by example, becoming an Eagle Scout was a natural progression for Ricky, although the requirements are nonetheless stringent and demanding. Ricky’s Eagle Scout pledge commits him to helping other scouts along their journey. Many younger scouts from Marco Island Scout Troop 234 were in attendance. The ceremony concluded with Ricky thanking his parents, Scout Masters, Bryan Milk from the City of Marco Island, Lowe’s Home Improvement and Nancy Richie for all of their help and support.