An artist’s life for Judy 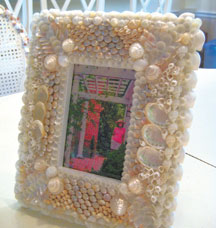 This intricate picture frame is reminiscent of a “Sailor’s Valentine.”

The Deepwater Horizon oil spill of 2010 brought national attention to the dangers of offshore drilling. Anyone living along the shores of the Gulf of Mexico felt the negative impact of the disaster. As much as the oil spill interrupted the livelihoods of those in the area, it will forever affect our area’s natural ecosystem. Goodland resident, Judy Wittwer, is more than aware of the harmful results of this man-made disaster. Yet, through the devastation she was able to find inspiration.

When Judy moved to Marco Island in 1985 with her two young daughters, a favorite activity for the family became beach combing. They would collect shells, horseshoe crabs, driftwood, sponges and so on. An artist all her life, Judy was able to imagine creative designs with the pieces of nature the three had collected. She began embellishing baskets and wreaths with her beach finds. She won awards for her work through the Shell Club of Marco Island and sold her products at the Marriott and the Ritz Carlton. She also marketed her products through local craft fairs. 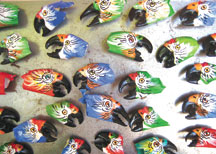 Judy has found away to turn the stone crab, a symbol of a Goodland community, into a functional piece of art.

her crafts. “I always loved the feel of the community. After the bazaar I would drive the girls through Goodland to see all the Christmas lights. It always looked so magical.” The “old Florida” feel and the animal-friendly atmosphere were other factors that led the long-time animal lover to move to Goodland in 1994.

Once living in Goodland, Wittwer found part-time work at The Little Bar Restaurant in addition to working with her shells. Soon, however, she became interested in another form of art. “I was on vacation and saw a beautiful arched doorway that was faux finished and I thought to myself, ‘I have to learn how to do that.’” She originally taught herself the technique but later went on to become professionally trained. She started her company Judy, Judy, Judy, Inc. twelve years ago and dove into the world of faux finishing.

Along with working two jobs she found time to work with For the Love of Cats, a non-profit organization working to save the feral cats in the area. She also volunteered with the Goodland Scholarship Fund, adopted two greyhounds from the Naples Racetrack and raised her daughters into 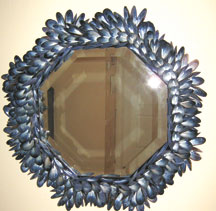 Recycled mussel shells turn an ordinary mirror into a work of art.

It seemed, unfortunately, that the only thing she did not have time for was her shelling and shell art. Not until the Gulf oil spill did Judy remember just how much she missed her favorite old pastime. “I realized how delicate our ecosystem is and that disasters like this will continue to happen. One day we won’t have these beautiful shells on our beaches. I wanted to find a new way to begin using shells in artwork.”

She once again began shelling and used what she found to embellish furniture, picture frames, mirrors and lamps. Many of her shells must be purchased, unfortunately, as the decline in shells along the beaches has become evident even prior to the spill.

She has, however, found clever ways to recycle shells that would normally become garbage. As an employee at the Little Bar Restaurant, Judy collects the leftover mussel shells and stone crab claws to use in her artwork. “Once the mussel shells are cleaned they give off bright hues of blues and purples that look beautiful when arranged on a mirror or frame,” she adds. One of her mussel shell mirrors is

currently on display at The Little Bar.

Judy’s imaginative eye has also turned what would be a throw-away stone crab claw into brightly hand-painted parrot heads that also conveniently serve as magnets. These items are so popular among the Goodland community, a stone-crabbing village, that she sold out her whole collection in only two days at the most recent Goodland Christmas Bazaar.

This is not the first time the community has rallied behind Judy’s creations. Two years ago she designed a Goodland-themed t-shirt to sell outside of Stan’s on Sundays. The residents of Goodland loved them so much they were all sold after her first day.

Judy’s many forms of artwork can be seen at Shells by Emily on Marco Island and at The Old Marco Lodge Restaurant in Goodland. She also sells her work on etsy.com under Seaside Offerings. To learn more about her many skills, Judy may be reached at 239-642-1676 or judy wittwer@yahoo.com