AN AMERICAN DREAM ON MARCO 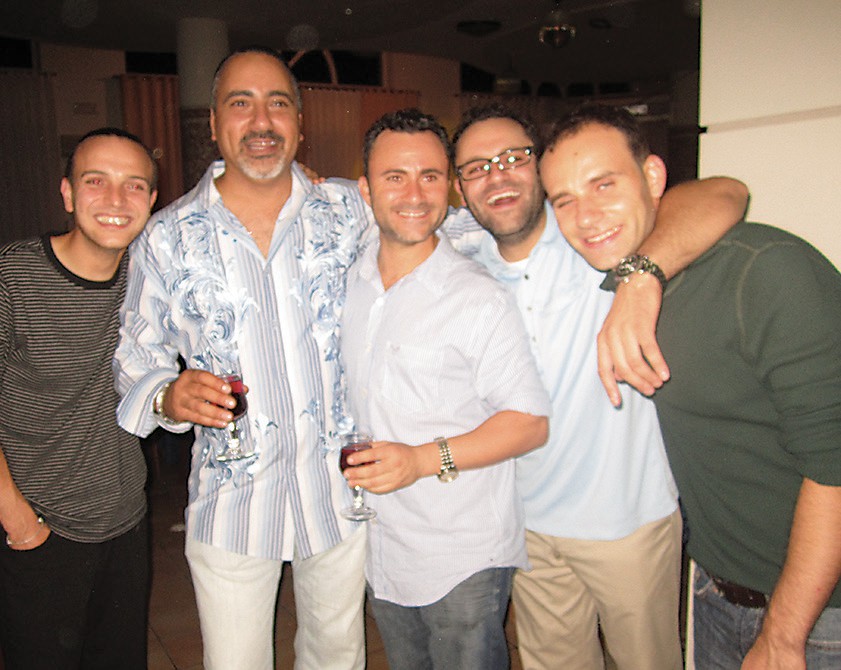 s a boy growing up in Italy, Luigi

Carvelli never dreamed that by the age of thirty-five he would be the owner of four successful restaurants, with nearly three hundred people in his employ.

Luigi, along with his brothers Sal, 44, and Francesco, 33, and cousins Adamo, 41, and Francesco Serravalle, 34, are the owners of three of Marco’s finest restaurants, DaVinci’s, Marco Prime Steak & Seafood, and the newest addition, The Oyster Society (sans Sal). A fourth restaurant, DaVinci’s of Boca, in Boca Raton, Florida, opened in 2014.

This success story begins a continent away. Luigi was born in Calabria, Italy, where he lived with his parents Salvatore and Elisa. Calabria is located in southern Italy, what is described as the “toe” of the bootshaped 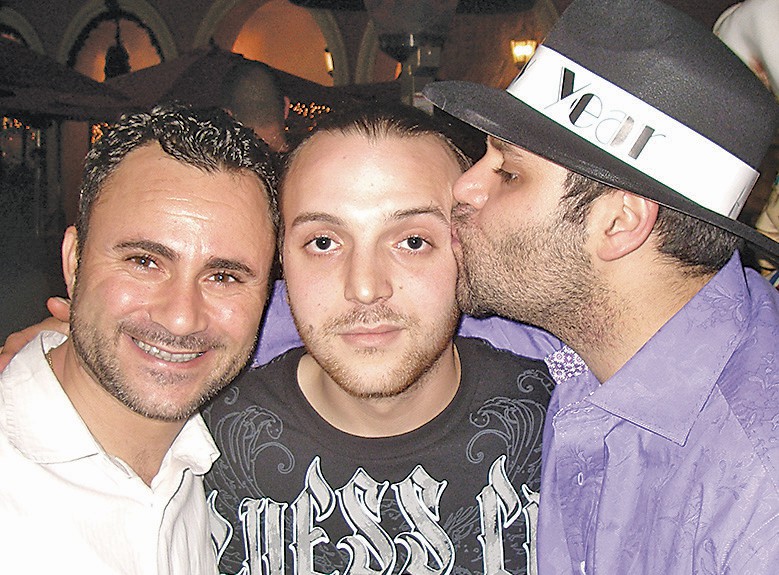 country. A beautiful mountainous region, Luigi describes picking wild mushrooms as a kid with his cousins and brothers.

The family lived humbly on a teacher’s salary. He grew up owning only two pairs of shoes and knowing what tough times were before even becoming an adult. Luigi said his childhood experiences helped him “to understand the value of a dollar.”

At age 16 Luigi came to the United States to make his own way in the world. He attended school and lived with his brother Sal and cousin Adamo. He worked hard and earned a business degree with a minor in management from Hodges University in Naples. By the time he was 21 years old he had purchased his first apartment. 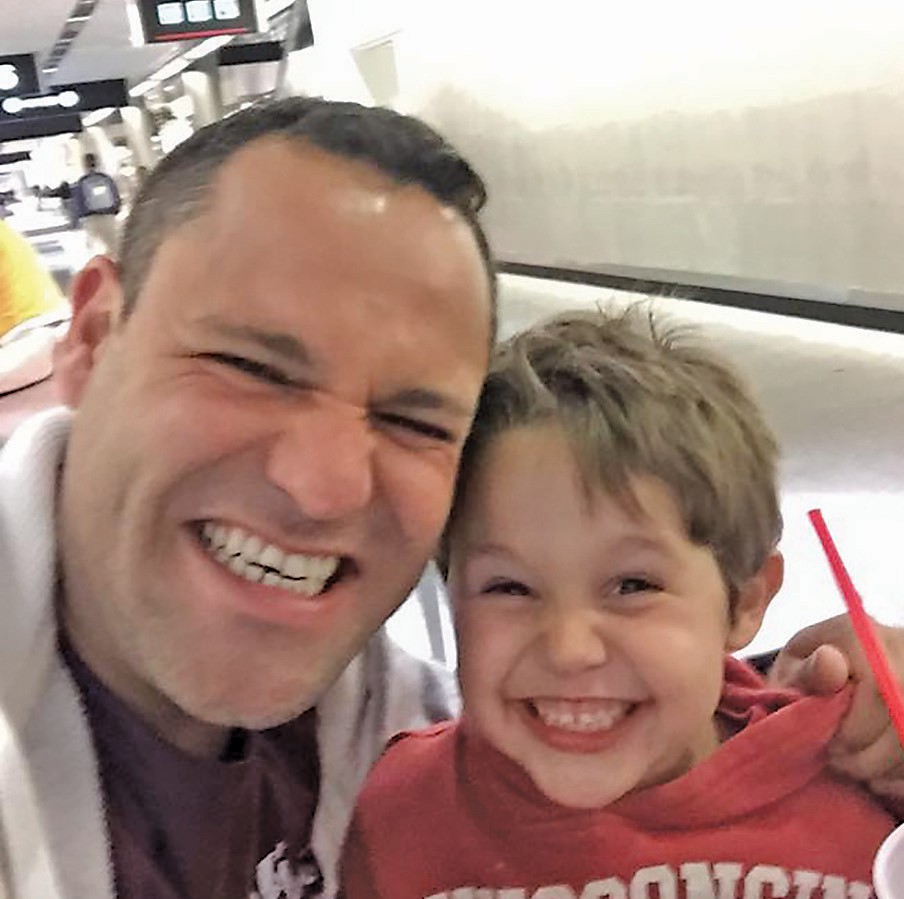 Luigi with his son, Nico.

the first Da- Vinci’s, a very small restaurant with only 10 tables. It took ten years to get the 150 seats required for a liquor license. In 2006 “things really started happening” he tells us. They built a beautiful, larger restaurant, revamped the menu, and introduced a wood-burning oven.

In 2008 Luigi went to Wisconsin and opened a second restaurant in Wisconsin Dells, known as the “Waterpark Capital of the World.” It was fate, as there he met his future wife Megan. He worked hard, shifting his residence to work in both restaurants, Marco during the winter and Wisconsin during the summer. In 2011 he sold the Wisconsin restaurant and returned to life full time on Marco. 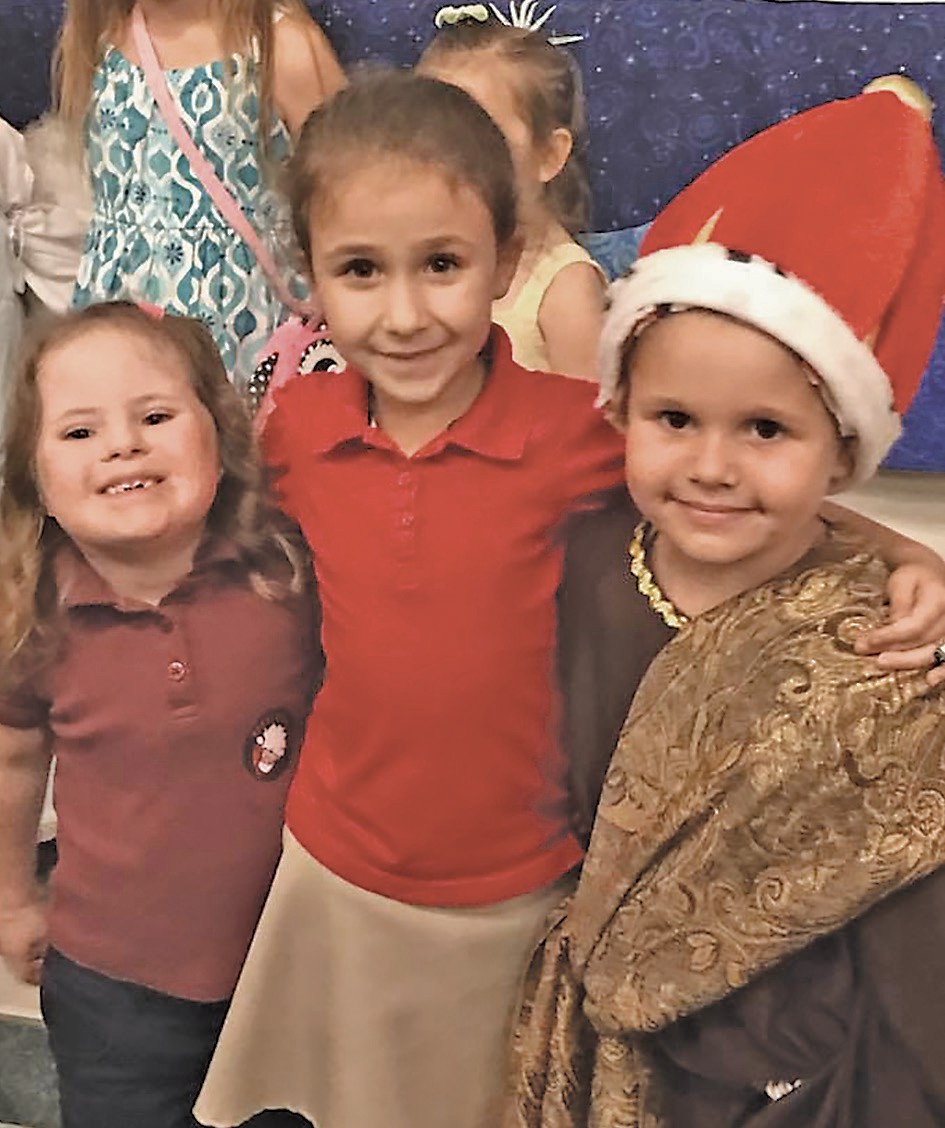 The next generation, from left: Sasha and Alessia Serravalle and Nico Carvelli.

and Seafood, a success from day one despite the risky menu. Not a traditional American steakhouse, the innovative menu draws international influences from Asia, Italy and France. “We didn’t know what to expect,” Luigi says. Not knowing what the response would be, they carefully prepared two complete menus for the brand-new restaurant. Menu A included the more modern, unconventional offerings. Menu B followed in the lines of a traditional meat and potatoes steakhouse. As luck would have it, they never had to use Menu B.

The family has been busy. In 2014 Da- Vinci’s of Boca in Boca Raton was built. And in December 2016 The Oyster Society had its grand opening on Marco Island. This innovative restaurant has the feel of a 1920’s 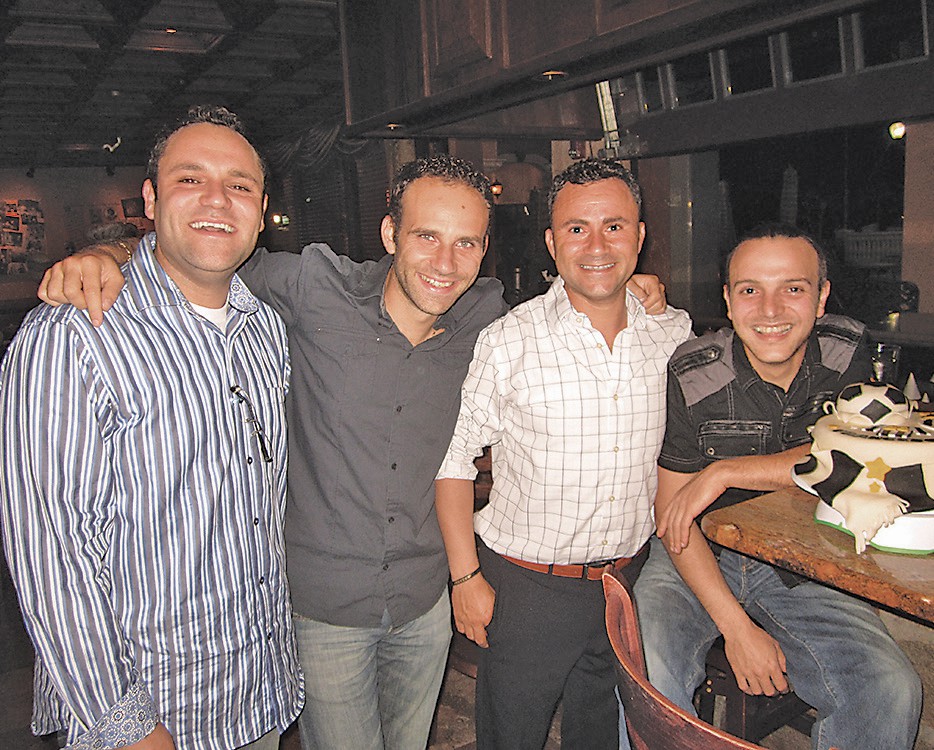 speakeasy. The restaurant already has developed its reputation for serving the highest quality local seafood, craft cocktails and shellfish.

In addition to unbridled drive, hard work and talent, an element of fate or serendipity is also woven into the family’s success story. Somehow, although each of the five family member/business partners left Italy at different times, they all wound up here, on Marco Island, to come together and create a dining empire. Each possesses a unique talent that contributes to the success of the restaurants.

Luigi is the president, using his knowledge and background in business and management. His wife Megan is the interior designer who gives each restaurant its own special style. 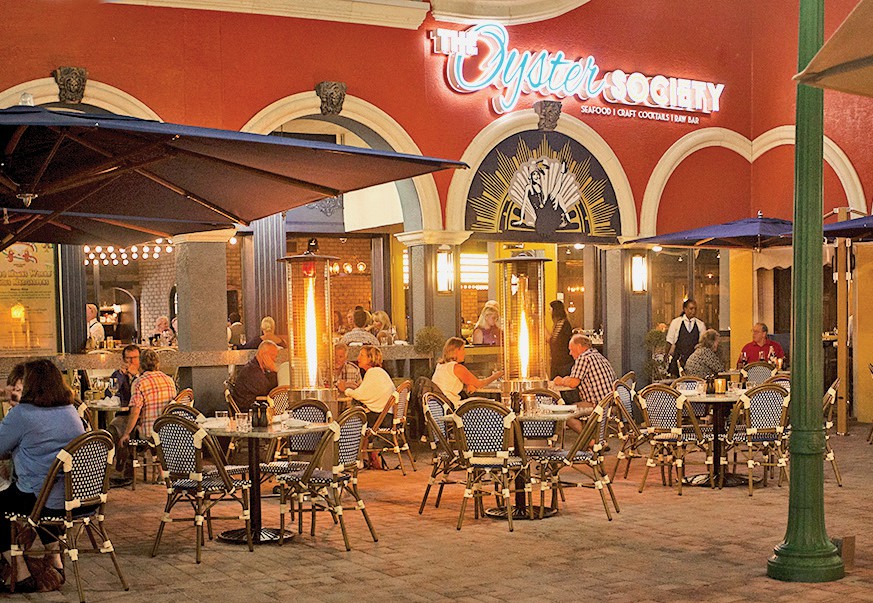 The Oyster Society is the newest addition to the Carvelli family’s restaurant lineup, which includes DaVinci’s (in Marco and Boca Raton) and Marco Prime Steak and Seafood.

He is the force behind the creative menu offerings at each location. Francesco C.’s wife Karen is a graphic designer who designs advertisements and is in charge of the websites.

Adamo Serravalle is the vice president and the wine sommelier. Julia, Adamo’s wife, is a professional photographer with an artistic eye. Her photos are used in the advertisements and websites for the restaurants.

Francesco Serravalle (“Francesco S.”) is the liquor director, overseeing all liquor purchases and the bars.

Luigi told us that even though their employees are not related by blood they are still like family to the Carvellis and Serravalles. Turnover is extremely low he says, with employees staying for years and moving up the ranks. In fact, the chef at DaVinci’s has been 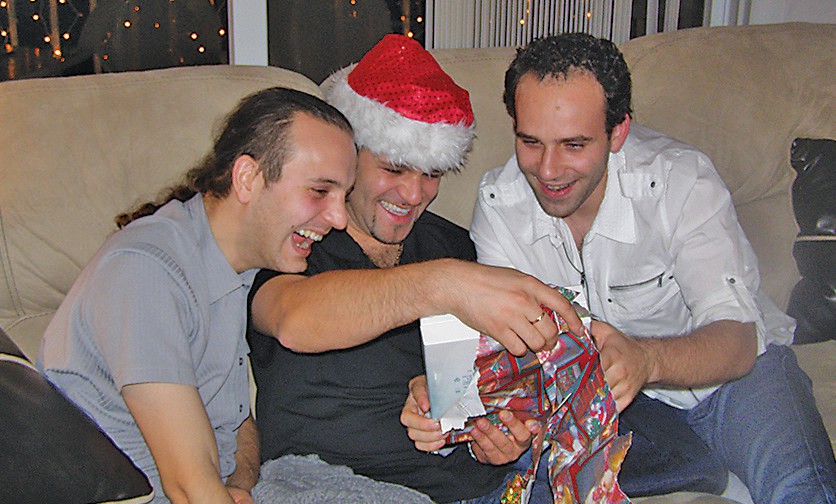 Christmas with the family. Luigi opens a gift as Francesco C. (left) and Francesco S. look on.

with the restaurant since day one. Every Thanksgiving and Christmas for one day the restaurants are all closed. On this special day the owners cook and serve the employees. The employees are told that if they are without friends or family to spend their holidays, they are welcome at the Carvelli table. Each year there is a place or two set for an employee who would otherwise have spent the day alone.

From the beginning, Luigi worked seven days a week, something he continues to this day. The strong work ethic and drive to be the best has not diminished with his success, if anything, it has been fueled by it. No detail is spared. Each restaurant is the top of the line- in 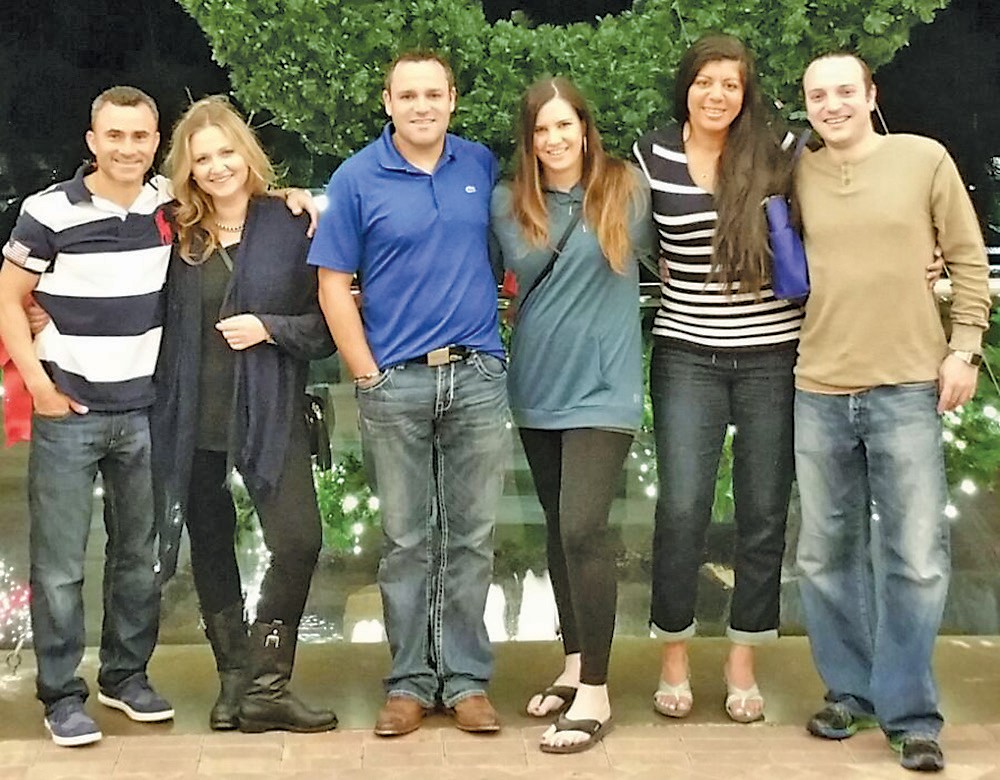 Couples at Christmas, from left: Adamo and Julia, Luigi and Megan, and Karen and Francesco Carvelli.

food quality and innovation, in specialty drinks, in the extensive wine list and in the décor and ambiance. “Each restaurant we own has our heart and soul in it,” he says.

When asked whether his son Nico, age 5½, will continue in the family business, Luigi says, “If he wants to do it, it will be great.” Nico is already comfortable in the kitchen, and enjoys making his own pizzas. Adamo and Julya’s daughters, Alessia, 8, and Sasha, 7, also enjoy helping out in the kitchen. The children, like the adults, are doing what they love. “When you love what you do, it shows,” says Luigi.

Lucky for Marco Islanders, it looks like this family business, which is truly a passion, will continue to provide memorable dining experiences for generations to come.