An American Caddie in St. Andrews: Growing Up, Girls and Looping on the Old Course 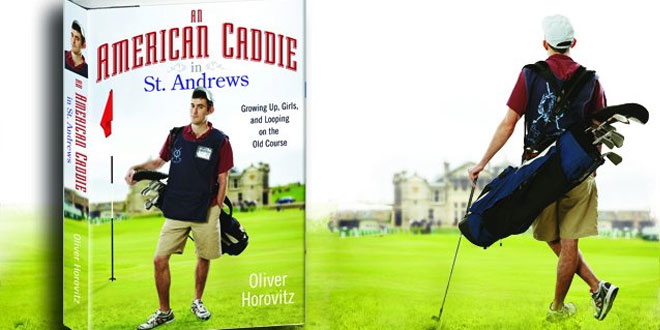 How I came to read a book about being a Caddie in St. Andrews Golf Course in Scotland is strange to say the least. The closest I have ever come to playing golf is the summer my husband and I, newly wed, spent in Springfield, Missouri where he was interning as an accountant with Kraft Foods. Since we were only there for a couple of months and knew no one I slept late, watched TV and read. In the evenings and weekends one of the few things we could afford to do was play a round or two of miniature golf and I was terrible at even that level. The only other contact I have had with the sport is watching the Masters in Augusta and I mainly do that because the spring flowers are absolutely gorgeous on my widescreen, HDTV. I guess you might say I had a slight interest in the book itself due to the fact that while touring Scotland I did step foot on St. Andrews Golf Course. It was not terribly attractive and without a doubt was one of the windiest places I had ever been in. How anyone can compensate for that wind while hitting a ball down the straightway is beyond my comprehension. I did know the 600 year old course was the one any avid player dreams of playing on at least once in a lifetime so I tried to appreciate it for that fact alone.

Several years ago the author, young Oliver Horowitz, applied to Harvard College and was accepted with the only glitch being that they had a full class for that year and he could not attend until the following year. His first thoughts were of total confusion as to what he might do to fill that year but on further thought he realized that the perfect solution was to spend that year at the University of St. Andrews, to which he had also applied. He had spent many summers playing golf at St. Andrews while visiting his uncle so he was pretty sure he would enjoy it. Harvard agreed to his doing this as long as he did not ask for course credit to be transferred. So off he went to Scotland to spend a delightful year as a student in the very school Prince William was attending and enjoying all that being a man of that age might expect to enjoy as a college student. To add to that enjoyment he was allowed to play on any one of St. Andrews six golf courses and, being an avid golfer, he took advantage of that privilege almost every day. In the evening he took to sampling any number of the city’s 31 pubs. He was not alone in his hi-jinks. On May 1st each year the whole student body of 7,000 students takes part in the traditional “May Dip” which involves staying up all night partying and at 5 a.m. running into the North Sea stark naked.

Too soon summer was approaching and, once again, he had to consider what next he should do before heading to Harvard. The obvious choice was to become a caddie at the St. Andrews Golf Course. Even those well seasoned as a caddie at other golf courses must take part in a training program at this esteemed course. One is not welcomed with open arms by the other caddies and the work can be grueling. A fully loaded golf bag is not a light weight item to carry around the course even once, let alone twice, which is something often aspired to as the pay is about $100 a round, plus tip. And there is a great deal more to the job than just carrying the bag. A good caddie must learn the course, literally, like the back of his hand. He must know how a ball is likely to roll over each little hill and valley on the course and share this knowledge with his golfer. He must know which club to use on each hole and be ready to hand it to the person who expects him to know what in heck he is talking about. And he must be prepared to suffer the wrath of those who are inept golfers and blame him for their lousy shot. However, if he is good at his job he will find the day will come when they call his name to caddie for men or women whose names he has only heard spoken of in awe by other golfers. And on that day it will be worth all the sweat and tears he has put in preparing for that magical moment.

I thoroughly enjoyed every minute of this book. I learned a lot about the game of golf and at the same time got a real chuckle out of hearing what goes on behind the scenes in the caddie shack. Whether you are a golfer or not I think you will too.

Diane Bostick has lived on Marco Island since 1987.  She was the Founder and President of Ft. Myers chapter of the Association of Children with Learning Disabilities, President of Jr. Welfare League, Ft. Myers Chapter, and served on the board of Art League of Marco Island. She is an avid reader, fly fisherwoman, tennis player and crafter.