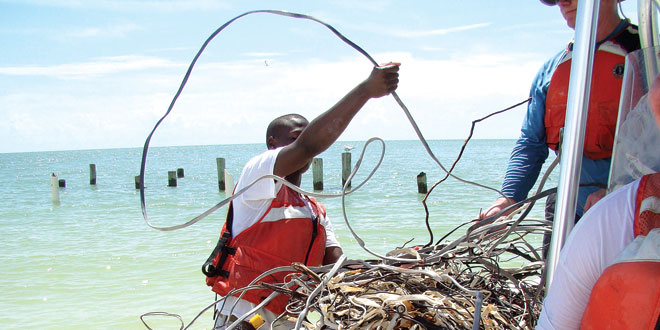 Everyone deserves a second chance; a fresh start; a clean slate. At AMIKids Big Cypress, at-risk male youths are offered just that. Teens are sent to the program for anywhere from six months to a year depending on their juvenile criminal history. Rather than treating these boys as criminals, they are shown love and compassion and are given the chance to learn real world skills and how to be a part of a team. The program turns boys into young men. On January 10, two of these young men graduated from the program. The ceremony was a combination of a celebration of their accomplishments and a thank you to the volunteers, teachers, community leaders and organizations who have given these boys a second chance.The graduation was held in the cafeteria at the AMIKids Big Cypress camp site located far off the beaten path in Ochopee. Upon arrival, it looks like a regular summer camp – a counselor’s office, two dorm units, a separate building for classrooms and a cafeteria encircle a field with a couple of picnic tables and a newly-refurbished sand volleyball court. The boys wear t-shirts or sweatshirts with “Swamp Boys” – a term of endearment – splashed 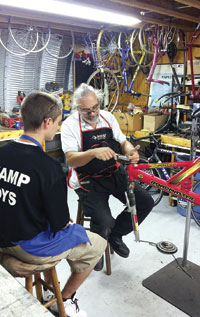 The Swamp Boys learn how to refurbish bikes from the experts. A total of 50 bikes were donated to Manatee and Everglades City Schools in the past few months. SUBMITTED PHOTO

“We train these kids how to go back into the world, not lock them up and treat them like convicts.” Executive Director Ron Boyce believes that success lies in building positive relationships with the boys who enter Big Cypress. “Treat them with love, show them good values and they will want to model themselves after that principle.”

AMIKids Big Cypress has been around since 1996, but the AMIKids program, which is now in eight states, began in 1969 in Fort Lauderdale. The non-profit organization contracts with the Department of Juvenile Justice, allowing certain boys to come to camps such as Big Cypress rather than juvenile detention centers. The Big Cypress program is run by a Board of Directors, many of which reside in Naples and volunteer their time with the Swamp Boys.

Many of the board members were present at the graduation, along with representatives from the Collier County Sheriff’s Department, Everglades National Park, Manatee Elementary School, Everglades City School and the League Club of Naples. Dr. Cynthia Jansen, Principle of Alternative Schools in Collier County and State Representative Kathleen Passidomo also spoke at the graduation.

While two Swamp Boys returned to their homes after the January 10 ceremony, there is not necessarily 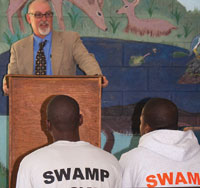 a set date of graduation for boys at AMIKids Big Cypress. A recommended time period, typically between six months and a year, is set by a judge, but the boys’ behaviors and improvements are what allow them to graduate and go home to their families.

The two celebrated graduates were Jose and Jeremy, who each spent six months in the program. “You gave us your babies and trusted us with them,” Boyce said to the boys’ families. “We treated them like they were our own and because of your support they got through it. And look at the difference. They interact and speak like grown men.”

One hundred percent of the boys that come to Big Cypress have a prior offense on their record. The average age of their first offense is 13 and the average number of arrests is 12. “The amazing thing is that we’re still effective,” adds Boyce as he considers how over the years, the boys coming into the program are having longer rap sheets and more violence-related arrests.

Through schooling, discipline, counseling and programs that build self-esteem, boys on their way to becoming hardened criminals are given a chance to start over. Under the watchful eye of Boyce, a former 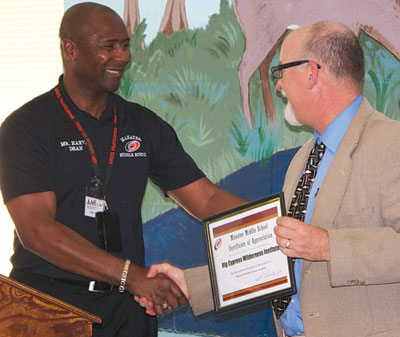 George Harvey of Manatee Schoolsthanks the Swamp Boys for the 30 bikes donated to children of the school. PHOTO BY NATALIE STROM

marine who has been with AMI Kids since 1988 and the Big Cypress program since December 2011, boys learn to build bikes for tykes, visit with retirees at Bentley Village in Naples, have built an organic garden for cancer patients at North Naples Hospital and learn many other useful life skills. Over the past year, these projects have grown thanks to donations from individuals, churches and a generous $20,000 from the League Club of Naples.

“When I first took this job, there were so many things we needed to do. We methodically hit things one by one,” explained Boyce at the graduation. One of the first things to overhaul was the bike program. Through donations, a bike shop was built on site leading to the refurbishment of 50 bikes. Thirty were donated to children of Manatee Elementary School in Naples and 20 to Everglades City School children.

“If you could only see the faces of our students who received the 20 bikes. Many of them have never had one before. Thank you.” stated Principal Sparrow of Everglades City School to the Swamp Boys during the ceremony. George Harvey, Dean of Students at Manatee expressed similar thanks.

The Swamp Boys are currently building an organic garden 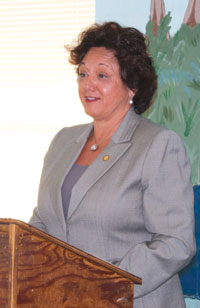 Representative Kathleen Passidomo spoke to the Swamp Boys at the graduation offering those leaving the programand those still enrolled “15 Lessons to Live By.” PHOTO BY NATALIE STROM

and greenhouse on the premises in Big Cypress to provide more vegetables to cancer patients at North Naples Hospital and six of them recently completed a Chef’s Training Course. They enjoyed the holidays at Bentley Village, decorating the common area with the residents, and Pastor Robert Sims of Faith Apostolic Church has been making a weekly trip to Big Cypress to minister to those interested.

Special trips such as scuba diving, swimming, canoeing, boating and fishing are reserved for the Swamp Boys depending on behavior.

Through these programs, the Swamp Boys are “learning to take responsibility for their actions,” stated Program Manager Anthony Bowens at the graduation. “They are here with all walks of life but are learning to deal with others and with consequences – good and bad.”

“When they come to Big Cypress, each one of these kids has the chance to learn how to change his choices which changes his life and changes his family life,” adds Boyce.

It seems that recent graduate Jeremy would agree. “It feels exciting to go back into my community. Six months is a long time but it’s nothing compared to what could have happened to me because of the trouble I’ve been in. But here, I got to start a new life.”