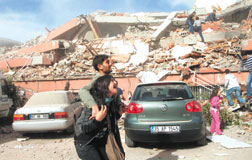 I received anxious email messages and telephone calls from many of my friends, as well as a number of readers of this newspaper last week, wondering if any members of my family in Turkey were affected by the earthquake which devastated a city in Eastern Turkey. Some emails came from people I have never met. This was so very American and so very heartwarming to say the least. The only thing some of these emailers knew about me was the fact that I was born and raised in Turkey until I decided to come to America and become a citizen and start my own family here. I responded to each and every email personally and let them know how much I appreciated the fact that they cared. At the Thursday noon Rotary Club meeting I was even asked if the Rotary could get involved in any relief efforts. Once again these requests were made by some very unique individuals whose one only goal was to make me feel comfortable in the fact that I had friends here who were always ready to help.

Amongst all of these emails, I also received one from a very long time friend of mine who lives in Naples, but spends a portion of his summers in Turkey. He and I are graduates of Robert College of Istanbul and we have been good friends despite the fact that he attended RC approximately 14 years before I did. The subject of his email was quite depressing. He indicated that he received an email from a classmate of his on the subject of whom or what caused this earthquake which devastated a town and killed many people. My friend was shocked when he read the contents of this email, coming from a person who studied at the same American institution which we both studied in and prided ourselves with the modern knowledge and education we received

from teachers and professors who were brought in to teach us, because they were the best of the best America could offer at the time.

The email in question indicated that Kremlin’s Black Sea fleet reported that, in order to stop the Turkish Military’s entry into Northern Iraq while chasing Kurdish Terrorists belonging to PKK (Kurdistan Liberation Army); USA had used their most “secret weapon” to create an earthquake in the region. According to this so called “secret report” Russian stations in the area monitored a significant increase in temperatures in the ionosphere within 36 hours of the earthquake which reached a “peak” within hours of the event. Russians further reported that the unusually fast heating of the ionosphere was caused by the “secret earthquake creating weapons” which USA possess all around the world, controlled by scientists in HAARP stations located in Alaska! The report also indicated that the same weapons were used against Japan during this year’s disastrous earthquake and Tsunami; although it was not indicated why America would use such a weapon against Japan. Russian Admirals in the area were reportedly indicating with certainty that America was against Turks chasing Kurdish Terrorists into their camps in Northern Iraq after the Turkish army barracks were attacked which resulted in the deaths of 26 Turkish soldiers and officers. This magnificent “secret report” could not have been complete without an attack on Israel and Jews; so it went on to say that “The US Government is very concerned about reports which indicated Turkish Army’s growing concern over the fact that Israel is actually housing and training PKK terrorist forces within the territories of Israel”. And the secret report ended with the most original warning of all; that all this was a part and parcel of the Great American Master Plan to control the world.

To the average reader, this may all sound like a “fantasy” or the plot of some cheap science fiction

HAARP, how it works.

movie. But not to the person who emailed it to my friend and not to the nearly a million people in Turkey who read and commented on the report. I will not pass on any more of the worthless accusations in the report; however I want to continue by posing the questions my friend asked me and hope some of you will take a moment to respond to me with your possible answers.

My friend wrote “What are they thinking? What makes people think this way about America? Where did America fail to make them think this way? And he concludes by saying “this has to be the ultimate science fiction plot even a Hollywood producer could not have imagined!”

My simple answers to my dear friend may not have satisfied him and they may not satisfy all; only because I think there may be some amongst us (I certainly hope not!) who read and believe these stories and blame America for everything. The readers may have noticed by now, after thirty some articles I contributed this wonderful newspaper that “I can’t take it anymore! I won’t take it anymore!”

What are they thinking? They are not thinking at all. Had they been thinking, they would have gotten on the internet and searched for HAARP* and figured out for themselves that there are no “secret earthquake causing weapons in the American arsenal.” These people probably have no idea that our government officials at the highest levels were unable to keep track of 1800 automatic weapons sold to Mexican drug runners under a “brilliant secret program” which ended up killing our own Border Patrol officers; let alone using “secret earthquake weapons” to hold the Turks back from chasing PKK terrorists.

What makes people think this way about America? These people are full of hatred and jealousy of the success of this young democratic nation. They know that they are to be blamed for their 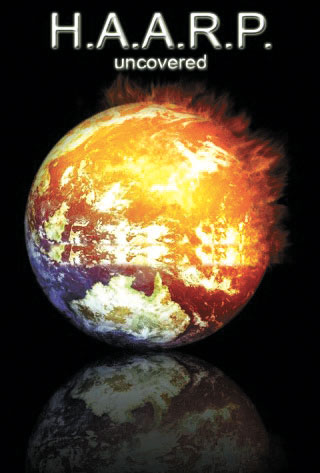 failures but would rather use America as their scapegoat.

Where did America fail to make them think this way? America did not fail anywhere to make them think this way. America lost the propaganda war waged against her by all our combined enemies. While we were spending blood and treasure saving these people from tyranny; our enemies were busy feeding them “secret earthquake causing weapons” baloney. While we were busy sending aid to the suffering peoples of the world; the tyrants were busy filling their pockets, living in palaces and bad mouthing America. While we were carrying bottles of clean water to areas of the world completely forgotten and given up by vicious dictators; they were busy telling their people why they should not trust the Americans because the water they bring may contain secret chemicals to turn them into Christians.

It goes on and on and I can’t take it anymore. The time has come and almost passed when we as a nation should stop and think about our own priorities, who we are and where we want to be. Every aid request must be examined carefully and our decisions to give aid must be made based on our culture and our priorities. Let us stop feeding dictators and tyrants who turn against us to make sure they can last in perpetuity and become our worst enemies. Bin Laden, Saddam, Khadafy, Mubarak, Chavez and Assad should be examples of people whom we should never deal with. Someday (soon I hope) when we figure all this out, my friend will no longer have to ask me those serious questions and as Americans we shall have all the correct answers.

*HAARP is a scientific endeavor aimed at studying the properties and behavior of the ionosphere, with particular emphasis on being able to understand and use it to enhance communications and surveillance systems for both civilian and defense purposes.