If you’ve read “American Sniper” don’t avoid the movie; it’s much different in several ways. The book concentrates on the elements of war in Iraq. The movie emphasizes the character and travails of Navy Seal Chris Kyle, who served four tours in Iraq protecting Marines in savage fighting. It’s anything but a “war movie”; indeed it qualifies more as an anti-war movie, much as the first 15 minutes of “Saving Private Ryan.”

The story follows Kyle, superbly played by Bradley Cooper, as he transitions from a laid back Texas guy to a husband, father, warrior and veteran attempting to help others returning from the depths of Iraq. Cooper gained 35 pounds of muscle for the role, and he is completely convincing as the hero (“The Legend”) in Iraq and the troubled veteran. It is much more a character study than just a combat movie, although there is sufficient attention to Iraq to show an 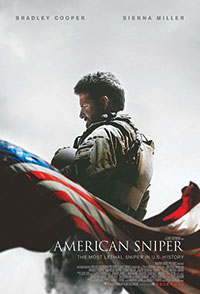 audience what it must be like fighting a non-traditional war. Clint Eastwood did a masterful job in directing the film and tying together the elements of character and combat more than has probably been accomplished in any other film.

In the course of the story Kyle, as a sniper, has to decide whether to shoot a young boy, a mother and other shadowy figures. Ultimately, he comes upon the enemy crack shot, Mustafa, and has to fire from the distance of more than a mile — not the traditional Western movie version of face-to-face.

At home, between tours, and after he leaves the military, Kyle has to deal with the adjustment to civilian life in Texas. He is as much a hero in helping others to adjust as he was as a Seal. The adjustment is difficult in the extreme.

Eastwood and Cooper have teamed together to produce a “must see” movie. Regardless of any awards it may or may not receive, this is a film for all Americans.