Alligators in the Everglades 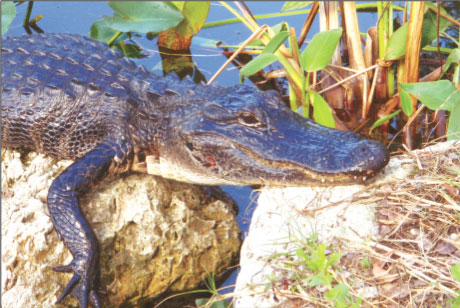 BUZZ FROM THE SWAMP By Patricia Huff

Living in the Everglades we’re used to seeing alligators in our rivers, canals and back bays. Occasionally, we see them up close and personal. On August 31 one of our special ladies, Margaret Webb, was severely injured by an alligator that attacked her in her front yard. Fortunately, someone saw the attack and was able to assist Margaret before emergency services arrived. She sustained several bites, and a portion of her leg had to be amputated after she was airlifted to Lee Memorial Hospital in Ft. Myers. Margaret, age 90, is well-known among the locals and full of life with lots of stories to tell about our area. Every year we celebrate our “Diamonds” of the Everglades (ladies over 70 years of age) with a luncheon at the Seafood Depot, and Margaret is always there. She’s a strong woman, and we wish her the best with her recovery.

Last year a local family lost their dog when an alligator pulled him from a dock into the water at high tide. Living with our wildlife in the Everglades is the same as in other parts of the country where people have moved into their habitat. We are aware of the dangers, and precautions are taken. Florida Fish and Wildlife Conservation Commission (FWC) offers “A Guide to Living with Alligators”, just as the Alaska Department of Fish and Game issues information on “Living with Bears”; other states provide similar information on their wildlife.

American alligator is federally protected, but there are state-approved management and control programs. Florida Fish and Wildlife has adopted such a program for population control of our alligators which can be legally taken only by those who have the proper licenses and permits. There is also the Statewide Nuisance Alligator Program that “strives to reduce the threat from alligators to people and their property in developed areas, while conserving alligators in areas where alligators naturally occur.” Well, we live in the Everglades so they do “naturally occur” here. In general, an alligator four feet and under is not considered to be dangerous.

The average size of the “nuisance” alligators that were caught between 1977 and 2009 was 7 feet. Female alligators usually grow up to 9 feet and males much larger (Florida’s record is a 14’3.5”). If an alligator is reported to be a threat, a trapper is called who will capture and kill the alligator (they are not relocated). According to FWC, there were only six incidents of alligator bites to humans in the State of Florida in 2010, compared to 19 in 2009 and 26 recorded in 2000. Whenever an aggressive alligator is seen, Fish and Wildlife should be contacted at their Nuisance Alligator Hotline: 1-866-FWC-GATOR (392-4286).

To learn more about the American alligator or to download any of their brochures, visit the Florida Fish and Wildlife’s website at www.myfwc.com/wildlifehabitats/managed/alligator

For more information about the Everglades area, visit www.evergladesmulletrapper.com

Patricia Huff has lived in Everglades City for the past 16 years and is the Publisher of the local newspaper The Mullet Rapper.