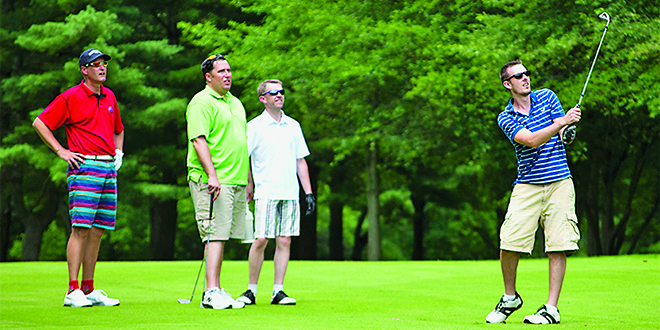 Submitted Photo | Golfers overvalue how important skill level is to being compatible with others in a social round of golf. Many other factors come into play that are more important, like being friendly and keeping a brisk pace of play.

In my experience there are three situations in a golfer’s life that result in the most anxiety about playing golf, particularly at private clubs. Hopefully this article will bring to light some of the most common concerns, which usually center on: Beginning to play golf with other golfers while learning the game; becoming good enough to contemplate playing in club events; and trying to find golf games with other members after first joining a club. I find that many misconceptions are made by those who find themselves in an unfamiliar situation at a club, and I hope to share the truths based on my vantage point and personal experiences.

Let’s take the first situation among the concerns that bring anxiety to beginners who want to play golf with others. In general, these golfers may have taken a few lessons, played with a spouse in the late afternoon, and ultimately find themselves at a point where they have been seen around the golf course by their friends, and the friends are inquiring about playing golf with them. These golfers are still worried about their skills when they are first invited to play a round of golf. But in most cases, friends are just excited to see that others are getting into golf, and want them to enjoy the game so they can have a common hobby, or maybe they just want to support their desire to play. Beginners, though, should keep in mind that there are only three major keys for them to follow for guidance as they learn the game–know when to pick up on a hole; have a reasonable knowledge on what each club’s purpose is; and know where to stand, for safety’s sake, when others are hitting. When I am helping a beginner these are concepts I teach along with how to grip the club, and how to aim the club face at address.

If a friend asks a beginning golfer to play and the beginner is still trying to hit shot number 24 on a hole, it will not be enjoyable for the friend. What would be best is if the beginner whiffs the ball, then hits it five feet on the next swing, the thing to do is to pick up and drop to hit the next shot from wherever the friend’s ball is to reduce feelings of frustration. Friends realize they need patience and that it is going to be a slow day. However, we all have our limits, so with a basic understanding of when to pick up on a hole, beginners are on their way to becoming “social” golfers.

The second situation of considerable anxiety is when a golfer joins a club and would like to play in weekly scheduled golf games. This is where a PGA professional can really help. There are a lot of factors that come into play when matching a new member up with established groups and/or long-standing members. Among the most important that a pro will consider equally are golfing ability, personality type, age, preferred time of day to play, gambling or not gambling, and more.

But above all, pace of play is still the factor that weighs the most. The quickest way to get shunned from any group of golfers or playing partners is building a reputation of being a slow golfer. Golfers might tolerate slow play in an event, because they know it’s a one-time thing, and don’t have as much control over the pairings. Those same golfers, who might put up with slow play if they get paired with a slow player in an event, will not go out of their way to call for a casual round, or let them play in a weekly golf group they organize. Even if a golfer is of slightly lesser ability than the rest of the group, they will be accepted as long as they pay attention to pace of play set by the group.

The third situation is a golfer who wants to play in club events–or perhaps has already played regularly in weekly club events, but wants to play in more serious competitions such as the club championship. Most golfers who desire to play in weekly club events are plenty good enough to play in any club event, but almost all worry about their skill levels when an event has the word “championship” in the title. Unless a player’s game is really not in the ballpark of the average scores, like shooting 118 on 18 holes and wanting to compete in the club championship, there are more important factors to fitting in to the competitive situation. Pace of play, knowledge of the rules of golf, knowing traditional golf etiquette, and being cordial are much more important. Again, that is as long as the difference in skill levels is not egregious.

I have had a front seat to hundreds, even thousands, of club events like these, and hardly ever do I hear complaints about quality of play being a deterrent to those wanting to play with others. However, rules of golf, pace of play, etiquette, and personality differences are 99.99% of the issues. Over and over again, those who cannot decide if they want to play in men’s day or ladies’ day, or whatever event, are concerned about not being a good enough golfer.

As much as I want all readers to improve at golf, I also want to make it clear that there are other factors that golfers need to educate themselves on to be a compatible playing companion. In summary, compatibility on the golf course is very much about affability and pace of play, and very little about quality of play. Know where to stand, know when not to speak, converse when appropriate, play fast, be gracious to others, try to play your best, don’t act like a two-year old when you are not playing your best, and you will have plenty of playing opportunities come your way.