All That Glitters Along the Costa del Sol 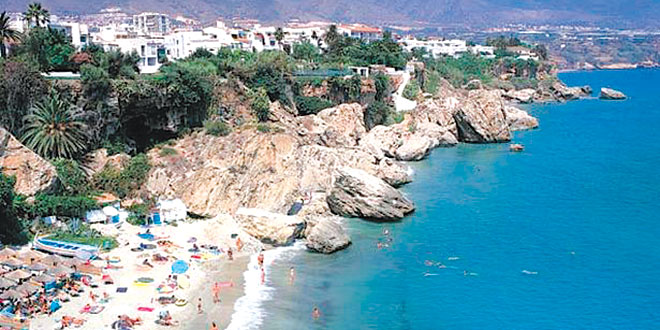 I’m currently traveling in Europe and exploring in southern Spain to what is known to all as the Costa del Sol.

My summer trip began with landing in the old city of Malaga. I have always loved traveling by the seat of my pants, so I rented a car with a GPS and then hit the road with no predestined hotel arrangements. Sure, it’s risky; it also keeps the trip interesting.

It was my first time in Malaga, and that made for a frustrating day for even my “trusty” Spanish GPS. It was confused by this ancient city and its maze of streets, — if you can call them streets — adding to that the fact the roads are always maddeningly one way that bring you to all opposite directions from where you have to go. You can see the hotel, but try to drive up to the entrance? Even with a map provided by the hotel receptionist (I finally found the hotel by accident!), I never found their special parking garage and used a public one I stumbled on instead.

The city of Malaga was really bustling with activity due to a huge religious festival, and that happened to include a slew of special end-of-the-summer bull fights. Though outlawed in one or two Spanish cities, it is a tradition still practiced here. A sport that is not for the squeamish; let’s leave it at that.

Walking around town, I discovered its beautiful citrus tree-lined boulevard with lush gardens that provided shade and followed the ancient Moorish city walls. It’s warm here, but comfortable with no humidity and a wonderful breeze off of the Mediterranean Sea. It’s not as hot as Marco Island, I’m sure.

There are crowds of people, but the many upscale boutiques and jewelry stores are eerily empty except with salespeople who appear listless and bored to near death. It’s no wonder. Spain has one of the highest unemployment rates in Europe, and the empty and boarded up store fronts lay testament to that fact.

Only here and now it is festival, and bars, cafés and bodegas are packed to the gills. Kinda reminds me of weekends on Marco in the season.

It’s been a fun two days, but I’ve got places to go and people to see. Time to pack up the car, and mosey on down the road. The famous fortress city and the world most renowned rock is less than an hour or so away to…Gibraltar!

Wow! It’s hard to explain the sight before me, but magnificent comes to mind. I parked the car in Spain and followed the crowd toward the towering edifice before me. It looks surreal, and draws everyone to it like a moth to a flame.

Soon a British soldier asks both my traveling companion and I for our passports. Customs? Yes, for now, we are on British soil (or should I say rock?). For those of you who do not know this fact, me included, Gibraltar is a small living and breathing city, with hospitals, supermarkets, elementary and high schools, and a better public transit system than we have at home!

The beautifully tree lined streets are crammed with retail shops of all kinds. Every other one was a duty-free jewelry store or a pub that sold fish and chips. Only thing is some shops required you to pay in English Pounds, and the exchange rate for our U.S. currency leaves a money spending Yank like me not much for his money. The military presence is obvious here. There is an air base and functioning landing strip you have to hurry across before you enter the rock, and the town is embraced by tall, unscalable wall that has been a fortress city for centuries.

Control Gibraltar; you control the entrance to the Mediterranean.

Spending one night in a hotel here costs more than I wound pay for five days in a nice four star hotel over the border in Spain. That’s less than a football field away. Adios Gibraltar!

Next city we ventured to was Marbella with its beautiful beaches and promenades. We decided to stay here for the night and poke around both the city and surrounding towns. We honestly visited a half a dozen or so, but none impressed us enough to stay long.

Traveling the Spanish southern coast is a breathtaking experience for it is extremely mountainous with hair pin turns, steep inclines and roller-coaster declines. Even the road signs warn the traveler that the impending trip is not for the faint of heart or novice driver.

The thing that impresses you about these southern coastal cities is almost every one of them has ancient castles and walls built by the Moors, who obviously dominated the Spanish coast 1,000 years ago, and that kind of history to me is never boring, although my wife will tell me, “You see one crumbling wall, you have seen them all!”

This is one reason why she has not accompanied me on this part of the trip. I’ll meet up with her in a week or so in Mallorca.

The Moor’s presence becomes even more unmistakable with our the next destination — the majestic city of Seville.

The city is a mixture of ancient Arabic and Christian architecture for Moorish and Spanish kings and queens alike, with a river flowing thru the center crisscrossed by both antique Parisian style and modern, flamboyant, high-tech bridge designs with huge castle walls as a back drop. The result is an eclectic jumble that somehow works, and that’s what makes this city so awe inspiring. Many of the female inhabitants, including small children, wear traditional costumes such as the bright and colorful, polka dot-design Flamenco dancing outfits. Some will join friends and perform in the streets. The music they dance to can simply be just the clapping of hands from onlookers. This city will invoke memories for many year to come.

The coastal towns are revelling in religious celebrations — that include obligatory bull fights — all day, all night, all week long. There is partying in the streets in Almeria, the last northern coastal city on the Costa del Sol. This is where we decided to stash the car for a few days and enjoy a wild and crazy Spanish festival first hand, and this city did not disappoint us.

Throughout the city, there were small roving “marching bands” literally invading a courtyard, bodega, outside bar or even an indoor restaurant. The bands stand on chairs or counters dancing and blowing all kinds of horns and beating drums. This crazy, unbridled, wild performance brings the patrons, wait staff and even chefs to an out of control frenzy of communal singing and dancing! It was impossible not to join the madness!

Then in an instant, there is silence, and they disappear into an alleyway to the next destination. What a hoot!

The seafood here at the festival is the best I have ever experienced, a tapas of simple bread, cheese and olives with aged thin sliced ham is heaven on earth.

Speaking of heaven! I found a line of jewelry that is now selling here in Europe that will be the next big thing since Pandora, and I will be the exclusive dealer of that new sensation on Marco Island this coming holiday season. More on that surprise later.