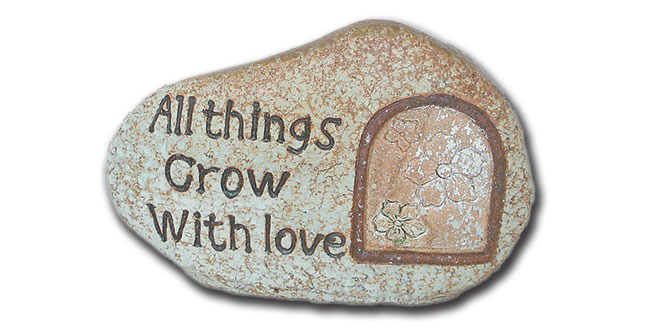 Upon entering the Marco Island home of Al Bismonte, you are greeted by a garden ornament with the message “All Things Grow With Love.” That is a theme that lives and flourishes in the heart of this man of many talents.

This “retired” pediatrician from Waukegan, Illinois enjoys a home that is filled with more than one hundred orchid plants. “They are not my hobby, they are my therapy,” says Bismonte with a smile. Surrounded by their beauty, Bismonte explained his secret in caring for these thriving plants. “Sometimes people think an orchid has died, but it is merely hibernating.” He advised that the best way to nurture an orchid is to replant it as soon as you get it. “Remove the moss that generally comes with the plants that you buy in stores and replace it with orchid bark in a new pot. The plant will then grow and be 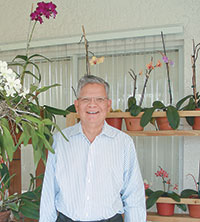 healthy.” Bismonte even has an “ICU” for orchids, caring for the plants of some friends.

In his yard, the landscape is filled with plants and trees bearing bananas, mangoes, star fruit, guava, pineapple and even jackfruit, a tropical fruit from Bismonte‘s native land of the Philippines. He says, “I like to have my yard filled with plants that are useful,” attributing that philosophy to his childhood of growing up, in his words, “poor.” 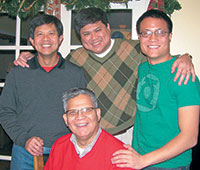 Dr. Bismonte with his sons.

you didn’t question or disobey your parents,” he said. When he completed his training in engineering, young Al showed his grades to his father. His father was so proud, as Al’s grades were excellent. But the young Bismonte confessed to his father that he didn’t want to be an engineer. He wanted to be a doctor. Bismonte’s father was opposed to this venture, as medical school was far too expensive for the family budget. But young Al was determined and promised to succeed. His father sought help from Al’s older brothers and sisters who had already completed school and were working. Collectively, with other members of the community, they fulfilled young Al Bismonte’s dream of attending medical school. He became a doctor specializing in pediatrics.

For many years Dr. Bismonte practiced pediatric medicine in Waukegan, a community north of Chicago, where he raised his three sons and became active in many civic associations. 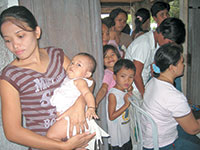 A mother holds her child; many mothers walk miles with their children for treatment.

In his Marco Island home, he proudly displays a photograph of himself with former astronaut Jim Lovell, commander of the Apollo 13 mission. The two were involved with a fundraiser, selling autographed copies of Lovell’s book about Apollo 13, originally titled “Lost Moon.” Also on display in his home is a gavel, given to him by Newt Gingrich. The recipient of many awards, Bismonte has always believed in giving back to his community. He has touched the community of Marco Island with his generous and active participation in the Noontime Rotary Club, the Knights of Columbus, of which he once served as Grand Knight, and as a Eucharistic Minister at San Marco Catholic Church.

As a pediatrician, his patients have always been a special gift to him, touching his life as he touched theirs. “One of my patients became an Eagle Scout and invited me to his installation,” Bismonte said with pride. Although 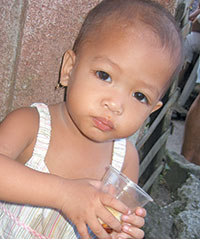 Submitted PhotosA young child at the clinic waits to be treated.

he considers himself to be retired, Bismonte occasionally returns to his former practice in Illinois, filling in for his former partner in times of her absence due to vacations or conferences.

Over the years, Bismonte frequently visited the Philippines. After his parents had both passed away, he stopped his visits. “It was so sad for me to return when they were gone,” he explained. Finally, he decided that he must go again to visit his sister. At the end of that visit, promising to return the following year, Bismonte said to his sister “Why don’t I do a Medical Mission next year?”

He returned the following year, participating in the Rural Health Clinic program, a government brand of clinics in the Philippines. The Rural Health Clinic would provide immunizations free of charge, but did not provide medicine for those who needed it. The clinic could write prescriptions, but the patients were responsible for the

The house where Al Bismonte was born, now the home of his Medical Mission.

cost. Unfortunately, most who were treated at the clinic were very poor and could not pay for the drugs. Blessed with never-ending energy and the desire to do more, Bismonte was struck with the idea of using his grandparents’ home, now vacant, as the site of his Medical Mission the following year. With the help of his nephew and others, the home was cleaned up and made ready for this new undertaking. Dr. Bismonte said, “This is the house where I was born.” How wonderful that the place of his birth would now become a place where he would give life to others!

January 2016 marked the 11th year of this mission. Seeing upwards of 60 patients a day, Dr. Bismonte began this endeavor by prescribing necessary medicines for his patients and paying the pharmacist for them at the end of each day with his own personal money. In subsequent years, he began 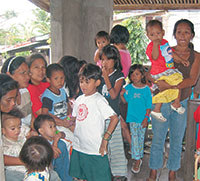 Patients lined up to be seenby Dr. Bismonte and receive needed medications.

ordering the medicines through his practice in Illinois and shipping the drugs to the Medical Mission in Baao. “I do it to thank those who once helped me. Even though I am not directly helping the ones who directly helped me, I want to help the community.” Dr. Bismonte is grateful for the generous donations for this cause that he has received from the Noontime Rotary Club and the Knights of Columbus.

Bismonte says that he sometimes sees mothers who walk many miles to the Medical Mission, waiting for many hours in hopes of receiving formula and vitamins for their babies. Many mothers bring their children in for treatment of infectious diseases only to return later with a recurrence of the same illness. Dr. Bismonte explained, “They do not realize that it is the whole family who must be treated in order for the disease to be cured.” Bismonte tells his patients to

Dr. Bismonte manages to see more than 60 patients a day at his Philippines clinic.

“make a wish” for whatever they want. Bismonte stood before the municipal council in Baao, stating, “Today I make a wish. I wish you could form a committee to address the need for infection control in public health.” He went on to tell them “Instead of you being represented to the public, the public needs to be represented to you.”

A simple black bag sits on a shelf in the home of Al Bismonte. It shows some wear and tear from the years, but that is the wear and tear of time, of love, and of healing. It is simply engraved “Albino T. Bismonte, Jr., M.D.”

Attending daily Mass at San Marco Catholic Church, Bismonte prays, asking God, “Please make me healthy enough to travel and please give me the resources I need to help those in need.” Blessed with the art of healing, empowered by his faith, Al Bismonte is the living proof that all things really do grow with love.