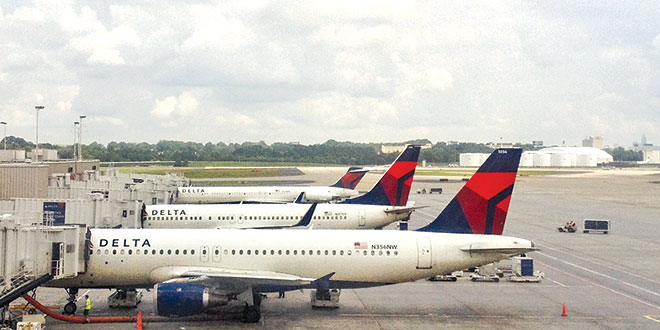 Passengers have rights if their flight is delayed or cancelled. SUBMITTED PHOTO

What are your rights as a passenger if your flight is delayed or cancelled or your luggage lost? Since 2009, the US Department of Transportation has issued some laws that ensure certain rights for domestic airline passengers.

Most airlines will charge you for the cancelled flight but then refund your money without penalty. I’ve read that some airlines allow a 24-hour hold option when booking, but if you opt out of that choice, they charge a penalty. Yes, it is confusing. Of course, if you cancel or change or flight after the 24 hours, you are subject to the airline’s cancellation fees, which can be as high as $200 for domestic flights and more for international. As of the writing of this column, Southwest Airlines was not charging a penalty for changed or cancelled flights. Conditions change quickly in the airline business, and this may no longer be true by the time this is published.

There also is a rule referred to as “involuntary refunds” that provides for full refunds if your flight is delayed more than a specified amount of time. The specific amount of time can vary by airline; you must check the fine print in an airline’s contract of carriage. You may also be entitled to a full refund if an airline makes a significant change in the departure schedule. Airlines don’t always notify you of changes, so it is important to always check your flight schedule prior to the departure day.

There are regulations ensuring passenger rights when there are delays on the tarmac. Airplanes are not permitted to remain on the tarmac for more than three hours (four hours for international flights), although there are exceptions for reasons of safety, security and air traffic control. After a two-hour delay, travelers must be provided with “adequate” food and potable water, and lavatories must be in good working condition and clean. Notification of delays of more than 30 minutes must be made at the gate, as well as on the airline’s telephone reservations system and website. Airlines that violate these rights are subject to heavy fines, as well as paying compensation to passengers. According to statistics from the Department of Transportation, from May 2009 to February 2010, before passage of this law, there were 664 delays of more than three hours among the major domestic airlines; subsequent to passage, from May 2010 to February 2011, there were 16.

Travelers bumped involuntarily from their flights are entitled to cash, not vouchers or discounts. Short delays for bumped passengers must be compensated at double the price of the tickets up to a set amount. For delays of more than 2 hours domestically or 4 hours internationally, the payment is four times the value of the ticket up to a set amount. If a flight is cancelled and you choose not to reschedule, you are entitled to a full refund without penalty. There is no compensation if the airline is able to get you to your destination within one hour of the original arrival time.

Airlines will try to compensate involuntarily bumped passengers with a voucher, discount, upgrade or frequent flier miles. Know that you are entitled to cash rather than these forms of compensations. Caveats include: you must have a confirmed reservation; you must have complied with the carrier’s check-in deadline (usually 10 to 30 minutes before departure time, although the deadline can be longer); rules are applicable only to planes that carry at least 30 passengers. Also, if you volunteer to be bumped for whatever the airline might offer, make certain that you have a confirmed seat on another flight. Airlines will sometimes try to have voluntarily bumped passengers fly standby.

If there is loss, damage or delay to your baggage, you are entitled to compensation. Carriers have different guidelines for reimbursement. For lost luggage, you can be reimbursed up to $3,300, but the airline has the right to ask for receipts or proof of purchase, and reimbursement is made based on a depreciated value for luggage and contents. That $25 or $50 dollars you had to pay to give them the privilege of carrying and losing your luggage? It should be refunded.

The US Department of Transportation publishes an online consumer guide to air travel at airconsumer.ost.dot.gov/publications/flyrights.htm#airfares. For European Union flights, this website is helpful: www.airpassengerrights.eu/en/your-rights-a-summary.html. Another resource is www.flyersrights.org. Airfare Watchdog has a condensed, non-legalese guide to the major airlines contracts of carriage at goo.gl/9AhEQB.

The Department of Transportation can apply penalties to flights that are chronically late as defined as a delay of 30 minutes or more over 50 percent of the time. I’ve noticed more and more that flights seem to be arriving earlier than the posted ETA; I wonder if the arrival times are being inflated to guard against complaints of delay.

From experience, I’ve learned that when trying to deal with a bumping situation or a cancelled flight, it may be more helpful to call the airline rather than dealing with the gate personnel. The gate staff may be overwhelmed with all the angry passengers; when you call the airlines, you have one person listening to just you. We once had a delayed flight from Newark to Washington, which was supposed to connect with a flight to Ft. Myers. Because of the delay, we were bumped from the overbooked Ft. Myers flight. It was late at night, and we were getting nowhere with the gate attendant. I called the airline, explained the situation, and quickly had a flight booked for the next day and a hotel arranged while other people who had been bumped just became angrier with no resolution.

Prior to deregulation of the airlines and the elimination of the Civil Aeronautics Board, when there was a delay or cancellation except for an occurrence such as an “act of God,” airlines were required by Rule 240 to offer booking on the next flight available even if with a competitor. If only first class was available, an economy passenger was entitled to that seat. A sparse few airlines still include this rule in their “conditions of carriage,” but my guess is you have to be aware of that stipulation and fight for it.

Finally, if you have a complaint about the violation of your rights as a passenger, airlines must acknowledge your complaint within 30 days and resolve it within 60. Unresolved complaints may be taken further to the FAA’s Aviation Consumer Protection Division via phone call, written or online communication.