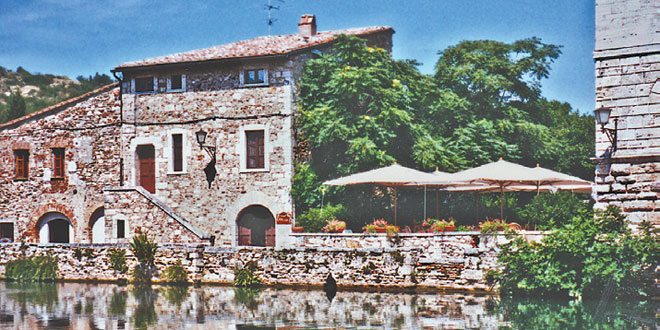 The abundant art in the cities. The countryside dotted with dark green cyprus trees and golden fields. The vineyards. There are so many wonderful places to visit in Tuscany, it is difficult to know where to begin when writing about this region of Italy.

Within the 10 provinces of Tuscany, there are the tourist draws of Florence, Siena, Pisa, San Gimignano. Then there are the small hill towns such as San Quirico d’Orcia, Castelnuovo dell’Abate, Sant’ Angelo in Colle, or the tiny La Befa that offer charm and not more than one or perhaps a few excellent restaurants.

Western Tuscany is home to Pisa where millions of tourists flock to see the iconic Leaning Tower. Actually, all of the buildings on Pisa’s Campo dei Miracoli lean, but none as much as its famous tower. If you must see it, then do, but also take time to stroll through the city to appreciate some of its other architectural treasures. A visit to Pisa is often combined with a stop at Volterra with its walled gateways, cobbled streets, Roman theater and major Etruscan museum and/or a stop at Vinci, birthplace of Leonardo da Vinci.

Northern Tuscany features Carrara, home of the famous marble quarries. Viareggio, an elegant seaside resort and Montecatini Terme, noted for its thermal waters and spas, are popular attractions when one tires of all that history!

My favorite place in northern Tuscany, however, is Lucca. Lucca is becoming a hot tourist 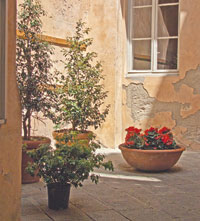 As you walk about the hilltowns of Tuscany, peak into the hidden piazzas attached to many of the buildings.

spot, but it is still relatively undisturbed by the hordes. Encircled by ramparts that have been turned into a parklike walkway makes them very inviting for bike riding, and rentals are available. Although considered a hilltown, Lucca is relatively flat which makes negotiating it very easy. The main square, Piazza del Mercato was originally the location of a Roman amphitheater. Palazzo Pfanner offers peaceful gardens; San Martino cathedral has its Volto Sano, an effigy of Christ at the Crucifixion believed to have been carved by Nicodemus, and Puccini’s birthplace has been turned into a museum. There are palazzos that can be visited and the view from the tree topped Torre del Guinigi is well worth the 227 step climb. Mostly, though, Lucca is a delightful place in which to stroll, have a leisurely lunch, and just enjoy.

Central Tuscany features many locations well worth a visit. At the center of the this area is Siena, my favorite city in Tuscany (see: www.coastalbreezenews.com/2012/11/15/tuscanys-second-city). The 14 remaining medieval towers of San Gimignano make it a very attractive place to visit, hence the many tour buses that unload there daily. If you are driving, arrive early, otherwise you may be faced with a frustrating time driving around and around until you find a car park with available space. As one of the highest hill towns in Tuscany, car free Montepulciano offers pleasant, if steep, walks among its churches, palazzos, and other Renaissance buildings. There are spectacular views, but the city 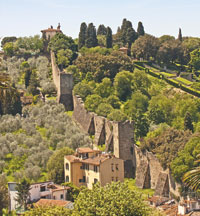 The Tuscan hillside is rich with hues of green.

And, while on the subject of wine, the area between Florence and Siena is the Chianti Classico wine region. Here are some of the prettiest landscapes of the region as well as a multitude of opportunities for visiting vineyards and wine tasting. Research vineyards before your visit or look for signs that say “vendita diretta”. Alternatively, stop at an enoteca, wine shop, in Greve in Chianti. It is here where the Chianti Classico wine festival is held the second weekend in September.

Another Renaissance jewel is the small city of Pienza, the setting for Zerfferelli’s film, Romeo and Juliet and now a UNESCO World Heritage Site. Situated in what is called the Val d’Orcia, the entire valley has been thus designated by UNESCO.

I found the tiny village of Bagno Vignoni to be quite charming. Due to its sulphurous springs and thermal waters, it has been a spa town since Roman times. The sulphur pool at Hotel Posta Marcucci is open to the public, or simply dip your feet in one of the springs below the village.

Other quieter places we have enjoyed in Central Tuscany are the Abbey of Monte Oliveto Maggiore and San Galgano. A dramatic drive through what is called the “Crete Senesi” or “badlands” leads to the cypress lined driveway of the Benedictine monastery established in 1300 at Monte Oliveto. The monastery’s artwork includes a fresco cycle begun by Luca Signorelli. Monks still live and

View of Lucca from the Torre del Guinigi. Photos by VICKIE KELBER

worship here. Check for opening times as it does close for a few hours during the day. It is best to visit on Sunday at 11:00AM or weekdays at 6:15 for Gregorian chants. Note that the evening chants begin after the visiting hours for the frescos, so plan to arrive earlier.

To me, the skeletal remains of the abbey at San Galgano, in the middle of a field, was one of the most evocative places we have been. The trip here is beautiful; through untamed countryside and fields of sunflowers. During the summer, the abbey is the locale for opera performances. Nearby is a church that has been built around the legendary sword in the stone thrust by San Galgano in 1180 as a symbol of his repentance.

Perhaps because we once spent a month on a vineyard in Montalcino, this small town, to me, is a perfect representation of a medieval walled hill town. Not overrun by tourists, it has a fortress, impressive views, some wonderful restaurants, and is known for its wine, Brunello di Montalcino, arguably the best wine in Italy. The nearby beautiful Romanesque abbey of Sant’ Antimo is well worth a visit; the monks chant their prayers at scheduled times throughout the day.

Many of you may already be familiar with scenes of Arezzo, in eastern Tuscany, as it was featured in Roberto Benigni’s film, “Life is Beautiful”. As one of what is known as the “twelve cities” of the Etruscan League, it is well

A medieval archery contest takes placeannually in Montalcino in the shadow of its 14th century fortress.

preserved . The Church of San Francesco has a Piero della Francesca cycle of frescoes, which some have called one of the best of the Renaissance. A large antiques market is held in the main piazza on the first Sunday of every month. Nearby Cortona is also well known as a result of Francis Mayes’ book and the subsequent film, “Under the Tuscan Sun”. Surrounded by 3000 year old Etruscan walls, it is another classic hill town offering picturesque views.

Southern Tuscany is not visited as much as some of the other areas. The Maremma is a diverse region offering rocky hills, verdant areas, beaches, and attractive coastal towns. Monte Argentario, once an island now connected to the mainland, is a popular resort. From Piombino on the coast, there is a ferry to the island of Elba, where Napoleon was exiled. Massa Maritima, inland, is yet one more scenic medieval city.

Note that the geographic regions I have designated are arbitrary; various guidebooks may use differing classification systems. No matter which region you explore, the history, beauty, food, and wine are sure to please.