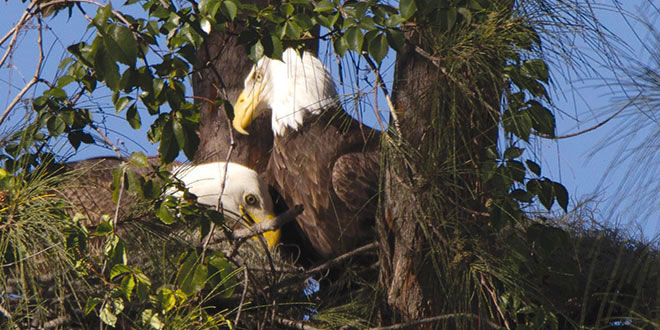 The new agreement replaces a five-year lease the district and the foundation entered in 2011 that was to expire in April. Approved unanimously by the Collier school board, the lease-purchase agreement calls for continuing the $30,000 monthly lease payments, with the foundation having the option to buy the land, based on the average of two appraisals at the time of sale. The new, five-year agreement takes effect October 31, and its provisions allow for an extension to be requested within the first three years.

“It’s been a long set of circumstances,” said the Eagle Sanctuary Foundation’s founder and chairman, Carl Way. “We really feel great about it, not only for the eagles, but in saving the last piece of green space on the island that can have some community value. It feels great that the residents and the district have recognized that this has value to the community.”

The 11.6-acre, undeveloped parcel is home to a nesting pair of federally protected American Bald Eagles, along with other birds and animals. The land had been at the center of a battle between the foundation and the founders of the Marco Island Academy (MIA), as well as both organizations’ supporters.

The school board approved the new lease-purchase agreement at its meeting last week. The board also passed a motion calling for studying the feasibility of buying the San Marco Road property, with the possibility of using the proceeds from the sale of the eagle sanctuary for purchasing the school site.

It’s a concept – the district’s purchase of the MIA site – that would be backed by the foundation.

“We would publicly support that position in the community if the board chooses to do so,” said Way. “MIA needs a permanent home and we would very much support anything the district can do to make that happen. The foundation and I think the high school has a place on this island and having found a way to work together to achieve that goal is a good thing.”

Way said the old lease agreement with the district only allowed the organization to protect and maintain the property. Now, with the new

lease-purchase agreement, the group can follow through with plans for walkways and viewing stations, additional trees, a small parking area and more, he added.

“We have a full set of plans for the ongoing future of the nature center,” said Way.

He said the agreement also includes a clause calling for the deed, when it is turned over to the foundation, to state that the land remain a passive nature sanctuary that can never be developed for commercial or residential purposes. If a condition arose where another use was sought other than a nature center, the ownership of the property would automatically revert back to the school district, Way added.

With the lease-purchase agreement in place, the foundation can also begin soliciting donations for the funds needed for the purchase and the improvements to the property. Way said the organization will reach out to not only Marco, but to the entire state of Florida for the funds. “We hope to get this done within 18 months,” he added. “That’s our goal. We have a number of large commitments that will get us started.”

“We’re currently working on the budget for the project, which would include the current value of the appraisal, which is $1.95 million if we were to settle on it today. We can’t determine the total construction costs and property improvement costs yet. Our initial fundraising will be to cover the purchase of the property. The secondary fundraising process will cover all improvements, including the learning center, trees, et cetera. We hope to get the initial fundraising done within 18 months.”

The foundation’s plans also include creating a children’s learning center where they can “learn about how the ecosystem works, the vegetation, the animals and what that all means to the creatures that live there in harmony with the rest of the neighborhood,” said Way. He said erecting the learning center would not occur before the property’s purchase is finalized.

Also on the drawing board is a contest for district schools in which students will draw up a plan for improving the ecosystem at the eagle sanctuary, their school or a park in their neighborhood. The foundation would provide project funds for the winning entries and the students would be involved in performing some, if not all, of the needed work.

“We want to give them an understanding and appreciation of the ecosystems that we have,” said Way. “They’re the ones that are going to have to save this property and others for future generations.”

He said the Marco Eagle Sanctuary has become another of the island’s nature-associated attractions that enthralls residents and visitors alike, just like Marco’s beaches, burrowing owls and aquatic creatures.

“I can’t tell you how many times I’ve heard a visitor say, ‘I’ve never seen an eagle,’ and they’re in their sixties and seventies,” said Way.