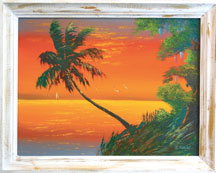 I am so excited today, I’m grinning from ear to ear and my heart’s skipping like a 10 year old with a jump rope. Picture jump-roping. Now picture jump-roping and typing at the same time  – this could get messy.

The Highwaymen are coming. Well, their paintings are. Against All Odds: The Art of the Florida Highwaymen is coming to the Marco Island Historical Museum December 10 and will be on display through February 29. The exhibit is aptly titled for the group of over two dozen African-American artists from the Ft. Pierce area, who, in the 1950’s and 60’s, persevered through racism, ostracism, and mosquitoes, to produce what many consider the origins of the Florida Regional Art tradition.

I first wrote about the Florida Highwaymen a year ago today in this newspaper. They were denied access 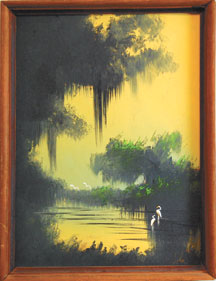 to formal training and exhibition venues (and bathrooms, and restaurants and motel rooms). So they painted outside in Florida’s brilliant subtropical wilderness – usually on inexpensive Upson board and framed with crown molding. They sold their art from trunks of cars along 2-lane highways. Their camaraderie solidified at the studio of white (bear-poking, beehive-kicking) landscape artist A.E. ‘Beanie’ Backus, a safe haven where they could learn from each other and share artistic philosophies. They prevailed through persistence and unmitigated temerity. And they are heroes to me.

A year ago I referred to those times as “the days of the segregated South,” as though racism no longer existed. I regret that, for on a daily basis I meet people whose prejudices are so deeply rooted as to escape their own introspection (“I’m not a racist, I just don’t think…blah, blah, 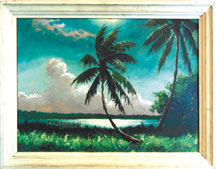 blah…”). So sad. But if the story of the Florida Highwaymen teaches us one thing, it’s that art has the power to transcend boundaries and transport visions. I’m sorry it didn’t happen in time for so many, I’m comforted it happens at all.

The exhibit is on loan from the Orange County Regional History Center in Orlando and includes the work of 26 Highwaymen plus a painting by ’Beanie’ Backus (another hero).

For more information about the Marco Island Historical Museum, this exhibit and related events, contact the Museum at 239-642-1440, on the web at www.collier museums.com

Tara O’Neill, a lifelong artist, has been an area resident since 1967. She holds Bachelors Degrees in Fine Arts and English from the University of South Florida, and currently has a studio-gallery at the Artist Colony at the Esplanade on Marco Island. Contact her through www.tarao gallery.com.