Aerospace and Rocketry at Camp Mackle 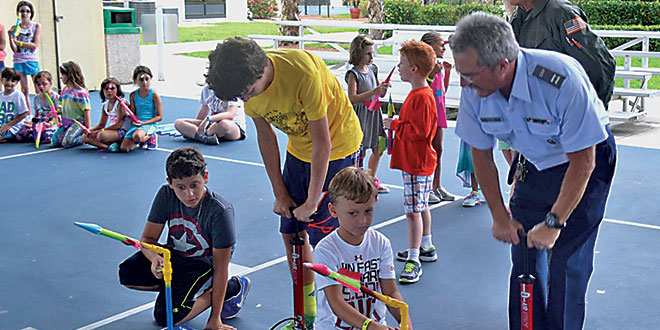 Captain Jesse L. Baker told the campers about the services that CAP provides to the community, and its three main missions: Aerospace Education, Cadet Programs, and Emergency Services. The squadron constantly practices search and rescue exercises to always be “mission ready.” Captain

Baker explained CAP’s weekly air patrols of the Wilderness Water Way of the 10,000 Islands and parts of the Everglades.

Flight crew member, 1st Lieutenant David Dumas, wearing his distinctive, fireproof USAF flight suit, gave the children an overview of the kind of gear, planning and teamwork that is needed to fly a search and rescue mission.

Major Marian Motyl-Szary explained the important role aerial photography can have after a disaster.

Captain Baker presented scaled models of different types of rocket engines and discussed their differences and applications with the campers. 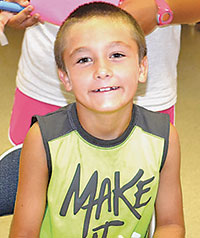 [/caption] class=”alignright size-full wp-image-59494″ src=”http://www.coastalbreezenews.com/wp-content/uploads/2016/08/A28-CBN-08-19-16-5.jpg” alt=”A28-CBN-08-19-16-5″ width=”200″ height=”238″ />After the presentations, the children built their very own air-powered paper rockets. In addition to having fun, campers learned principles of aerodynamics, as well as teamwork and experimentation. Using paper, tape and small rods, the children formed the rocket fuselage. Once the fuselage, fins and nose cone were assembled and taped together, everyone went out to the launch pads or basketball court.

Working in two-person crews each child had a turn pressurizing and launching their rockets. The “fuel” or air pressure was provided by two launching contraptions, in which a 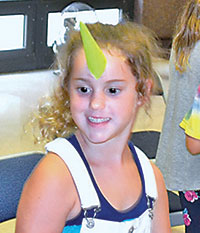 large bicycle pump was connected to a pipe assembly. Due to the unique nature of each individual rocket design, the rockets’ flight paths varied; some flew like arrows the length of the court, gaining lofty altitudes, while others corkscrewed in an erratic
flight path.

A few clowns emerged among the children; for instance, several creative girls used the extra rocket nose cones to tape a unicorn horn to their forehead.

Captain Baker said, “Everyone had a great time. Looking ahead, I’d say I can see here future engineers, commercial pilots and scientists. The sky’s
the limit.”