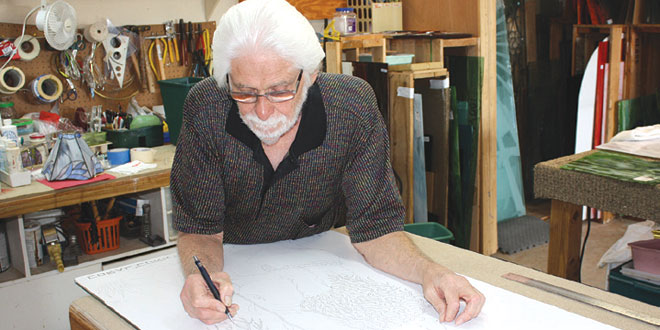 Stan Saran slowly sketches an AiR’s design onto the white paper adhered to the glass.

The windows at St. Mark’s Episcopal Church are receiving a makeover – again.

On Sunday, January 6, 2013 the church unveiled beautiful handmade stained glass windows to mark the beginning of the Christian season known as Epiphany, which celebrates the visit of the three wise men to baby Jesus, guided by the Star of David. The brightly colored pieces were hung over all ten windows in the worship hall, and all were designed and created by members of St. Mark’s.

Just as Epiphany brings the story of Jesus’ birth to a close, the season of Advent celebrates the approach of his birth. This Christmas season, St. Mark’s will unveil a new set of handmade windows to be hung in its worship hall, this time using a method known as etched glass.

The “Artists in Residence” (AiR) program, created by members of the church, is responsible for these beautiful and creative projects, among others thought up throughout the years. Many of the members are first-time artists, but all have utilized the guidance of professionals to create both the stained and etched glass windows to be revealed on Sunday, December 1 during the regular Sunday morning services. The windows will hang throughout the season of Advent. All ten artists will be present, along with their two mentors, Don Jones and Stan Saran.

In order to create the first ten stained glass

Mary and Elizabeth, conceptualized by Katie Goetzmann and re created by Stan Saran.

windows, AiR called upon local firefighter, stained glass artist and church member Don Jones and his wife Elaine. The two taught the members how to design and create the windows at their home studio where they create commissioned works through their company, Don and Elaine’s Art Glass Studio.

But when it came to the idea of etched glass windows, an extra pair of professional hands was needed. Don called on friend, Stan Saran, a world-renowned artist known not only for his etched glass work, but also for his innovative approach to fabric printing and design. The master of air-brushing, photo silk screening and heat transferring designs onto silk chiffon also happened to have mastered the art of etched glass along the way.

Self-taught, Saran’s technique and lifelike figures come from carving “deep into the back side of the glass in a very detailed series of multi-level stages… an ‘intaglio’ carving… which creates an illusion because it becomes a ‘bas relief,’ carving when viewed from the ‘other side,’ or the finished side,” he explains.

Saran started carving glass in 1976 – 43 years ago. Three years ago, he took on Jones as an “apprentice.” The two have been working together on the project for St. Mark’s for quite some time. The extremely intricate process of etching glass can be “painfully slow at times,” admits Saran.

Throughout his etched glass career, Saran has worked 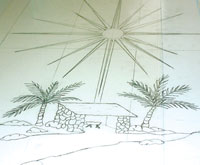 A masterpiece in the making.

on a commission basis. Someone comes to him with an idea in mind, he draws out the design, presents it to his client, and with the ‘okay,’ begins the process. “I work alone,” he says of his normal approach to creating art. Every piece ever made by Saran has been an original creation from his mind transferred to the glass.

While he considers himself retired, having closed his Marco studio on Front Street in 2006, Saran is still in high demand. “I guess artists never quit. We just keep going, and it’s nice to be wanted like that.”

And wanted he was – by the members of AiR. But this time around, it would be different for Saran because the drawings had already been made. This would be the first time he would use another person’s original idea and actually re-create an image, rather than create it from the start.

The window panes, which stand nearly five feet tall and measure about two feet wide, were all designed by a different member of AiR. Ten individual artist designs were chosen for the ten windows in the worship hall. This time around, however, the work became a bit too intense to teach the process of sandblasting glass to the artists. So Saran, Don and Elaine took on much of the project when it reached it’s final stages.

Every piece of glass was first 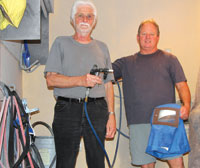 This is where all the magic happens. Stan and Don stand in the sandblasting room.

covered with a white sheet that adhered to the glass side. With a pencil, Saran recreated each drawing, using different shadings or lines or patterns to indicate depths at which the glass would be blasted to. Then, each and every pencil line is carved with a razor blade. Depending on depth, the carved sections are removed, sandblasted, and then the next layer is done, and then the next, and so on. Again, through the use of Jones’ at home studio, the ten pieces were made and finished just in the nick of time.

The AiR artists’ visions were literally brought to life, such as the scene of Mary, pregnant with the baby Jesus, sharing her joy with Elizabeth. It is easy to share in the feelings of joy, anxiousness and worry expressed on the women’s incredibly lifelike faces. Right down to the wrinkles around their eyes and the detail of the knuckles on their hands, the etched glass figure is simply remarkable – as are the other nine.

To learn more about the stained and etched glass artists, visit Don and Elaine’s website at www.donandelaineartglassstudio.com.