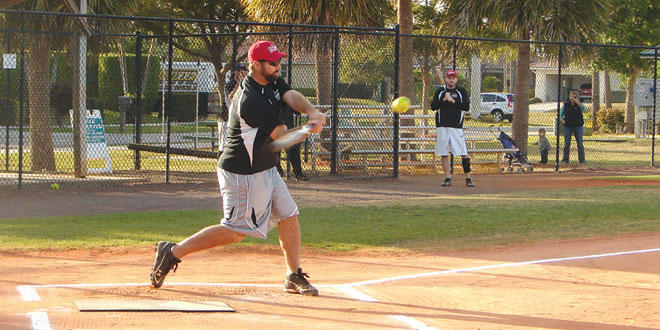 The game started out much like the last match-up. Cocomo’s taking the early lead with one run and Island Pizza picking up six runs in the first inning. The second inning saw great field work by both teams and the score remained the same into the third. Then, Island Pizza showed exactly why they had won 14 games. With the wind keeping the big bats of Cocomo’s in check, Island Pizza proceeded to strategically place the ball in all the right spots and when the inning was over, Island Pizza had notched 13 runs on what can only be described as a hitting exhibition. They led 19 to one after three innings. While Island Piazza seemed to be getting all the breaks and finding all the holes in Cocomo’s defense, Cocomo’s couldn’t really get anything going. Finding itself deep in the hole, Cocomo’s needed to pick up seven runs in a hurry to avoid losing the game by the 12 run mercy rule. Marc Canady, getting his second hit of the night, started off the 4th inning with a single and made it around the bases for one run. But that was about all Cocomo’s could muster. Island Pizza added one in the bottom half and after Cocomo’s couldn’t notch any runs in the top of the fifth, the game was called due to the mercy rule.

The regular season was over, and Island Pizza had captured the Regular Season Championship with a final score of 20 to 2 over Cocomo’s. Island Pizza had 20 hits as a team with 19 singles. Eric Nagel having four, Neil Alberry with three and Pat McGuire having the only extra base hit with a home run.

In the other games of the night:

Thursday, March 21st hosted the quarter-final rounds for the Adult Softball Championship Tournament. As of press-time, the game was yet to be played. However, on Thursday, March 28th, the top four teams from the 21st will play at 6:15 and 7:30 PM at Winterberry Field. The two winners will go on to the Championship game to be held on April 4th.

REMINDER: Co-Ed Softball begins in mid-April. if you are interested in having a team, contact Alex Galiana at 239-389-5196. Limit is six teams total.