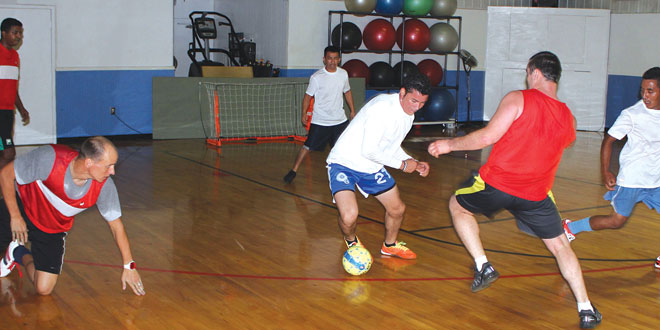 A new program for adults has begun and is already sparking a high interest from players and observers alike. It’s Adult Indoor Soccer or” Futsal” and it made its program debut at the Greater Marco Family YMCA What is Futsal? The name is a conversion from the Portuguese futebol which can be translated as “hall football”. The sport was developed in Brazil and Uruguay, in the decade of the 30’s and 40’s due to the lack of available football fields. Futsal has become one of the most popular sports attracting world championship status. It is not one of the most popular spectator sports but the most practiced. Many famous international players began their careers playing Futsal. The indoor surface, less bouncy ball and Futsal rules create an emphasis on improvisation, creativity and technique as well as ball control, passing in small spaces and team play. This summer program is open to all adults 18 and older, and space is available for more teams. The games will be 4v4 play with no goalkeeper and play to modified indoor soccer rules. Marco YMCA Soccer Coach John Patterson is the league coordinator and referee and has high hopes for this league, played in an air conditioned gym, to be hugely successful. Teams consist of 6 players with one being the team captain. Pre-game assembly will be at the South End Soccer Field where players can warm up. Games are scheduled on Saturday and Sunday afternoons starting at 12:00 p.m. and continue to 3:35 p.m. The fees are $10 per week per player and a team sponsorship of $100.00 is available. If you would like to enter your team in the Adult Soccer League and join teams from Davide’s Italian Restaurant, Marco Town Center Cleaners, Da Vinci’s Ristorante and others, please contact Coach John Patterson at 239-248-2715.