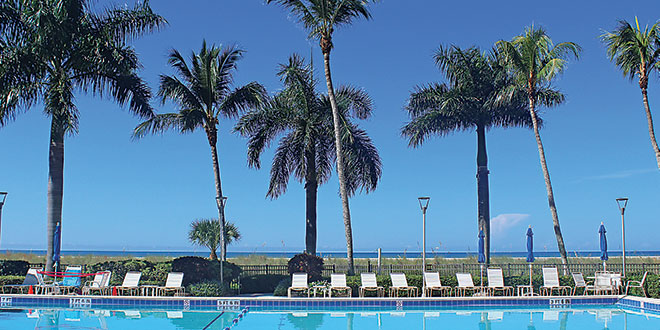 Photos by Samantha HustedAll of the lighting both interior and exterior, as see here, has been replaced with LED bulbs.

For the past eight years, Admiralty House, a 43-year-old 17-story condominium on Marco Island, has been making strides to become more energy efficient.

“Our goal was to improve the infrastructure of our 43-year-old building with the best products available,” said Frans Jungslager, board president and retired electrical engineer. “Offering long life, less maintenance and the most energy savings.”

Since 2008, Admiralty House has replaced the old electric motors for their domestic water system and for the cooling tower recirculation system with new motors with variable frequency drive controls. These controls match the speed and electrical consumption of the motors with the load, which substantially reduces the electrical cost to operate.

“I did a lot of energy studies for buildings,” said Frans Jungslager. “About eight years ago I said this building needs to do some things that are more energy efficient, because we are wasting energy.”

In addition, Admiralty House has installed a new

Frans Jungslager in front of one of the cooling towers on the roof.

The most recent changes include going completely LED (light emitting diode) for the interior and exterior lighting. This included the replacement of approximately 550 hallway and stairwell lights with LED bulbs. The savings in the cost of electrical consumption over a time period of approximately six months paid for the cost of the lamps. New fixtures with LED lamps, together with new conduit and wiring were installed in all of the 200 carport stalls.

LED lighting was also installed by the pool and around the exterior of the building. Energy cost savings allowed for the installation of additional lighting alongside the incoming

Ever wondered what an elevator looks like from above? Recently Admiralty House replaced both of their elevators with this top of the line model.

driveway, which together with a new camera system provides increased security for the building occupants. LED lighting offers 50,000 hours of lamp life as opposed to 8,000 hours for compact fluorescent lamps and 1,500 for incandescent lamps. This means interior lamp replacement only once every six years and exterior lamp replacement only once every 15 years.

Admiralty House has also replaced the elevators, which were as old as the building. The technicians calling even calling them “antiques.”

“We have new elevators that we’ve installed, which are really fabulous. They told us that these are the same elevators that are the latest, state of the art, that they put in the tallest building in the world.” Said Frans Jungslager.

The board of directors for Admiralty House is proud to have the building infrastructure brought to current standards, without special assessments or an increase in the maintenance fee. The changes made increased the values of the building and each owner’s investment.