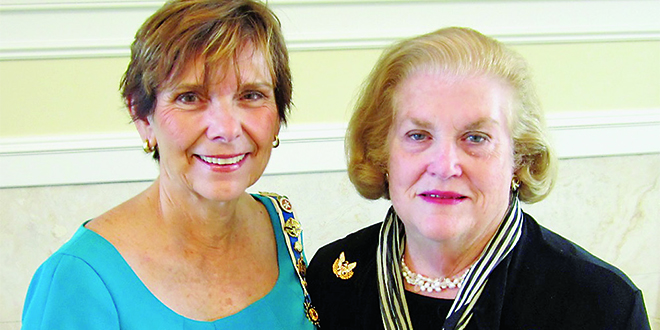 Action packed is one way to describe the recent meeting of the Marco Island Chapter of the Daughters of the American Revolution (DAR).

DAR member Nella Neary is one of 68 Army Arlington Ladies, women representing the Army Chief of Staff at Army veteran funerals held at Arlington National Cemetery. There are Arlington Ladies for each branch of the military. The mission of Arlington Ladies is to ensure that no veteran is buried alone.

The Arlington Ladies were started in 1948 by Air Force General Hoyt Vandenberg who noticed that some fallen military members were buried with no friends or relatives present. When he told his wife, she mobilized members of the Officers Wives Club to begin attending funerals. Today, all branches of the military are represented by Arlington Ladies at each of the nearly 30 funerals a day.

“We are there,” Nella said, “with an escort, a driver and a chaplain or other clergy. We stand at the graveside as the remains are brought in. If family is present, we greet them at the service. After the flag is presented, we give the family a condolence card from what we call the Army Family. Sometimes loved ones are not able to travel to the cemetery. So, what we’re doing is paying homage to soldiers who have given their lives for our country.”

Nella told the story of a small pin she wears on her suit. “I attended one funeral with no family present. Back in the car, I heard rapping on the window. It was a group of men on motorcycles, dressed in black leather gear with American flags. They handed me little pin, thanking me for being there. I said, ‘but I’m not family.’ They said, ‘We know, but you were there for our fallen, and that was our mission too.’

“At another funeral on a very cold day, there was just an elderly widow. She didn’t have a coat so I offered 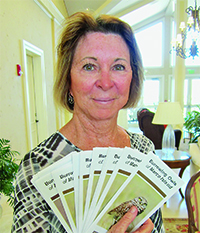 her mine. She said, ‘No, my husband tolerated this during the war. If he was cold then, I can be cold for a few minutes now.’” (To learn more about the Arlington Ladies visit www.arlingtoncemetery.mil/Funerals/About-Funerals/Arlington-Ladies.)

Lou Basch, a DAR member and a Marco Island burrowing owl watcher, was next to speak. Most Marco Islanders are familiar with our burrowing owls, but Lou covered the basics. “Burrowing owls live underground in burrows that usually have been dug out by other creatures, such as gopher tortoises, humans with a trowel or they dig them out themselves. You can recognize them by their brown spotted feathers, long legs and distinctive yellow eyes. At 9” tall, they are among the smallest owls in North America.”

When the City of Marco Island began monitoring burrowing owls in 2001, not many owls were recorded. Now, with government protection and with the oversight of Owl Watch volunteers, there are about 400 owls, even with urban development at an all time high. And, if you have the right conditions on your property, you can dig a “starter” burrow to encourage owls to nest on your property.

Volunteer Lou Basch pointed out that not only are they cute and entertaining, “They are excellent pest control, eating rodents, amphibians, snakes and insects, including roaches and crickets.” Last season, 266 adult burrowing owls in 181 burrows produced 220 chicks that survived. To learn more, contact Audubon of the Western Everglades Owl Watch Program, 239-643-7822, owlwatchmarco@gmail.com.

Every year, Marco’s DAR honors the middle school winners of its American History Essay Contest. Because the National Park Service turned 100 in 2016, America’s National Parks was the subject of the contest this season.

The winners from Marco Island Charter Middle School (MICMS) are Kai Spitzer (6th grade), Alonna Anderson (7th grade), and Stephanie Carter (8th grade). After they read their essays, Regent Karen Lombardi presented them with a certificate and a medal.

The Marco Island Chapter of the DAR was established in 1976. It has 73 members, including associate members. Monthly luncheon meetings are at 10:30 AM on the third Thursday of each month. Potential members and visitors from other chapters are welcome. Please contact Karen Lombardi at 239-394-0028.